The boys from Syracuse 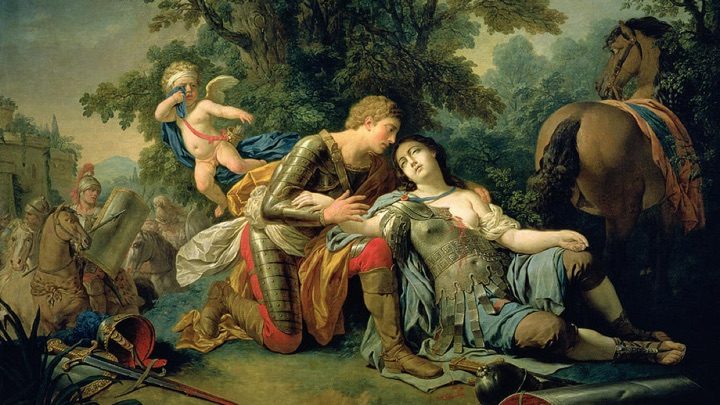 Trove Thursday has hosted pairs of performances more than a dozen times since it began. Sometimes they’ve offered a chance to compare significant interpretations like Joan Sutherland and Beverly Sills in Lucia di Lammermoor or Gwyneth Jones and Julia Varady as Fidelio’s Leonore.

There have also been alternate editions of works like Gluck’s Orfeo ed Euridice/Orphée et Eurydice and Verdi’s Don Carlos/Don Carlo.

This week’s Tancredis present markedly different approaches to Rossini’s melodramma eroico, one of his earliest successes. Queler uses the then-newly-rediscovered tragic ending composed for Ferrara a month after the opera’s premiere at La Fenice in 1813. Jacobs, conducting a period-instrument orchestra and using a fortepiano for the recitatives, sticks with the Venice original.

I dropped the ball last month when I missed the opportunity to program this Opera Orchestra of New York “pirate.” It could have then celebrated three January birthdays: Queler’s on the 11th, followed by Horne’s on the 16th and Ricciarelli’s the 18th. All three ladies are happily still with us, and today Trove Thursday salutes them as well as the composer whose birthday arrives (although not this year) on February 29!

Soon after the OONY Tancredi took place, I ordered the in-house recording on a reel-to-reel tape (as well as one with the group’s Oberon with Nicolai Gedda which had been performed a month earlier) and played it obsessively. The only bit I had previously known was “Di tanti palpiti” from Montserrat Caballé’s splendid Rossini Rarities LP.

Horne had only recently taken on the role and I was eager to hear her. She was in prime form but the revelation for me was Ricciarelli whom I had never imagined in this florid repertoire. She and Horne blended magically in the two marvelous extended duets that predate by a decade the more celebrated ones I knew from Semiramide.

After her debut there as Mimi in 1975, the Met presented the Italian soprano almost exclusively in Verdi works. Though Ricciarelli sang Anna Bolena in Modena the year before, I’ve always thought this ravishing, high-profile Amenaide stood as a crucial turning point toward the Rossini-Bellini-Donizetti nexus that would take on increasing importance for the remainder of her career.

While her early roles included Giulietta in I Capuleti ed I Montecchi (like Renata Scotto before her, she had a tenor Romeo), Ricciarelli moved more and more into the early ottocento after Tancredi. I was surprised to learn that she had performed at least nine other Rossini operas: Bianca e Falliero, Il Viaggio à Reims, Le Siège de Corinth, Guglielmo Tell, La Donna del Lago, Armida, La Gazza Ladra, Semiramide, and even Il Barbiere di Siviglia.

Besides Capuleti there were a number of Norma encounters as well as a rare staging of the so-called “Malibran version” of I Puritani.

Though she was undertaking such ill-advised recording projects as Turandot under Herbert von Karajan and Aïda with Claudio Abbado (unlike the Puccini role. she also sang the Egyptian princess on stage in London and Berlin), Ricciarelli was simultaneously exploring nearly as much Donizetti as Caballé or Mariella Devia. In addition to the inevitable three Tudor Queens, she also undertook a pair of Marias—de Rudenz & di Rohan—as well as Poliuto and L’Esule di Roma, in addition to old standbys Lucia and L’Elisir d’Amore. She even appeared as the Marquise in Le Fille du Régiment in Peru opposite Juan Diego Florez as Tonio!

Besides Tancredi, her only other New York appearance in this repertoire was in Lucrezia Borgia, again for Queler and OONY in 1980 opposite Dalmacio Gonzalez and Matteo Manuguerra.

Many may be surprised to find Fink cast as Jacobs’s hero as she is most noted for concert and recital work but very little opera. I’m probably not alone though to have first become aware of Fink as the noble Cornelia in Jacobs’s landmark complete Giulio Cesare on Harmonia Mundi. But she had, in fact, appeared as Teodata on Jacobs’s recording of Handel’s Flavio two years earlier. It’s one of my favorite Fink portrayals along with her Erissena in Fabio Biondi’s much-abused Poro. Both of her roles are secondary, slightly buffa characters enlivened by Fink’s unexpectedly delightful teasing characterizations.

Who knows why her appearances in staged opera have been few? There was a Madrid Idamante and a Lucio Silla Cecilio in Vienna as well as a dire Salzburg Festival staging of Handel’s Theodora. Her Penelope in an Innsbruck Festival Il Ritorno d’Ulisse in Patria did serve as the basis for Jacobs’s recording. More recently she’s done Geneviève in several staged and semi-staged Pelléas et Mélisandes.

Other than a concert of Ferrandini (the faux-Handel Il Pianto della Maria) and Bach at Alice Tully Hall with the Freiburg Baroque Orchestra, My other live Fink encounter was in Paris where she performed a moving Sesto in La Clemenza di Tito during a tour preceding the Jacobs recording.

Though it’s not surprising that Jacobs would invite her for his rare excursion into Rossini, I don’t know of any other bel canto roles in her repertoire. I’ll be interested to read what others think of her Rossini, especially in partnership with another baroque specialist, Rosemary Joshua whom I’ve only heard in Handel: as Angelica, Iphis (with Jacobs) and Cleopatra as well as Messiah.

Brownlee’s Paris Argirio followed hard on the heels of his Met debut as Almaviva in Barbiere. I’m delighted his early Rossini seria portrayal affords me another opportunity to tout his terrific recent Amici e Rivali CD with Michael Spyres.

Both versions of Tancredi can be downloaded by clicking on the icon of a square with an arrow pointing downward on the audio player above and the resulting mp3 files will appear in your download directory.