Starring Jamie Barton, Orfeo ed Euridice returns to the Met next month for the first time in more than a decade so “Trove Thursday” offers two complete live versions of Gluck’s masterwork. 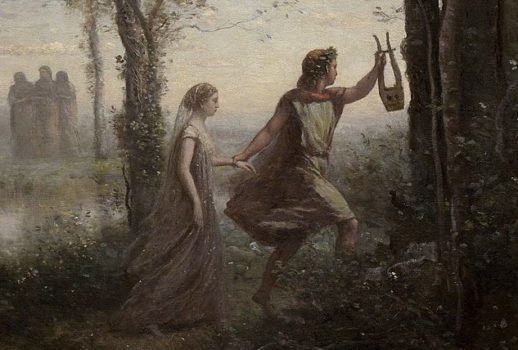 First we’ll hear a rare one for mezzo in Italian with Janet Baker, Pilar Lorengar and Sheila Marks from 1968 and the other for tenor in French with Nicolai Gedda, Jeanette Pilou and Christiane Eda-Pierre plus a rare early faux-Gluck Marilyn Horne Orfeo bonus.

As far as I can tell Baker sang just three operas in the US, all in concert form. During her New York City debut season here she first famously appeared as Smeaton in Donizetti’s Anna Bolena at Carnegie Hall with Elena Souliotis (in her NYC debut), Marilyn Horne and Placido Domingo.

Five days later she returned to Carnegie for Amastre in Handel’s Serse with Teresa Stich-Randall and Maureen Forrester. This San Francisco Orfeo followed in two years and then nothing until two decades later when Baker made her unannounced US farewell at Carnegie Hall on 4 May 1988 as Gluck’s tragic hero with the Oratorio Society of New York.

Of course, I couldn’t miss that so I flew in as I did the previous year to hear Baker perform Mahler and Mozart with the Orchestra of St. Luke’s. As she had already bid adieu to staged opera in the UK years earlier, I knew the Orfeo would be my only chance to hear her in opera.

Although the chorus was gigantic and the orchestra very old-fashioned-sounding, Baker’s blinding intensity made the evening extra-special. I most remember that at the end of “Che farò” she boldly charged ahead to the following recitative frustrating anyone who wanted to applaud her searing rendition of the aria. During the fervent ovations at the end she more than once held her score high directing our attention to Gluck rather than to herself.

Gedda’s colleagues and conductor performed Orphée in a staging by George Balanchine at the Paris Opéra during the first year of the Rolf Liebermann regime. They eventually traveled to Italy to do this broadcast with RAI.

Gluck’s opera began life in 1762 in Italian in Vienna with the famed castrato Guadagni in the title role. It is this version that Barton will be performing at the Met next month.

It lacks the famous “Dance of the Blessed Spirits” but includes an extended concluding suite of dances presumably to show off the choreographic side of Mark Morris, the production’s director.

Twelve years after its premiere Gluck revived the work in Paris with substantial revisions: the text was now in French and Orphée was a tenor. This became the basis for the version Berlioz concocted in 1859 for the famous mezzo Pauline Viardot.

As with many 20th century performances, the Baker and Gedda recordings contain some bits of the editions mentioned above. If anyone still has his copy of the first volume of Alan Blyth’s essential Opera on Record, Max Loppert reviews all the current recorded editions of Orfeo (c. 1979) and includes an extraordinary four-page foldout delineating all the variables of four important versions of Gluck’s work.

One addition made in Paris was the giving the hero a coloratura aria at the end of the first scene. For a long while it was assumed to be by Gluck himself but it turned out that “Amour viens rendre à mon åme” was actually a translation of “Addio miei sospiri” from Orfeo composed in 1776 by Ferdinando Bertoni.

When Horne sang Gluck’s hero, of course she included it whether performing the role in Italian or French. Bertoni’s aria in Italian is included here taken from one of her earliest captured outings as Orfeo and conducted by Charles Mackerras.

Each version of Orfeo/Orphée as well as the Horne dazzler can be downloaded by clicking on the icon of a square with an arrow pointing downward on the audio player above and the resulting mp3 files will appear in your download directory.

In addition, more than 260 other podcast tracks are always available from iTunes for free, or via any RSS reader. The archive which lists all “Trove Thursday” offerings in alphabetical order by composer has been recently updated.