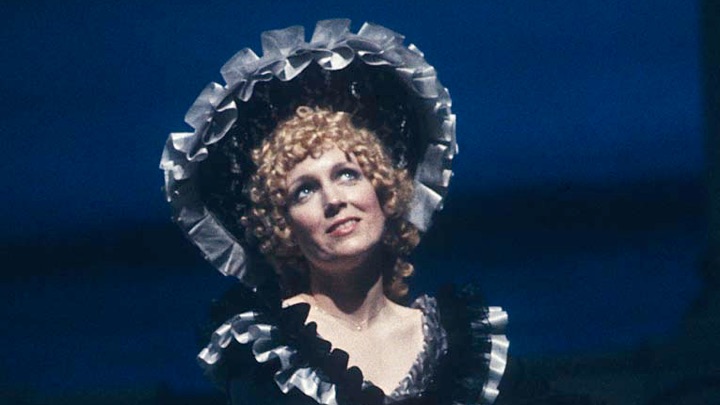 Although Ramey recorded Turco with Montserrat Caballé in 1981, I haven’t found that he sang Selim onstage beyond this Rossini Festival run. Cuberli performed Fiorilla at least once more—conducted by Alberto Zedda in Madrid in 1990, the year of her Met debut in the title role of Semiramide alongside Ramey.

Corbelli, just 30 at the time of this Turco, remains much in demand for buffo roles today. I enjoyed the Italian baritone the first time I heard him as Ford in Falstaff with Lyric Opera of Chicago in 1988. However since he arrived at the Met nine years later as Dandini in the premiere of La Cenerentola, I’ve rarely enjoyed his outrageous mugging and arid, aspirated singing.

Cecilia Bartoli, his first Met Angelina, finally makes her official debut at the Vienna Staatsoper later this month in a semi-staged Cenerentola. While Bartoli sang Despina with the company in 1994, Così fan Tutte was performed at the Theater and der Wien. A week later, Turco starring Bartoli returns to the Staatsoper for the first time since 1962 when the visiting company from Stuttgart performed it led by Wagnerian specialist Ferdinand Leitner with Ruth-Margaret Pütz and Fritz Wunderlich.

The Turco production which premiered in Monte Carlo in January was the first of two Rossini operas that Bartoli has in 2022 returned to after many years, the other—Il Barbiere di Siviglia in a production directed by Rolando Villazon—was the centerpiece of the Salzburg Pfingsten Festival. Her Rosina will be repeated at the summer festival in August—with Corbelli as Bartolo and Ildebrando D’Arcangelo as Basilio.

D’Arcangelo will be Bartoli’s Vienna Selim, because the originally scheduled Ildar Abrazakov has withdrawn from yet another European engagement. The Italian bass-baritone had previously performed Selim with Bartoli at Covent Garden in 2005 when her Narciso was Barry Banks with Corbelli promoted to Don Geronio from Prosdocimo. Banks, who performed Turco as far back as 1995, will also be making his Staatsoper debut on July 3.

I expect that many may be most familiar with Turco via the EMI recording with Maria Callas. I understand that sometime in the early 2000s a previously unknown early live clip of Callas in Turco turned up.

It’s fascinating that Fiorilla has been embraced by sopranos as diverse as Callas and Caballé to Graziella Sciutti and Sumi Jo (who recorded the role for Philips) to Aleksandra Kurzak and Patrizia Ciofi. Its current advocates include Rosa Feola who had a huge success recently at La Scala and Lisette Oropesa who performed it in Dusseldorf early in her career and was scheduled to return to Turco in Munich in 2022. She pulled out of that German engagement, but Madrid’s Teatro Real promises Oropesa as Fiorilla in June 2023 among an enticing cast.

Turco can be downloaded by clicking on the icon of a cloud with an arrow pointing downward on the audio player above and the resulting mp3 file will appear in your download directory.