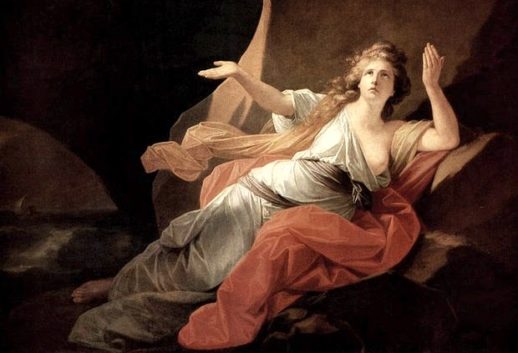 “Trove Thursday” began in September 2015 with Berlioz’s Les Troyens, so to mark its fourth anniversary (and 190th installment) it returns to another setting of that tragic tale: Purcell’s remarkably concise Dido and Aeneas in a pair of fascinatingly different interpretations led by two “Nicks.”

Troyanos and Vickers also performed Berlioz’s Didon and ?née but never together; I believe their only joint engagement besides this Dido was as Kundry and Parsifal at Chicago Lyric in 1986.

Troyanos’s Dido was the centerpiece of my first acquaintance with Purcell’s opera via her 1967 recording under Charles Mackerras. It was also one of the first to make use of some period-performance practices and it’s a lovely account with Sheila Armstrong and Barry McDaniel as Troyanos’s sister and paramour. I do prefer the intimate Mackerras version to her grander, later recording with Raymond Leppard.

The other half of the Dallas Opera double-bill with Dido, by the way, was Pagliacci with Vickers, Raina Kabaivanska and Silvano Carroli.

Rescigno’s ferocious prime mischief-maker is the undervalued Joan Caplan whose versatility can be heard in a “Trove Thursday” presentation of Hasse’s L’Olimpiade. One should note that the Harnoncourt performance features a baritone as the Sorceress, usually but not always sung by a mezzo soprano.

However, Trevor Pinnock’s CD with Anne-Sofie von Otter uses a tenor Sorceress, while the best feature of William Christie’s first Dido is the uniquely pungent countertenor Dominique Visse as the scary architect of Dido’s fate.

Other gender-bending isn’t unknown to Purcell’s Dido. In Mark Morris’s celebrated staging, he danced both Dido and the Sorceress, while a mezzo performed both roles from the pit.

parterre box’s own Judith Malafronte sang Dido and the Sorceress at the Morris’s US premiere in 1990 at the Brooklyn Academy of Music. When it was revived recently, two dancers took over for Morris—a woman as Dido, a man as the Sorceress.

And deciding it’s too great a piece to resist, countertenor Andreas Scholl not long ago recorded Dido’s great lament “When I am laid in earth.”

Each version of Dido can be downloaded by clicking on the icon of a square with an arrow pointing downward on the audio player above and the resulting mp3 file will appear in your download directory.