Welcome to all the pleasures 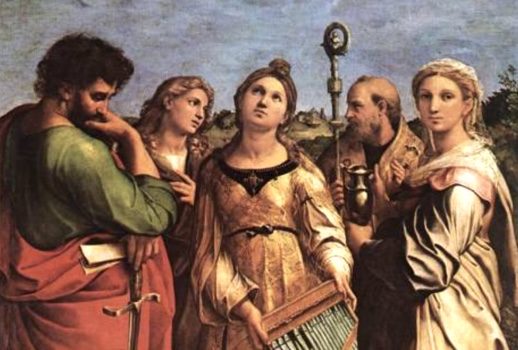 “Trove Thursday” marks St. Cecilia’s Day with two works by Henry Purcell, the composer who often celebrated music’s patron saint: his first of the four odes dedicated to her, the sublime Welcome to all the Pleasures conducted by Gustav Leonhardt and the more often-performed Hail, Bright Cecilia! led by Philippe Herreweghe.

Everyone knows Dido and Aeneas which will be performed in February by Juilliard 415, but much of Purcell’s wealth of glorious vocal music is rarely performed or recorded.

Many of his greatest airs are scattered among the fourteen odes and nine welcome songs, works that are sometimes exquisitely intimate, others grandly expansive.

All 23 plus the Yorkshire Feast Song were collected in an essential if uneven 8-CD set conducted by Robert King on Hyperion. One’s tolerance for James Bowman may determine one’s appreciation for that box but I happen to think his weird countertenor is rather well suited to Purcell.

One gets a nice dollop of Purcell (sung by a soprano rather the expected countertenor—Purcell was himself a countertenor) in the dazzling new Yorgos Lanthimos film The Favourite that opens in theaters tomorrow. Lanthimos might be most familiar from his dystopian romp The Lobster but Alps, Dogtooth and Killing of a Sacred Deer are equally fascinating and seductive.

Set in early 18thcentury London, the deliciously mean and surprisingly sapphic Favourite explores the rivalry between Sarah Churchill and Abigail Masham for the personal and political attentions of Queen Anne and features breathtaking performances by Rachel Weisz (my favourite of the three), Emma Stone and Olivia Colman.

The tangled story was very familiar to me as one of my earliest exposures to Purcell’s music came from the first series shown on Masterpiece Theatre back when I was in grade school.

The opening and closing music for the twelve-episode The First Churchills were very un-HIP excerpts from Purcell’s incidental music; back then I particularly relished the bit from Abdelazer.

Included in the high-toned soap was a decidedly more sedate but equally compelling dramatization of The Favourite’s Sarah-Abigail war, and The First Churchills memorably featured a superb Susan Hampshire and Margaret Tyzack (both fresh from The Forsyte Saga)as Mrs. Freeman and Mrs. Morley—Sarah and the Queen’s affectionate “downstairs” nicknames for each other.

Purcell:Welcome to all the Pleasures, Ode to St. Cecilia’s Day 1683
Utrecht
12 January 2006
Broadcast

The program can be downloaded by clicking on the icon of a square with an arrow pointing downward on the audio player and the resulting mp3 file will appear in your download directory.

Nearly 200 separate podcast tracks also remain available from iTunes for free, or via any RSS reader.