With La Scala’s plan to open on December 7 with a new Lucia di Lammermoor thwarted, Trove Thursday sets its Wayback Machine to nearly 50 years ago to present two of the 20th century’s greatest madwomen—Joan Sutherland and Beverly Sills—denounced by Plàcido Domingo and Alfredo Kraus respectively, with the former pair consoled by Kurt Moll's luxurious Raimundo. 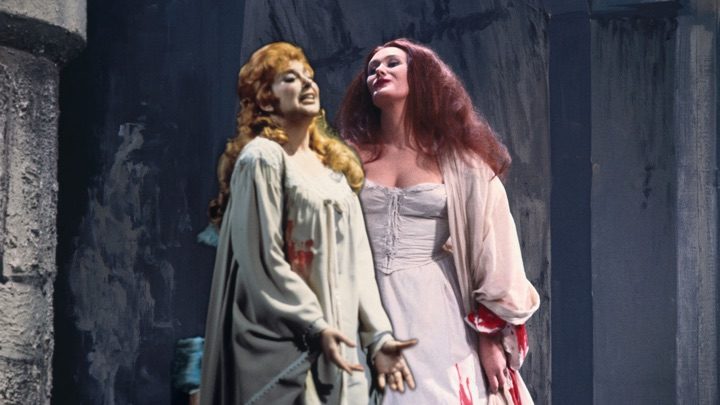 A year and a half after discovering opera via the Texaco-Metropolitan Opera Saturday broadcasts I decided I had to attend one in person. The Dayton Opera was presenting Lucia with Roberta Peters and Barry Morell so my parents got me a $2 student ticket. I went by myself and sat in the very last seat of the front row of Memorial Hall’s balcony. I was 12 years old.

But the year before I’d had two not-so-propitious introductions to Lucia. During that first season of broadcasts I heard Anna Moffo’s disastrous Lucia but hadn’t yet the savvy to recognize either her distress or the fine baritone—Renato Bruson—making his company debut that unfortunate afternoon. I just thought I didn’t get the opera.

A couple months later, The Wild, Wild West, one of my favorite television shows, presented a lousy episode called “The Night of the Diva” during its final season. A Phantom of the Opera knock-off, it featured Patrice Munsel as Rosa Montebello, an Italian soprano newly arrived in New Orleans to perform Lucia. Nearly 20 years after her final Met Lucia, Munsel in high camp mode ticked off a checklist of tempestuous prima donna clichés in the first 90 seconds and later enacted a few minutes of the Mad Scene.

Prior to Lucia I had been to Memorial Hall many times for the Kenley Players and school trips to hear the Dayton Philharmonic. I’d probably seen Peters on Ed Sullivan or one of the talk shows she frequented but I hadn’t yet grown to dislike her. What I most remember from my first night at the opera was catching sight from my far left-hand perch of Morell cooling his heels offstage waiting to burst into the wedding scene. My next Lucia thirteen years later was again at Memorial Hall and featured Mariella Devia, a Met diva more to my liking.

Sutherland appeared in two new productions in Hamburg; first Giulio Cesare in 1969 with Huguette Tourangeau and Lucia Popp followed by Lucia in which Domingo shared Edgardo with Gianni Raimondi. A year before Hamburg, Sutherland and Domingo (in the role of his American debut with the Fort Worth Opera at Lily Pons’s farewell) had done a pair of Lucias during the Met’s June Festival, hard on the heels of Sutherland’s run of 18 Normas over the previous three months!

Later in 1970 Domingo hopped once on the merry-go-round of Alfredos who fell for Sutherland’s Violetta that fall: the others (in order) Giacomo Aragall, Luciano Pavarotti, Carlo Bergonzi, and Kraus! After the new Les Contes d’Hoffmann in fall 1973, Sutherland and Domingo never performed together again at the Met nor probably anywhere else.

Sills and Kraus also did Donizetti at the Met—her final appearances there in Don Pasquale—but not in Lucia. As the doomed Scottish lovers, they got as close as Philadelphia two years before the Buenos Aires broadcast featured today. Kraus would, of course, be Sutherland’s Edgardo in her final Met Lucias. Sills and Domingo never performed Lucia but often sang together in Hoffmann, Manon, and Roberto Devereux, plus a single Il Tabarro at City Opera and one Traviata at the Hollywood Bowl!

In addition to Tom Krause who also appeared in the Sutherland Hamburg Cesare and the always impressive Moll, Sutherland’s Alisa is Vera Soukupova, probably best known for her Erda in the Karl Böhm 1966 Bayreuth Ring, its recording later issued by Philips.

Each Lucia can be downloaded by clicking on the icon of a square with an arrow pointing downward on the audio player above and the resulting mp3 file will appear in your download directory.

In addition, nearly 400 other podcast tracks are always available from Apple Podcasts for free or via any RSS reader. The archive which lists every Trove Thursday offering since the beginning in alphabetical order by composer was updated in September.