Fairies at the bottom of our Wagner

Ordinarily we’d be listening to Bayreuth Festival broadcasts this week but instead Trove Thursday steps up with a true Wagner rarity: Die Feen from the Wiener Staatsoper starring as Ada, the fairy in love with a mortal, Gundula Janowitz, who turns 83 on Sunday. 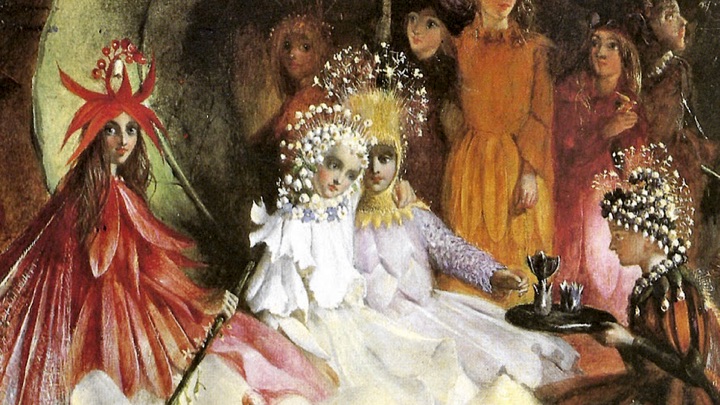 A scan of Janowitz’s 30-year career on the Staatsoper’s archives reveals that during the 1980s the soprano took on several intriguing new roles as well as returned to a surprising few from her past. Today’s Wagner was a one-time-only concert performance, but she also debuted Clytamnestre in Gluck’s Iphigénie en Aulide and Isabella in Krenek’s Karl V on stage in new productions.

She sang six performances of Sieglinde, a role she hadn’t touched since performing it in Salzburg and the Met nearly 20 years earlier in the controversial Herbert von Karajan production. The most surprising “return” of the 80s was as the Erste Dame in Die Zauberflöte which she first performed there in 1960, but then Vienna has always been known for casting top sopranos in the role. By the way, her third role in the house after Barbarina and Kate Pinkerton was as an unlikely Lola seducing Giuseppe Zampieri’s Turiddu away from Giulietta Simionato’s Santuzza in Cavalleria Rusticana!

Janowitz might be congratulated for avoiding a common retiring diva cliché: although she did perform the Marschallin in Der Rosenkavalier during her final Vienna season 1989-90, her farewell at age 52 was instead as Ariadne, a role in which she made 48 appearances with the company (including three in Washington, DC in 1979). Her most-performed role though, unsurprisingly, was the Countess in Le nozze di Figaro.

This Vienna performance took place during a brief period nearly 40 years ago when Die Feen—which was never performed in Wagner’s lifetime—experienced a bit of a renaissance. In early 1982 New York City Opera opened its season with the composer’s first opera starring Penelope Daner, June Anderson and John Alexander. One report bemoaned the vigorous cuts which reduced the very long fairy tale to just over two hours of music. As today’s Vienna broadcast also lasts around 135 minutes, perhaps the same edition was used.

A slightly longer version conducted by Wolfgang Sawallisch was performed the next year during the summer festival at the Bavarian State Opera. A live recording was released on CD with Anderson and Alexander again and Linda Esther Gray as Ada.

I nearly saw Die Feen whose intricately complex plot contains bits that turn up later in Rusalka and Die Frau ohne Schatten among others. I had a ticket a while back for a staging at the Châtelet in Paris conducted by Marc Minkowski but the trip fell through at the last minute and I missed it. Unfortunately it was neither broadcast or videotaped and so far a pirate recording has not surfaced.

This summer’s Glimmerglass Festival was planning to perform Die Feen in a production by Francesca Zambello; maybe it will be rescheduled for a future season.

Die Feen can be downloaded by clicking on the icon of a square with an arrow pointing downward on the audio player above and the resulting mp3 file will appear in your download directory.

Two works which may have influenced Die Feen are also available on Trove Thursday: Marschner’s Hans Heiling and Weber’s Oberon. Janowitz may also be heard as Eva in Die Meistersinger; Donna Elvira; Marenka in The Bartered Bride and in excerpts from Spontini’s La Vestale (in its original French version).

In addition, over 350 other podcast tracks are always available from Apple Podcasts and iTunes for free, or via any RSS reader. The archive listing every “Trove Thursday” offering since September 2015 in alphabetical order by composer was updated recently.