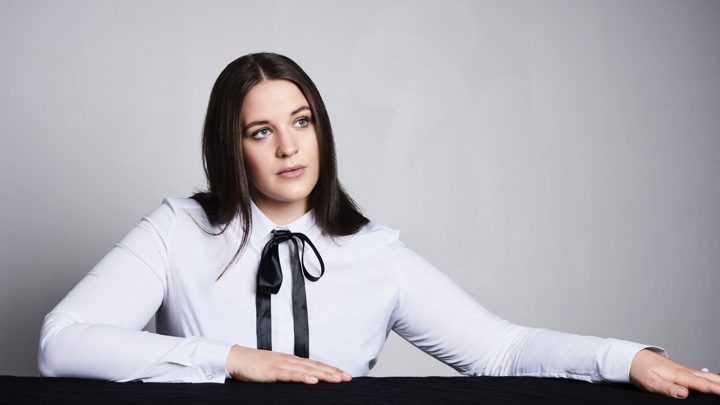 One of the most anticipated debuts at the Met this season occurs at the end of this month when Lise Davidsen appears as Lisa in Pikovaya Dama, so Trove Thursday offers three preview broadcast glimpses of the young Norwegian soprano: a complete performance of Wagner’s second opera Das Liebesverbot; Mahler’s “Urlicht”; and Sibelius’s Luonnotar.

The past few months have been important ones for Davidsen. Her Bayreuth Festival debut as Elisabeth in a new production of Tannhäuser was streamed live worldwide while her first solo CD was released on Decca.

Before arriving in New York for the Tchaikovsky (the Met posted a rehearsal photo so she’s definitely in town), Davidsen recently sang her first Leonore in Fidelio with Orchestre Métropolitain under Yannick Nézet- Séguin.

Davidsen gained international attention by winning the 2015 edition of Operalia, but like anyone thrust into the forefront of an intensely demanding and scrutinized art form, she hasn’t been met solely by unbridled enthusiasm.

For example, in September in a pair of wide-ranging interchanges (one in person, one online), out of nowhere two opera-savvy friends of mine both exclaimed: “I just don’t get that Lise Davidsen…do you?” Seduced by the hype, each had recently listened to her Wagner-Strauss album and come away somewhat puzzled. I had to abstain as I hadn’t (and still haven’t) heard the recording.

In addition, a third friend attended Ariadne auf Naxos two years ago at the Wiener Staatsoper with Davidsen in the title role and later wondered to me what all the fuss was about. Knowing I’d be attending the first night of Pikovaya Dama, I wanted to experience her live without too many preconceived notions. I’ve avoided the CD partly because I just can’t listen to yet another Vier Letzte Lieder, plus the allure of the Wagner bits wasn’t very compelling.

However, putting together these three recent live recordings I’ve experienced some mixed feelings, and I’m hoping some here on parterre box may find these selections interesting, especially the early Wagner opera, a work I like a lot. I was most surprised to come across the Mahler from earlier this year in which Davidsen sings the traditionally mezzo part but she did begin singing in that vocal range.

Though many may have already sampled it, one of Davidsen’s earliest operatic successes was as Cherubini’s Médée (unfortunately in the old-fashioned Italian version) at the Wexford Festival.

After her Met debut, Davidsen stars in a new Fidelio at Covent Garden opposite Jonas Kaufmann and conducted by Antonio Pappano. She later returns to Bayreuth to repeat Elisabeth and participate in the new Ring there as Sieglinde. I’ve heard whispers that there may be Leonores and Ariadnes in her Met future as well.

Needless to say, all ears will be on her the night after Thanksgiving as she gambles on the wrong St. Petersburg man and loses.

Special thanks to La Cieca for assisting with the Liebesverbot recording.

Liebesverbot and the Mahler and Sibelius selections can be downloaded by clicking on the icon of a square with an arrow pointing downward on the audio player above and the resulting mp3 files will appear in your download directory.