Trove Thursday relishes neglected works, operas in translation and irreplaceable divas, and this week it presents a pair that embody all three affections: Cherubini’s Les Abencérages and Weber’s Oberon in Italian with the glorious Anita Cerquetti, conducted by Carlo Maria Giulini and Vittorio Gui respectively. 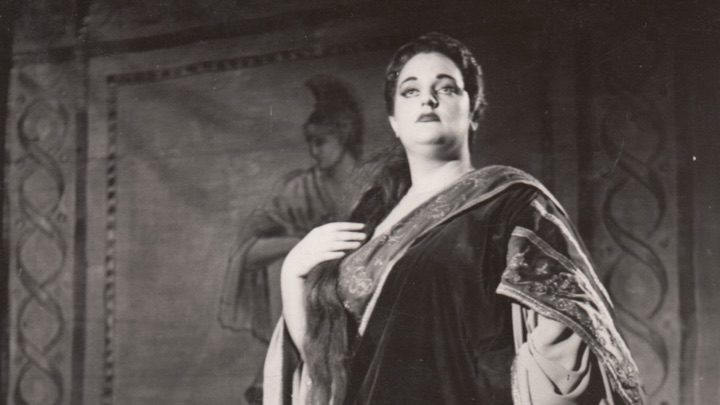 Like the moronic headline announcing the death of Gabriella Tucci this past weekend, Cerquetti’s obituary in The New York Times just six years ago emphasized her slight connection to the inexhaustible legend of Maria Callas. The Italian soprano famously rescued Rome’s 1958 Norma when Callas withdrew after the first act of the premiere.

One might imagine Cerquetti was a relative unknown delivering a “star is born” performance. In fact she was already one of Italy’s most important sopranos and had a few months earlier sung Leonora in La Forza del Destino (a broadcast survives) in Rome alongside Giulietta Simionato and Boris Christoff. That got ignored in service of the Callas mythos. 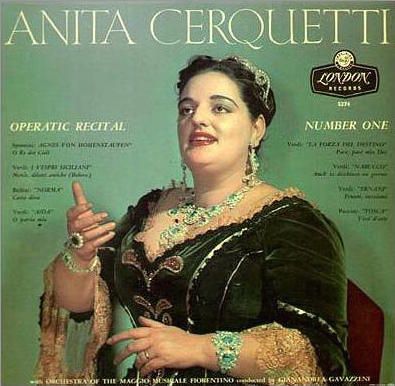 However, a surviving air check of the Rome “rescue” Norma and numerous other broadcasts are primarily responsible for Cerquetti’s near-cultish reputation. From just five years—1954-1958—we have six complete Verdi operas plus today’s remarkable Cherubini and thrilling Weber–has anyone come close to her boldly shining Rezia?

If the “average” opera-lover knows Cerquetti’s voice, it’s likely from either the Decca Gioconda or a 1957 Florence Ernani broadcast magnificently conducted by Dmitri Mitropoulos. The latter has become recognized as one of the quintessential live Verdi documents in which the diva is joined by Mario Del Monaco, Ettore Bastianini and Christoff.

After a political riot during the ovation after “Di quella pira,” relative calm returns and the opera continues. When the Countess Serpieri (Alida Valli in a mesmerizing performance of coruscating intensity) meets Franz Mahler (the charmingly feckless Farley Granger) who will become her all-consuming amour fou, we hear and sometimes see Leonora singing “D’amor sull’ali rosee”: the voice if not the body is Cerquetti’s.

Although Cerquetti never sang at the Met, her North American appearances were surprisingly numerous given she rarely performed outside Italy. She did seven operas in the US and Mexico: Amelia in Un Ballo in Maschera (opposite Jussi Björling and Tito Gobbi) was her American debut in 1955 in Chicago. She returned there two years later for more Ballos and a new Don Carlo conducted by Georg Solti with Simionato, Gobbi and Christoff!

Before heading back to Chicago in 1957 she made her sole NYC appearance and a curious one it was. Italy’s reigning dramatic spinto appeared in the tiny role of Pallade in Gluck’s Paride ed Elena with the American Opera Society: the goddess doesn’t enter until Act V and her music consists of fewer than four minutes! The Gluck was then repeated in Philadelphia which was much luckier than New York in hearing Cerquetti in both Norma and Il Trovatore. Mexico got the latter too as well as Forza and Aïda.

After these brilliantly successful seasons, she disappeared for 1959 returning the following season for Nabucco in Amsterdam and then retired definitively, all before reaching the age of 30!

Unlike many, I don’t keep my copy of Lanfranco Rasponi’s admittedly essential The Last Prima Donnas on my nightstand so I had to hunt for it on my bookshelves to reread his interview with Cerquetti.

After years of avoiding the subject, she offered him varied explanations for her shocking withdrawal; some ring more convincingly than others. One questionable claim suggested that the death of conductor “Mario Rossini” had devastated her. I’ve been unable to locate a conductor by that name but there was Mario Rossi who conducted her in I Vespri Siciliani and Guglielmo Tell. However, Rossi died in 1992, decades after her retirement and the interview.

The unfailingly gracious Rasponi doesn’t follow-up just as he fails to contradict her claim that she always declined to appear at the Verona Arena. He does remark that he heard her there as Abigaille which was also her only role at La Scala.

The furtive diva resurfaced again in the mid-1990s to appear in Love’s Debris, Werner Schroeter’s camp (?) fantasia on Divadienst. Schroeter, like Visconti, is often proclaimed an “operatic” director even when opera is not his subject. However, in addition to Debris, his filmography does include Der Tod der Maria Malibran starring Magdalena Montezuma (aka Einar Hanfstängl) and Candy Darling!

When Debris was released in the US in 1997, it stirred up such passion that it merited two reviews in the same issue of parterre box!

As today’s Trove Thursday highlights Cerquetti singing Italian translations, it seems only right to also include live excerpts from Agnes von Hohenstaufen, Guillaume Tell and Les Vêspres Siciliennes. Her studio version of the Spontini has often been called one of the greatest aria recordings ever made!

Oberon, Les Abencérages and the aria collection can be downloaded by clicking on the icon of a square with an arrow pointing downward on the audio player above and the resulting mp3 files will appear in your download directory.

In addition, over 350 other podcast tracks are always available from Apple Podcasts and iTunes for free, or via any RSS reader. The archive listing every “Trove Thursday” offering since September 2015 in alphabetical order by composer was updated recently.