Trove Thursday offers Shostakovich’s 1962 Katerina Izmailova with Australian soprano Marie Collier as its anti-heroine and Jon Vickers as her lover. 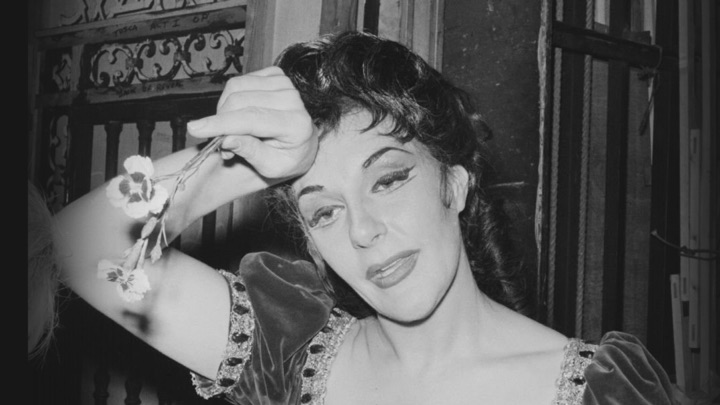 Per yesterday’s big announcement, Lady Macbeth of Mtsensk returns to the Met during the opening week of its 2022-23 season; however, Trove Thursday offers not the original but rather Shostakovich’s 1962 revision Katerina Izmailova with Australian soprano Marie Collier as its anti-heroine and Jon Vickers as her lover.

Despite its initial success Lady Macbeth’s fortunes suffered when Stalin came after Shostakovich and thus the opera was rarely performed after its Leningrad premiere in 1934. Its vivid musical language was famously denounced by a New York critic as “pornophony.”

In the early 1960s, however, the composer revised Lady Macbeth and called it Katerina Izmailova and it had a big success at Covent Garden in 1963 in Edward Downes’s English translation. He also conducted the production which starred Collier. The Downes version was used when San Francisco Opera mounted the US stage premiere a year later, inviting Collier to make her US debut in the title role.

Those familiar with Katerina may know it from the 1966 film version starring Galina Vishnevskaya. Years later she’d record the original for EMI conducted by her husband Mstislav Rostropovich.

Collier’s other role in San Francisco her first season was Marenka in student performances of The Bartered Bride. alternating with Mary Costa who performed the role for adults. Over the next few years, in addition to Musetta, Minnie and Tosca, Collier would also perform Erwartung and in the US stage premiere of The Makropolos Case there.

Her Metropolitan Opera career proved far less lucky after her acclaimed debut as Christine in the world premiere of Mourning Becomes Electra. She was to star in a revival of La fanciulla del West during the 1969-70 season but the company’s prolonged strike derailed that. One Santuzza in the house at the end of that season, followed by more on tour along with a single Tosca, would be it for Collier who died in a fall in late 1971 at the age of 44.

It’s unfortunate most know the soprano from her problematic Chrysothemis in the Birgit Nilsson–Georg Solti recording of Elektra. Her exciting Minnie opposite Franco Corelli (with the San Francisco Opera performing in San Diego) though can be heard here.

Sergei seems to be the only role that Vickers performed in San Francisco that he didn’t also do at the Met. Other rare works he did elsewhere in the US include, of course, Cherubini’s Medea with Eileen Farrell in New York and Philadelphia and Maria Callas in Dallas, Berlioz’s Benvenuto Cellini for Sarah Caldwell in Boston, as well as Dido and Aeneas  and Andrea Chénier, two other Dallas vehicles available on Trove Thursday.

In addition, Vickers’s famed Énée can also be heard here opposite the Cassandre of Josephine Veasey who died Tuesday at age 91. The late English mezzo can also be heard as Pilar Lorengar’s sister in a Solti-led Così fan rutte.

By the way, Chester Ludgin who sings Boris in today’s recording also performed the same role in 1981 when San Francisco mounted Lady Macbeth of Mtsensk in Russian with Anja Silja and Jacque Trussel.

If you haven’t seen it, I recommend the recent English film Lady Macbeth, a very liberal adaptation of the Nikolai Leskov novella. It features a ferocious, star-making performance by Florence Pugh in the title role.

The original Lady M has been in film news lately with the Joel Coen (minus his brother Ethan) Shakespeare adaptation The Tragedy of Macbeth. It’s particularly distinguished by superb black-and-white cinematography and Kathryn Hunter’s spectacularly creepy witch. I thought Denzel Washington started out poorly but gained in stature, while Frances McDormand (whom I usually don’t care for) made a very strong Lady although her sleepwalking scene didn’t work well at all.

And what of the Met’s upcoming Lady Macbeth of Mtsensk? Well, Eva-Maria Westbroek was superb in 2014 paired with Brandon Jovanovich who will also sing Sergei in 2022. But even then her high notes could be a bit dicey, and this revival comes eight years on. Let’s just say I have my doubts.

Katerina can be downloaded by clicking on the icon of a cloud with an arrow pointing downward on the audio player above and the resulting mp3 file will appear in your download directory.

In addition, nearly 500 other podcast tracks are always available from Apple Podcasts for free, or via any RSS reader. The archive which lists all Trove Thursday offerings in alphabetical order by composer will be further up-to-dated soon.