Franco Corelli was born on April 8, 1921 in Ancona and Trove Thursday celebrates the matinee-idol tenor's centenary with a pair of his rare non-Met US appearances; seducing Marie Collier in La Fanciulla del West and vacillating between Ilva Ligabue and Grace Bumbry in Il Trovatore. 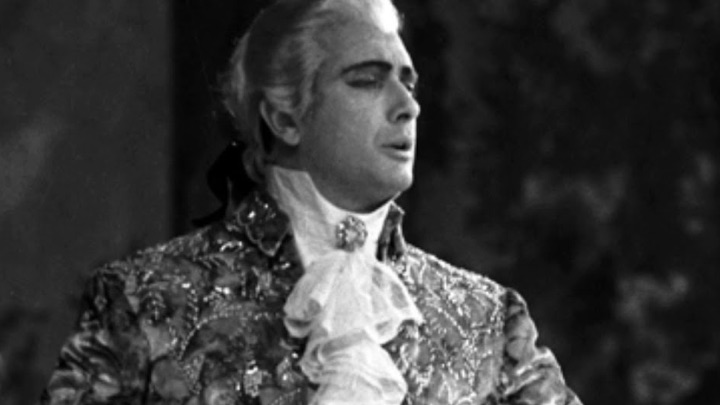 Never having been a rabid, card-carrying Corelli fan, I was surprised to discover how swiftly Metcentric the tenor’s career became after his debut 60 years ago this January. True, he’d often pop over to Philadelphia, but he appeared only five times with the San Francisco Opera, and only once at the War Memorial Opera House—in a Tosca with Dorothy Kirsten.

His other outings during November 1965 were three in Los Angeles and this single San Diego Fanciulla. The year before, he had made his Chicago Lyric debut in today’s Opening Night Trovatore followed by Carmen (again with Bumbry), then La Bohème the next fall opposite Mirella Freni immediately after her Met debut. Then that’s it for both companies.

But the US public beyond the East Coast wasn’t denied Corelli as he headlined the Met’s spring tours for a startling 12 of his 15 seasons with the company! These then make up a substantial portion of his 369 Met appearances.

Where La Scale heard the tenor in rare works like Il Pirata, Poliuto, Les Huguenots (or rather, Gli Ugonotti), La Battaglia di Legnano and Handel’s Giulio Cesare and Hercules, the US only got Corelli in his traditional repertoire—19 roles with the Met.

In addition to many expected iterations of Turandot, Tosca, and Aïda, there were anomalies like three Macduffs in Macbeth during the 1973 tour and just one Edgardo (several days later he dropped out of a second Lucia after the first act!). His Pollione in Norma with Rita Hunter and Frederica von Stade was scheduled for the fall of 1975 but he withdrew after the dress rehearsal and never again appeared with the Met.

In a brief interview included after the conclusion of the Chicago Trovatore Corelli remarks that his favorite role is Don José (because they’re so alike!) but strangely he never did Carmen at either the old or new Met. He did appear however in two 1968 parks performances opposite Rosalind Elias—in the Bronx and Queens, no less, while Manhattan and Staten Island got Barry Morell! But local Corelli fans surely traipsed to Philadelphia to see his José stab Marilyn Horne in 1962, then Regina Resnik in 1971. The latter proved to be his final appearance in that city.

Further puzzles arise around Corelli’s choices. Why after 1964 did he break with La Scala, a company for whom he opened eight of the 11 seasons he appeared there, beginning with his debut in 1954 opposite Maria Callas in La Vestale? What delayed his Met debut until he was nearly 40?

In addition to the intense curiosity about his tackling Otello, why did he never take on Des Grieux in Manon Lescaut, a role so obviously suited to him–particularly after his white-hot duet with Renata Tebaldi at the gala that closed the old Met?

Corelli was still a force when I began to listen to the Saturday afternoon Met broadcasts, but I wasn’t much of fan back then. His sobbing and peculiar lisp bothered me as well as his awful French diction in Roméo et Juliette and Werther. Later I came across several earlier live performances–particularly a spectacular Met Ernani broadcast with Leontyne Price—that made me more of a believer.

A few warnings about these recordings: the primitive-sounding in-house Fanciulla isn’t the easiest listening experience but it captures Corelli’s Dick Johnson opposite the intense Minnie of San Francisco Opera favorite, ill-fated Australian soprano Marie Collier (which whom he also appeared in a single Bohème at the Met where she was due to repeat Fanciulla, an engagement canceled by the 1969 strike).

The Trovatore broadcast is an example of that maddening species where the announcer occasionally speaks over the music—ugh! But it’s worth putting up with to catch one of Corelli’s final US Manricos mothered by a fiery Bumbry who was 16 years younger than her son!

When Herbert von Karajan brought Corelli and his legendary Salzburg Festival Trovatore in which the tenor appeared with Price, Giulietta Simionato and Ettore Bastianini to the Vienna Staatsoper in 1963, their Leonora was Ligabue. The Italian soprano, perhaps best known for her Alice Ford in Falstaff, performed a number of roles in Chicago and Dallas but just once in New York: Donizetti’s Maria di Rohan in New York with the American Opera Society.

The Corelli Fanciulla and Trovatore can be downloaded by clicking on the icon of a square with an arrow pointing downward on the audio player above and the resulting mp3 files will appear in your download directory.

Ligabue can also be heard in another Corelli specialty—Giordano’s Andrea Chènier— but she marches to the guillotine instead with Jon Vickers.