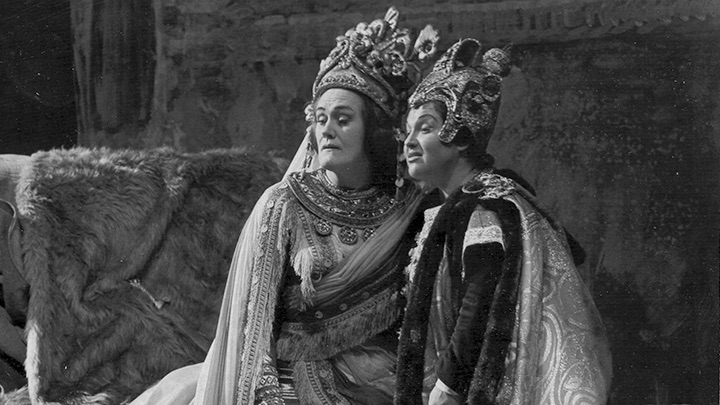 The American Opera Society played a crucial role in creating the legend by bringing them together for the very first time in Bellini’s Beatrice di Tenda and then following up three years later with their only NYC performances of Rossini’s Semiramide: today Trove Thursday presents recordings of both of those exciting and historic evenings!

“Sutherland & Horne” probably means Norma to many; they first appeared in their second Bellini opera in 1963 with the Vancouver Opera, followed by the London/Decca recording, then by a reunion at Covent Garden four years later. Nine long years after Beatrice Horne would finally debut at the Met for whom the pair performed Norma and Adalgisa together a remarkable 25 times over ten months in the house and on tour. Sutherland would also sing two Met performances with Fiorenza Cossotto; they can be heard together in a Teatro Colon Norma available via a previous Trove Thursday post.

After some years apart and beginning in the late 70s Sutherland and Horne would again appear together–in a series of high-profile concerts but only once again in opera onstage: Norma in 1982 for San Francisco. While Horne never sang the vestal virgin with any other soprano, Sutherland would collaborate with Margreta Elkins, Tatiana Troyanos, Huguette Tourangeau and Nova Thomas (and perhaps others?) in addition to Cossotto, but none of those pairings would generate the same frisson as hers with Horne.

But before Norma came AOS’s Beatrice at Town Hall; it was the New York debut for both, and it was also notable for Sutherland’s perseverance despite her mother’s death earlier that day in Australia. So dominating was the fervor around the Australian diva’s appearance that the New York Times review of Beatrice didn’t even mention Horne! It does take Richard Cassilly and Enzo Sordello to task, though. The interest in the Bellini was so great that AOS had to schedule a second performance at Carnegie Hall two weeks later, followed a third in another ten days!

After Beatrice the two divas would record the glorious 2-LP Age of Bel Canto set as well as highlights of Handel’s Giulio Cesare. One wonders then why Decca went to Josephine Veasey instead of Horne when it decided to put out a Beatrice with Sutherland and Luciano Pavarotti.

In early 1964—and beginning with two concerts in Los Angeles—Sutherland and Horne gave the first US performances of Semiramide since the 19th century. Sutherland had, of course, sung the Babylonian queen with Giulietta Simionato at La Scala two years earlier. As I don’t much care for the Italian mezzo’s Rossini, I admit I’ve never heard their Milan broadcast.

A friend who knows her well told me that on her way to her first Arsace in Los Angeles a few weeks before this NYC performance, Horne sobbed uncontrollably to Henry Lewis, convinced she would bomb big-time. This reaction might sound ridiculous given her triumphs in the role over the next few decades, but one should recall the operas she’d been singing in San Francisco the previous several years: Boris Godunov, Fidelio (Marzelline), La Bohème (Musetta), Pagliacci, La Fille du Régiment and Wozzeck! No wonder she was scared about where a dramatic coloratura contralto role might fit after all of those!?

After the AOS Semiramides (there were two, I believe) a Boston staging followed the next year. There was also later a London concert and finally the opening night production of Lyric Opera of Chicago’s 1971 season. The two ladies would continue to perform the opera for years but never again with each other although they occasionally programmed the grand duets in concert.

Sutherland too appeared often with AOS after Beatrice; in addition to future Met vehicles La Sonnambula and I Puritani, she followed Semiramide with Alcina and Haydn’s Orfeo ed Euridice with Nicolai Gedda, the latter is also available on a past Trove Thursday episode.

Beatrice and Semiramide can be downloaded by clicking on the icon of a square with an arrow pointing downward on the audio player above and the resulting mp3 files will appear in your download directory.

The archive, which lists all Trove Thursday offerings in alphabetical order by composer, was recently up-to-dated.