Night of the comet 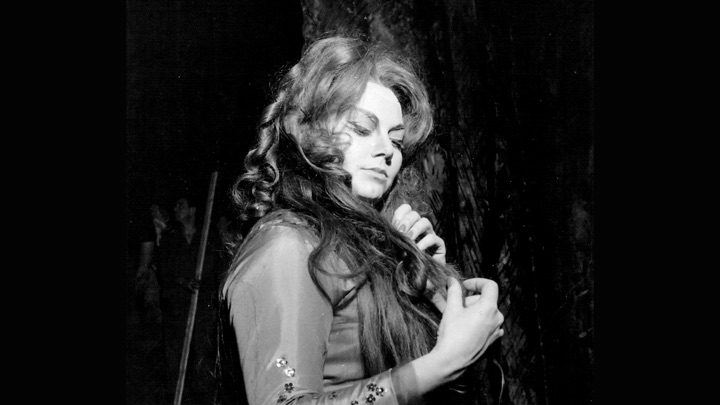 Within a year she was already appearing in leading roles at big houses: a pirate recording memorializes her US debut at Lyric Opera of Chicago in October 1965 as Elena in Mefistofele amid a starry cast that included Renata Tebaldi, Alfredo Kraus and Nicolai Ghiaurov.

By then she had already recorded Nabucco with Tito Gobbi for London; her blazing, remarkably assured Abigaille announced an exciting star whom everyone was eager to engage, and she immediately plunged into a grueling international schedule performing some of the most challenging soprano roles.

Just prior to coming to New York for Bolena, the busy soprano had returned to Lyric for Gioconda; three weeks later, she opened La Scala’s season with Nabucco. That year Souliotis also appeared in Luisa Miller, Un Ballo in Maschera, and Aïda!

I developed a Souliotis-enthusiasm early: when I was eleven years old, all I wanted for Christmas was Royal Family of Opera, a 3-LP sampler put out by London Records that I’d seen at a local department store. My memory was that I had loved every selection but after checking its contents recently I realized that there were only about eight cuts that I listened to over and over. One was the powerful father-daughter Nabucco duet in which Souliotis and Gobbi parry thrillingly.

Following Bolena’s success, Souliotis came back the following fall for Bellini’s Norma which proved to be AOS’s most notorious evening. Her off-kilter “Mira, o Norma” with Nancy Tatum elicited such a raucous audience demonstration that the performance nearly didn’t continue.

The legend goes that Maria Callas (who was in the audience as were Zinka Milanov, Régine Crespin, Licia Albanese and Giovanni Martinelli) went backstage to calm the shaken diva du jour and encourage her to continue. I used to have a copy of the complete performance and to my surprise Souliotis proved rather impressive in the final scene.

Comments on the soprano’s performances increasingly focused on her inadequacies (frequently a refrain of “Too much, too soon!”), though her career continued to flourish—for the time being. She returned in 1968 to Chicago for Norma, debuted in Dallas in Bolena and bravely risked her first US Nabucco again at Carnegie Hall for AOS with Kostas Paskalis as daddy. I’ve seen this performance described as her best preserved live Abigaille.

A Met debut in Macbeth scheduled for the 69-70 season vanished due to the long strike, and AOS went bust in the spring of 1970 After Aïda in Dallas and a Philadelphia Nabucco both in the fall of 1969, Souliotis wouldn’t again appear in the US until 1976 when, with her European career in ruins, she attempted a NYC comeback with a concert of arias with piano at Carnegie paired with Rolf Björling, the late tenor’s son. It was not a success, but loyal Chicago invited her back one last time in 1979 for Fata Morgana in The Love for Three Oranges, her US farewell—at 36!

She’d return to the recording studio again for London/Decca opposite Mirella Freni for Suor Angelica’s Principessa, a role she also performed in Florence with Diana Soviero.

Yet another comeback—in the surprising Mödl-Rolle of the Countess in Pique Dame for Stuttgart in 1999—proved her final stage appearances as she died of heart failure five years later at just 61.

Souliotis, however, was not the only singer for whom today’s AOS Anna Bolena proved noteworthy. A relatively new City Opera recruit, Domingo had made a big splash six months earlier when he opened the New York State Theater as Ginastera’s Don Rodrigo, but he still wasn’t the first choice for Percy. Luciano Pavarotti, who had made a brilliant success that June as Tonio in La Fille du Règiment at Covent Garden, was announced to make his local debut in Bolena, but his first New York appearance had to wait two more years until his Met debut as Rodolfo.

I’ve seen Bolena described as Baker’s NYC debut (it was Cava’s) that that event had actually occurred three days earlier: a Melos Ensemble concert at Hunter College featured Baker in Handel, Chausson and Spohr. Following the Donizetti, her Sol Hurok-arranged Blitzkrieg continued with a concert of Serse and finally an acclaimed Town Hall recital. Her local career, unlike that of Souliotis, would flourish for 22 more years until she bade farewell to Carnegie Hall with Gluck’s Orfeo ed Euridice, a moving evening I was lucky enough to attend.

This Anna Bolena was not the first time American Opera Society had presented the doomed Tudor Queen. Six months after she stole Callas’s king at La Scala, Giulietta Simionato made her eagerly-awaited New York debut as Giovanna Seymour opposite Gloria Davy at Town Hall. Interest was so high that AOS had to schedule a repeat with the same singers the next month at Carnegie Hall

Anna Bolena can be downloaded by clicking on the icon of a square with an arrow pointing downward on the audio player above and the resulting mp3 file will appear in your download directory.

Souliotis in La Gioconda, also from 1966, with Richard Tucker, Rosalind Elias and Cornell MacNeil can be heard here.

In addition, more than 400 other podcast tracks are always available from Apple Podcasts for free or via any RSS reader.