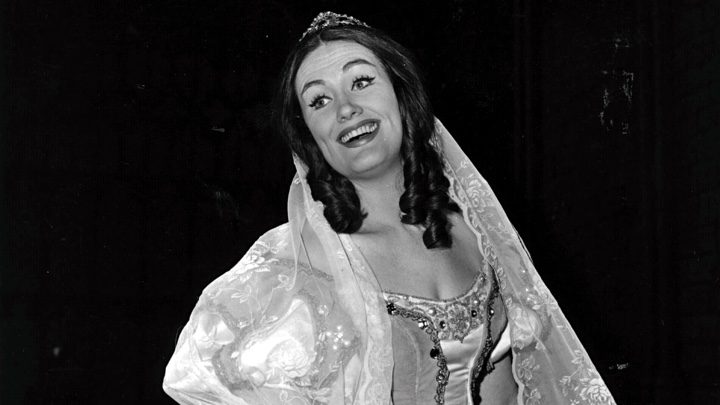 Some may be familiar with this opera and cast from performances they gave in Edinburgh or Vienna but today’s “pirate” is an unusual NYC Carnegie Hall concert of one of the few works Sutherland and Bonynge never recorded for Decca. My guess is that everyone involved believed Gedda was essential and as he was than an EMI artist no recording was planned.

In the mid-1990s Decca finally capitulated to another diva’s wish to record this work when Cecilia Bartoli claimed it and copied Sutherland’s scheme of performing both Euridice and Genio (who gets the dazzling showpiece aria).

The early BBC Haydn selections are fascinating particularly the solo concert aria, a work I’d never run across before. Listening to her effortless “Se ti perdo,” it’s difficult to imagine that Sutherland wasn’t already a star in 1956.

I must also include another Sutherland morsel from earlier in the 18th century. When I was a kid, one of my favorite records was “A Festival of Baroque Opera,” a 2-LP set by Sutherland and Bonynge of highlights from Bononcini’s La Griselda and Graun’s Montezuma. For a concert from around the time those excerpts were recorded, Sutherland performed Eupaforice’s deliriously florid aria from the 1755 Graun opera. It’s a crazy delight with an entirely inauthentic yet amazing cadenza.

Orpheus fever continues: tomorrow in just one theater in both New York and Los Angeles, Céline Sciamma’s hypnotic gay romance Portrait of a Lady on Fire opens for a one-week run. In it, her use of the Orpheus story proves quietly devastating.

I don’t know yet about how Orpheus’s bride might (or might not) figure in, but Karim Aïnouz’s latest film A vida invisível de Eurídice Gusmão plays next week at both Film at Lincoln Center and the Museum of Modern Art.

If neither of these is available, there are always the film masterpieces Marcel Camus’s Orfeu Negro

and Jean Cocteau’s Orphée (his two other Orpheus films I’m less crazy about).

Anima del filosofo and the Haydn and Graun selections can be downloaded by clicking on the icon of a square with an arrow pointing downward on the audio player above and the resulting mp3 files will appear in your download directory.