Drag me to hell 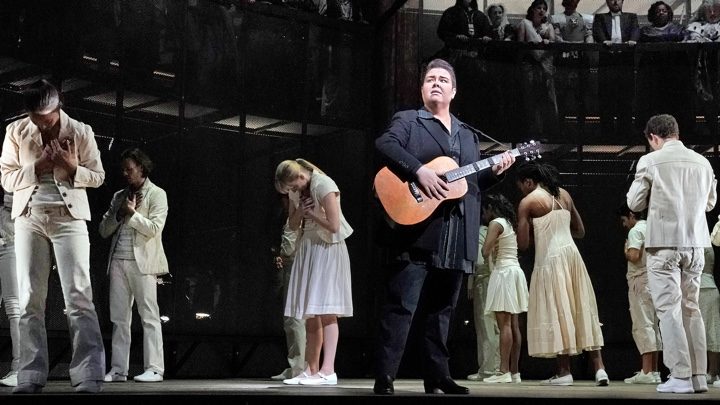 Unfortunately, Hei-Kyung Hong’s arid, self-regarding Euridice suggested Orfeo would have been better off trying bereavement therapy rather than risking life and limb to get her back!

Gluck, one of opera’s greatest and most influential composers, has had a peculiarly spotty history at the Met. While Armide’s premiere featured Olive Fremstad and Enrico Caruso conducted by Arturo Toscanini, the opera disappeared after just seven performances.

Arriving in 1941, Alceste returned once a decade before vanishing too after Eileen Farrell’s debut. Iphigénie en Tauride was revived 12 years ago after an absence of nearly 90 years in an effective production by Stephen Wadsworth but it was always dragged down by the box-office-insurance-inspired miscasting of an effortful, unidiomatic former tenor.

Orfeo, Gluck’s noble account of the legendary musician’s trip to the underworld to reunite with his dead wife, has had a more lasting if erratic presence with the company since premiering during the Met’s second season for a just single performance!

It soon reappeared in the 1890s when it was often incongruously paired with Pagliacci or Cavalleria Rusticana or La Navarraise! In 1909 Toscanini leading Louise Homer and Johanna Gadski restored Orfeo to primacy although the conductor thought it a good idea to discard the overture and interpolate “Divinités du Styx” from Alceste to conclude the first act!

Sunday’s matinee was the opera’s 99th Met performance and Mark Morris’s 2007 contemporary take (originally planned for the late, great Lorraine Hunt Lieberson) which brought the work back after being absent for 35 years is the company’s sixth Orfeo production. By comparison Tosca, with nearly 1,000 iterations under its verismo belt, is also on its sixth Met production!

For the Morris the company—which can sometimes be cavalier about its musicological choices—is to be commended for using Gluck’s original 1762 Vienna version. In the the 250 years since its premiere, Orfeo has bad numerous editors tinker drastically with it, from the composer himself who in 1774 wrought many changes for Paris to Hector Berlioz’s 1859 edition for Pauline Viardot.

The Met’s Orfeo which runs just 90 intermissionless minutes is dramatically concise yet omits two of the opera’s most famous numbers which were added later, the fierce “The Dance of the Furies” (drawn from Gluck’s ballet Don Juan)

and the beloved “Dance of the Blessed Spirits” with its ravishing flute solo.

Yet the 1762 Orfeo’s final scene contains instead a less well-known extended dance suite that many might consider excessive and attenuated yet the infectious dancing by the 22 corps members of Morris’s exuberant choreography made it one of the most satisfying highlights of Sunday’s performance.

Not all of Morris’s contributions proved equally successful. On my fourth viewing of this production the costuming as historical figures of the enormous chorus has only grown only odder as the lighting has grown less distinct: one can scarcely make out who anyone is. Plus the chorus’s gesturing during the first act just distracts from Orfeo’s despair.

Allen Moyer’s colossal, occasionally creaking revolving set severely constricts the playing area for the crucial confrontation between Orfeo and his newly revived wife. Hong’s detached grand-dame posturing stood in such stark contrast with Barton’s simple, heartfelt acting so that their crushing duet failed to make its usual impact. I, for one, thought “good riddance” when the four black-clad dancers carried Hong off once again to death’s embrace.

My understanding is that Hong was a relative latecomer to the cast. Apparently, Sonya Yoncheva was originally contracted to do a double-Manon hat trick, but even before her pregnancy was announced she had dropped out of the Massenet leaving Lisette Oropesa, the original Euridice, to take over. In what can only be interpreted as spectacularly lazy casting, Hong, who made her Met debut almost exactly 35 years ago, was brought in sounding hollow and worn. A friend echoed my own thoughts when he said he could think of at least 25 younger, fresher sopranos who would have been more satisfactory.

To make matters worse, after her unsatisfactory performance Hong’s obnoxiously overeager fans hurled five? six? seven? enormous bouquets on stage during her solo bow for what is essentially a supporting role lasting 15 minutes. They would have been wiser to have tossed them instead to the other South Korean soprano, Hera Hyesang Park who was an absolutely delightful Amore and who surely should have been on that list of 25 finer Euridice candidates.

Barton, singing her first-ever Orfeo and her first-ever trouser role (that must be some of a record for a 38-year-old mezzo soprano!), began roughly sounding forced and small in her low-lying declamatory passages. But once she went to Hell, her singing evolved into Gluckian Heaven! Channeling her inner-Johnny Cash while faux-strumming a guitar, Barton confidently, almost insolently pled and seduced those not-so-fearsome furies.

In Elysium, she compellingly conveyed her awe in a wonderfully rapt “Che puro ciel” and once that pesky nag was back with the dead Barton\s opulently gripping yet infinitely moving “Chè faro senza Euridice” drew tears, as any great Orfeo must. It’s much tougher to do that with the 1762 version which lacks the climactic high notes of Gluck’s revision but Barton’s subtly ornamented rendition proved irresistibly gripping.

Conducting Gluck in a big modern opera house has defeated many but Mark Wigglesworth’s lithe reading had both the gravity needed as well as the pleasing buoyancy the composer’s dance music requires. His orchestra played with spirit and transparency though Dan Sanders’s harpsichord was disconcertingly over-amplified.

The use of an enormous chorus of nearly 100 remains a mistake; despite its members’s best efforts, their massive sound just overwhelmed the music, particularly in Gluck’s serenely pastoral “Ah! se ritorno” in the second act.

Morris, whose eagerly anticipated autobiography Out Loud will be released tomorrow, has throughout his career been an ardent devotee of 17th and 18th century vocal music. While I’ve admired Morris’s opera productions—this Orfeo as well as his first, less successful stab at Orfeo at the Brooklyn Academy of Music in 1996 and his New York City Opera King Arthur and Platée—I remain most enthusiastic about his towering masterpiece L’Allegro, il Penseroso ed il Moderato (Handel) and his riveting Dido and Aeneas, both exclusively dance works.

Although the Yankees were knocked out of the World Series, in less than a month the Met has offered up three marvelous diva home runs: Angel Blue’s wounded, radiant Bess; Anna Pirozzi’s ferocious Lady Macbeth; and now Barton’s anguished yet triumphant Orfeo, a brand-new portrayal sure to only get better as the run continues through November 10.