All I cared about was Bess 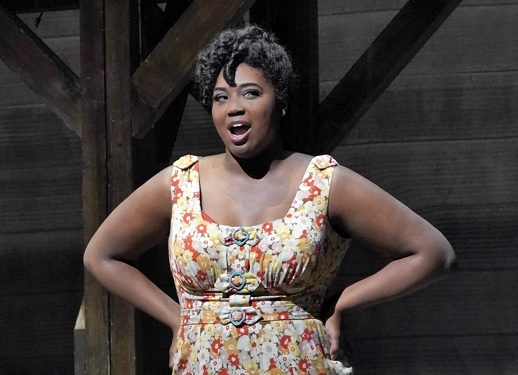 I was sorely tempted to amend the title of the iconic American opera by the Gershwins and the Heywards as Porgy and Bess returned to the Met this evening after nearly three decades in one of the most successful Opening Nights in recent years.

But for most of its nearly three-and-a-half hours all I cared about was Bess thanks to opera’s newest superstar, Angel Blue, in a compleat and enthralling portrayal, gloriously sung and rivetingly acted. I felt slightly guilty at my relief when she headed toward that boat for New York, but at last she’d escaped from Eric Owens’s dramatically inert, vocally barren Porgy.

As its premiere approached, I was torn by conflicting thoughts about how Porgy might play in an America seemingly more than ever riven by the baldest racial hatred. But many are now also constructively concerned with issues of fairness and representation regarding African-Americans. Approaching the Met I was at least relieved to see so many more persons of color than usual in attendance and their joyous excitement was matched by so much infectious enthusiasm on stage that I capitulated to Porgy though my nervous qualms returned during the raucous ovations when the conductor and production team—all of whom were white except for the choreographer—took their bows.

Porgy will perhaps always remain that special case: a musical theater classic that is at home both on Broadway and in the opera house. Perhaps to help it retain its popularity and attract audiences (the Met has programmed no fewer than 16 performances this season with surely many more to come in the years ahead), a good deal of music was omitted although one hardly missed some of it as the first act of 100 minutes was a long sit and the second lacks the “hits” of the first. My occasional restlessness confirmed my memories of the only other time I’d seen Porgy—more than 30 years ago at Radio City Music Hall (!) in the famed Houston Grand Opera production. It’s a long uneven work.

But James Robinson’s fluent and vivid production abetted by Michael Yeargan’s agile revolving unit set helped the time pass pretty painlessly. Despite many memorable individual performers, a number of whom were making their Met debuts, the greatest impression was made by the spectacular special Porgy and Bess chorus who so movingly embodied the inhabitants of Catfish Row, South Carolina. To my surprise more than once during the evening I thought of Peter Grimes. Like the Britten work, Porgy is dominated by its insular close-knit community and eventually that group assumes an importance that surpasses that of its titular characters. 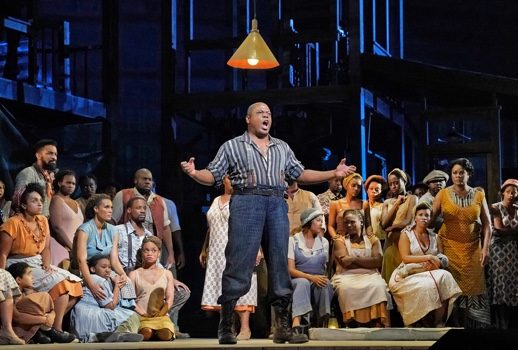 The all-Black chorus’s 60 members made a mighty, impressively nuanced noise and it was no surprise that the roar that greeted it and chorus directors Donald Palumbo and David Moody was the evening’s longest and loudest. But a number of telling cameos also stood out. Debutants James McCorkle as Peter, the Honey Man and Chauncey Packer as both Robbins and the Crab Man proved absolutely arresting while Lindemann Young Artist Leah Hawkins turned the Strawberry Woman’s tiny vignette into a literal show-stopping moment.

The usually surefire opening “Summertime” made less than its usual magic as Golda Schultz revealed some alarming unsteadiness as Clara. This was unfortunately reinforced when Blue repeated “Summertime” in the second act; her radiant and absolutely steady reprise gripped the listener stunningly.

Frederick Ballentine’s clarion Sportin’ Life took a subtle approach to the conniving manipulator and was all the more effective for it. Ryan Speedo Green as Jake, Clara’s husband, and debuting Reginald Smith, Jr. as Jim both made me wish they had been Porgy instead of Owens.

If Blue’s sovereign Bess hadn’t been so immensely impressive, rumors that Latonia Moore’s Serena would steal the evening would likely have come to pass. Her richly expressive, emotionally devastating “My Man’s Gone Now” threatened to tear the roof off the Met. As she convulsed in grief her big bold soprano enveloped the house which collectively held its breath for minutes. That she’s appeared at the Met only seven times in the seven years since her debut seems really unfortunate.

Denyce Graves as Maria, the community’s fierce meddling mother figure, will celebrate the 25th anniversary of her Met debut next year. She was a dominating, domineering presence on stage but I can only compare her vocal state to that of late second-career Astrid Varnay—impressive but very hard to listen to. 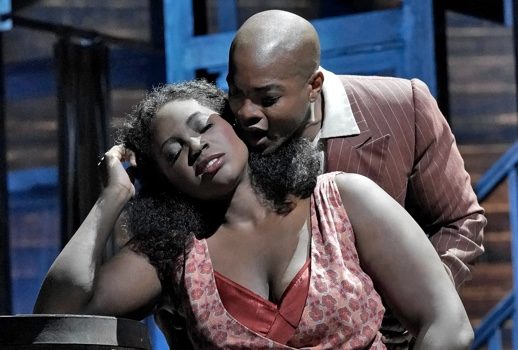 Alfred Walker, fresh from his triumph in Korngold’s Das Wunder der Heliane, returned as another fascinating bad guy, the murdering but seductive Crown. Although one might have wanted his pungently incisive voice to thunder a bit more ferociously, he skillfully conveyed the sensual allure that works so powerfully over Bess. He, too, would have made a more compelling Porgy.

For years now I’ve puzzled over Owens who nearly always disappoints me with uninteresting undersung performances. For some reason, the exceptions have been in Verdi: a grave Requiem with the New York Philharmonic and an introverted Filippo in Don Carlo at the Kennedy Center. But otherwise, I “just don’t get it.”

But last night’s Porgy was truly off-putting; despite some honorable gravitas that explained his character’s standing in the community, he was physically unprepossessing (this murder of Crown was shocking in the wrong way) and vocally tortured. Nearly every note was constricted, even ugly and the light touch needed for “I got plenty of nothin’” was sorely absent.

One aspect that rather worked was the resolute lack of romantic chemistry with Blue’s Bess. His relationship to her was perhaps believable in a paternal sense. However, that paradigm then makes nonsense of the rapturous “Bess, you is my woman now” duet. While Blue soared in her ecstatic phrases, Owens lumbered on. I imagined it was rather like hearing Birgit Nilsson singing Isolde’s “Liebesnacht” at the Met during the late 50s and early 60s saddled with less-than-worthy partners.

Last year’s opening night also featured a pair of star-crossed lovers in their opera’s title and it too featured its leading man cracking in the final pages of the performance—let’s hope that trend ends with Porgy.

But then there was the evening’s Angel who was a revelation even though I much admired her Mimi during her debut season two years ago.

And I can’t remember when I last heard a soprano at the Met with such a vibrant, blooming, free top. I don’t necessarily live for high notes like some but hers Monday night cast an irresistibly addictive “happy dust” spell.

David Robertson drew wonderfully lush playing from the Met orchestra though on occasion one might have hoped for more swing, more excitement. But it was a great improvement over his previous Met new production: his wan, uneasy Così fan Tutte a while back.

As I’m more of an optimist, I could term this a half-full Porgy, not all that it could be one but filled with many wonderful things, most of all its Bess and its full-throated Catfish Row inhabitants.