The aphorisms projected before each act of Das Wunder der Heliane suggested the work concerns the transformative power of love—but does it really? 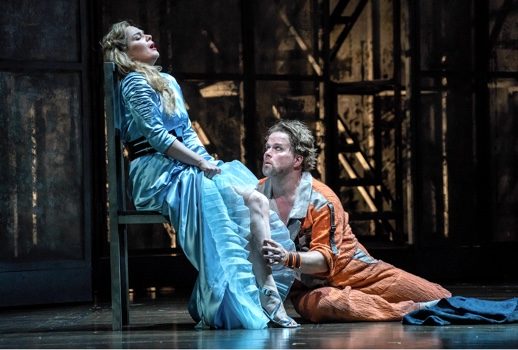 The aphorisms projected before each act of Das Wunder der Heliane suggested the work concerns the transformative power of love—but does it really?

Erich Wolfgang Korngold’s opera had to wait 92 years before Bard Summerscape mounted its US premiere and Sunday afternoon’s performance at the Fisher Center revealed a sometimes head-scratching allegory wrapped in sumptuously soaring music impossible to resist.

“Blessed are they that love” (in both German and English) greets the audience at the Fisher Center and we immediately plunge into a world seemingly without that powerful emotion. Strapped to a gurney, the Stranger is rolled into a dank grey cell. We soon learn that that this New Age foreigner arrived preaching love and forgiveness, concepts so unwelcome in the unnamed kingdom that he’s swiftly sentenced to death.

Heliane, the despotic king’s wife and the only personage with a name, arrives in secret to comfort the condemned man. Immediately bewitched by her goodness and beauty, the previously ascetic Stranger becomes “Salome” to her “Jochanaan,” rapturously praising her hair and feet which she gradually reveals to him.

Eventually his entreaties convince her to strip completely when of course—hey, it’s an opera—her husband arrives to plead with the Stranger to convince his aloof (to him anyway) wife to finally make love to him. In an encounter one might find in a sex farce, the nude Heliane shyly appears prompting the incensed king to order her seized and tried for adultery.

At the trial, the guileless queen admits to being tempted yet denies any physical contact; the Stranger arrives in the courtroom asking to speak with Heliane alone. His outrageous request is granted however and the two passionately kiss, then the Stranger stabs himself.

Heliane’s fate ultimately rests upon her ability to raise him from the dead—she miraculously succeeds in doing only to be stabbed by her stupefied husband. Yet all ends “happily” as Heliane and the Stranger are united in a posthumous apotheosis—all this in just over three hours including two intermissions. Whew!

The chief virtue of Christian Räth’s vivid production was it relates the perplexing parable with economy and clarity although several unnecessary dance episodes distracted rather than illuminated. One important adjustment he makes was that the Stranger’s death is not by suicide: while he and Heliane are embracing, the knife given to her by the king to kill herself is accidentally thrust into his chest during the kiss. 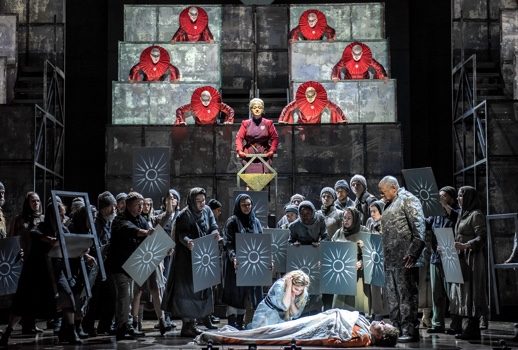 In addition, the final tableau features a brightly-lit Heliane floating dead in a shallow pool of water while the Stranger walks off among his newly liberated disciples—so much for “love conquers all.”

So what exactly does this Expressionistic fable—which perhaps seems more about lust than love–mean? After one viewing, I’m not entirely sure.

“God” is invoked often while both the Stranger and Heliane have overtly messianic tendencies: the Porter (an excellent but occasionally overloud Nicholas Brownlee) relates a story in which Heliane comes to visit his ailing son and her mere presence cures him. But can there be two messiahs—horny for each other?

Perhaps my nontheistic leanings responded most heartily to the human drama contained in Hans Müller-Einigen’s libretto. Heliane’s owning of her burgeoning sensuality was moving. For all his dictatorial ranting, the king’s yearning for love…or at least sex…proved moving particularly as portrayed by Alfred Walker in afternoon’s most splendid and complete performance.

His biting bass-baritone bristled with ferocity as he demanded justice against his (apparently) sinning wife while he simultaneously embodied the aching neediness behind his implacable exterior. A chilling Jennifer Feinstein as his shunned lover, the savage Messenger, becomes the biggest agitator for Heliane’s extermination. Her fierce Ortrud-like outbursts scorched if ultimately without the result her scary character craves.

The common truism that Richard Strauss may have hated tenors would seem to also be the case for Korngold. The punishingly high tessitura for the Stranger was capably if strenuously voiced by Daniel Brenna but without much nuance or ease. While being grateful for his obvious exertions, one couldn’t help wishing for more poetry and variety in his stentorian singing while his awkwardly gauche stage demeanor failed to suggest the Stranger’s powerfully seductive charisma. 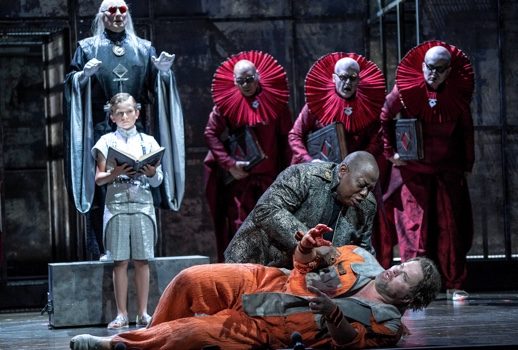 Her striking plastique ably revealed first the queen’s reticence then then her forthrightness, and while she didn’t go fully nude she bravely owned her sheer blue sheath.

Her dark soprano sounded large enough for the demanding writing and the middle was warmly inviting but the top, particularly at forte and above, rang worn and squally though she delivered a striking account of the score’s best-known aria “Ich ging zu ihm.”

Unfortunately it lacked the sophistication of the account by Lotte Lehmann who performed Heliane at the opera’s first performance at the Wiener Staatsoper, a mere three weeks after its 1927 world premiere in Hamburg.

After some screechy moments, a good deal of Stundyte’s soft singing was lovely particularly during the concluding duet, but she couldn’t match the sheen of a Heliane excerpt by Ren?e Fleming, who has made Korngold a bit of a specialty though she’s never sung any of his operas—but should have.

It’s been a long while since I heard New York City Opera doing Korngold’s best-known work Die Tote Stadt but after Sunday’s performance I prefer Heliane despite its mystifying story. Its involving music consistently ravishes the ear, although Leon Botstein’s heavy-handed conducting often failed to fully realize its lush complexities.

The first act started badly with the off-stage female chorus sounding unbalanced and unmagical. The grander, more propulsive writing of the trial scene found Botstein more at home and the sublime third-act prelude made its mark despite the clunky dream-ballet that accompanied it.

There were moments Sunday where I wondered what it must have been like experiencing for the first time the similarly oddball Die Frau ohne Schatten at the Met in 1966. There are echoes in Heliane of both Frau and, in final duet, Ariadne auf Naxos, along with a startling quote from Tristan und Isolde.

As much as I responded to Räth’s strong production I felt that he hadn’t quite found the key to unlock this occasionally impenetrable work, but I can imagine that in the right hands with the world’s best cast and conductor, Heliane could give Frau a real run for its money.

Three more performances of Heliane remain—go, if you can, it’s Wunder-ful. Then Bard’s “Korngold and his World” festival kicks off on August 9 concluding with a concert-staging of Tote Stadt with Allison Oakes, Clay Hilley and Alexander Elliott on the 18th.