I can’t think of an opera this year that I’ve enjoyed as much as Tuesday’s Met Macbeth, thanks especially to the smashing house debut of Italian soprano Anna Pirozzi as its blazing Madame M. 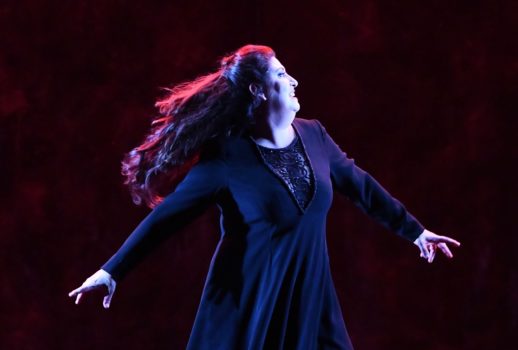 Shakespeare’s Macbeth is famously believed to be cursed to the extent that it’s considered bad luck to refer to it by name so often one hears instead of “the Scottish play.” Sometimes Verdi’s early masterpiece can be seen under a dark star at the Met too.

My first Met Macbeth was to have been in January 1988 when I was in town for Pelléas with Frederica von Stade and José van Dam and Carlos Kleiber’s debut conducting Bohème with Mirella Freni and Luciano Pavarotti. The matinee the day after that extraordinary Puccini was Macbeth but I skipped it because months earlier Eva Marton, Renato Bruson and Giuseppe Sinopoli all had dropped out of the revival. That matinee performance proved to be doubly cursed as an audience member committed suicide by jumping from the balcony during one of the intermissions.

This season’s revival too has been rocked by seismic changes—accused harasser Placido Domingo was unexpectedly bounced by the Met the day before the prima after having sung the dress rehearsal.

Then the second performance featured cover Craig Colclough stepping in late in the day to make his debut in the title role as well as backstage technical difficulties which delayed the opera’s start by more than 20 minutes.

But Tuesday’s third Macbeth of the season went off without a hitch and it had me once again marveling at Verdi’s astonishingly effective score while also reveling in the exciting discovery of a “new” soprano.

Neopolitan Pirozzi is scarcely unknown on the international scene but her first appearance at the Met could hardly have happened with less fanfare. In fact, during the intermission I heard an usher patiently explaining to a disgruntled patron that indeed Pirozzi had always been scheduled so it was her own fault that she wasn’t getting the “other” Anna.

Except for that possible confusion (“Wait, Anna who?”) it would be hard to imagine that anyone was chagrined experiencing Pirozzi’s remarkably confidant one-off Lady which sizzled with stark ambition while offering intriguing intimations of imminent madness.

Admittedly she’s not the riveting stage creature that Anna Netrebko was five years ago at this production’s last revival.

Pirozzi was consistently at her best when she had both her feet planted solidly on the stage floor—not when grandstanding on her bed in a silk negligee nor when precariously sleepwalking on a dangerous pathway of dining chairs. Perhaps the most unfortunate moment came when she and Zeljko Lucic had to unconvincingly fall to the ground for a round of unbridled Sieglinde-Siegmund rutting at the end of Act III. Otherwise this was an involving portrait of a resolved yet unstable woman who would be queen.

Whereas the pairing of Netrebko with Lucic struck me as a potent instance of a sexy second wife eager to make her mark, Pirozzi and Lucic instead resembled a long-married couple—high school sweethearts, perhaps—long used to each other’s strengths and weaknesses.

Their hushed frightened duet after Duncan’s murder revealed two dark, scared souls in sync, and Pirozzi’s Lady seemed genuinely concerned when her husband began freaking out at his hallucinations of the murdered Banquo. She was not, as often indicated, simply ticked off at his making a spectacle of himself at her party.

From the very first moments of her stupendous entrance scena Pirozzi was in commanding form sending out huge fiery high notes that singed the air. Except for dropping out in that last little bit of the cabaletta—as most everyone does—she shirked nothing of Verdi’s demanding writing. The frequent coloratura—while not effortlessly negotiated—was clearly traced and she demonstrated time and again a care for dynamic variation refraining from just bulldozing us over with her powerful voice.

If one occasionally wanted her to push the chest pedal to the floor, one was more than grateful for the refreshing nuance she brought to music that is sometimes more hectored than carefully sung. If her high D-flat at the end of an eerie sleepwalking scene was loud and forceful, the enormous high D-flat at the conclusion of the amazing first-act finale sent chills up my spine. She was justly greeted by long and unusually enthusiastic cheers at her solo bow which appeared to move her greatly.

This was my fourth time seeing Adrian Noble’s eccentric staging and my third hearing Lucic whose Macbeth strikes me as one of his best roles. He doesn’t entirely succeed at pure villainy in parts like Scarpia or Iago but he brings a haunted quality to Macbeth’s hesitations that was ultimately very affecting. Perhaps the indisposition that caused him to cancel on Saturday forced him to sing with greater care and concentration than usual which was all to the good.

If Matthew Polenzani lacked the desired Italianate warmth for Macduff and Ildar Abdrazakov milked his brief moment in the spotlight a bit too aggressively, they ably contributed to an uncommonly unified performance which also featured one of Marco Armiliato’s tauter outings at the podium, helped immensely by the Met’s orchestra and chorus in prime form.

One hopes that Pirozzi’s splendid one-shot debut won’t mean that it’ll four years before we hear her again while the Met scrambles to find a place for her. The soprano’s wide repertoire—her schedule this season alone ranges from Nabucco to Un Ballo in Maschera, from Il Pirata to Turandot—along with her crowd-stirring artistry suggests that she should have a welcome and valued place on the Met’s roster.

I’ve declined to examine Noble’s production because last week Gabrielle eviscerated it with infectious glee. I hope anyone who hasn’t yet read it does so.

I also congratulate La Cieca on Gabrielle’s title which referenced the new Céline Sciamma film that premiered this past weekend at the New York Film Festival. I’ve only heard ecstatic responses to it and I look forward to seeing Portrait of a Lady on Fire soon.

Great and happy, but not quite live