Portrait of a Lady on fire

My blood sure boiled at this revival of the Met's utterly punchable production of Macbeth. 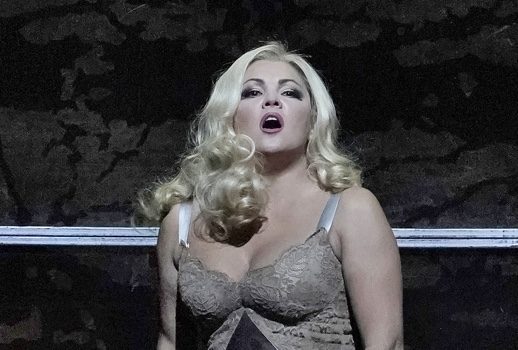 It was by turns laughably absurd (Witches in crew socks doing purse-ography? Talking bubbles?! from Hell?!?!?) and infuriating (Macbeth and Macduff literally bring knives to a gun fight, a swinging light gets in the way of two of the best scenes, including Lady M’s big aria.)

The show was only barely saved by tenor Matthew Polanzani‘s soaring, subtle, sincere Macduff, and Anna Netrebko‘s absolutely bonkers Lady Macbeth. Netrebko’s murderess-by-proxy was half burlesque dancer and half mustache-twirling villain, with one golden drop of somnambulatory siren, thus immediately making her the most fun thing to watch in the whole show, even when I found her singing to be occasionally one-dimensional.

Let me get this out of the way first off: I absolutely hated this Adrian Noble production. No production I’ve seen at the Met since moving to New York in 2017 has made me this furious at the sheer stupidity, obviousness, and hackiness of it. To me, it was so distractingly ridiculous that it took away from the fine work of the singers on stage. Though I’d never seen it before, the production is not new, so, if you don’t care to hear my bitching about it, skip like three paragraphs.

Even the program can’t be sure about when this is supposed to be taking place, only saying “non-specific post-WWII Scotland.” It made no sense, as Scotland was part of the U.K at that point, thus making Macbeth’s rise to the throne after killing Duncan completely absurd, unless this was some kind of alternate history where Scotland didn’t become part of the U.K. and still used clan rules, but somehow WWII was also still a thing.

Also, apparently in this timeline, machine guns exist, but instead of shooting them at each other, armies swordfight with them. And the king of Scotland wears a plastic Burger King crown. This is about the worst thing an updated production can be. It’s set in modern time with no real reason for it or specificity in it, and doesn’t engage with the historical situation in a way that would add richness or use the story to made any kind of point about the modern setting.

Instead the modern setting becomes a confusing distraction, utterly taking me out of the story. I’m somehow supposed to buy that a town in Scotland in the 1940s would have at least fifty witches living near it, including a bunch of little girls, and that the BBC would not have been all over it? Screw this. 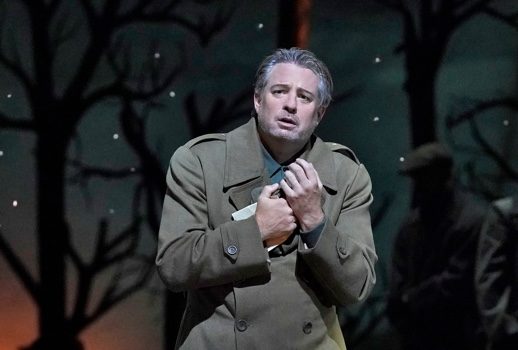 The chorus scenes were abysmal. If they weren’t being silly, they were being boring. The witches, who were all dressed like spinster librarians who gesticulated with their Oxfam brown purses, were completely un-scary. Instead they were merely kooky and comical, thus making Macbeth out to be total idiot for caring at all what they said.

Those scenes would have fit better in a Monty Python sketch, where they would have absolutely killed, but the tonal whiplash didn’t work for me. The other choruses were simply drab and uninspired, including a Les Mis rip off with a giant green flag. I wished for death during every second of them.

The lighting is atrocious, often leaving characters’ faces invisible during chorus scenes, not lighting leads quickly enough while they were singing their arias, and making me nearly burst a blood vessel every time I saw that swinging industrial light.

It was bad enough that from where I was sitting the light completely blocked Macbeth’s face during his first breakdown after Duncan’s murder, but Lady Macbeth turning it out on the audience, as if to imply that this story was supposed to make us reflect on our own ambition made me nearly leave in protest.

The Macbeths have been portrayed as so quick to jump to murder, so unquestionably evil, that this was just utter nonsense. In no way does this production try to make Macbeth or his wife at all relatable, or present what they’re doing as a series of choices that anyone normal would make in the same position. What a cheap trick that totally misunderstands the nature of this story.

I’ll stop now, I promise, but if anyone wants me to go on, please find me in my DMs. 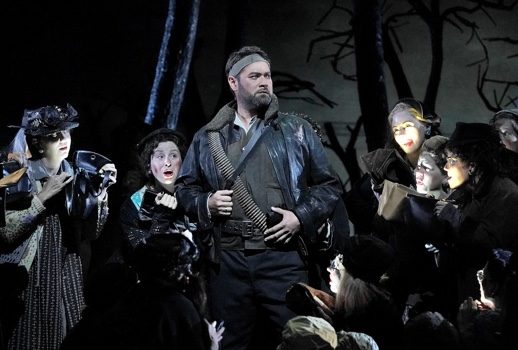 I have a rather ambivalent response with Anna Netrebko’s performance last night, but I blame this more on my severe dislike of basically every blocking choice given to Lady Macbeth, who spent a lot of time slithering about in increasingly satiny nighties, and did a few stripper moves to make sure we got that she was evil and sexy. I

t was overdone, sometimes to great, campy effect (like when she wrapped herself in a sheet, before dropping the sheet and posing: hilarity), and sometimes making Lady Macbeth into a cartoonish harpy, so obviously power thirsty that she’s literally shoving aside servants and her pushing her own husband. We get it, okay. She’s a bad bitch.

This production abandons the idea persuasive, calculating, insidious Lady Macbeth for a caricature of an oversexed trophy wife from hell. Netrebko made the right move by leaning into this, both physically and vocally. In a production this frustrating, lame, and often boring, Netrebko was entertaining for every second she was onstage.

The role is often extremely low (Verdi indicates that a mezzo could sing it as well) for long stretches. I found Netrebko’s chest voice to be forced and often unpleasant, which in this case I basically mean as a compliment. It’s got a certain pinched, nasty quality that is not at all inappropriate for this role.

Lady Macbeth is a singularly unpleasant person, and I think her singing was exactly right for this, even if it lost some of the vocal beauty and grace I expect from her. Personally, I think she was over-singing a bit in the first half, and while she was certainly powerfully villainous, the constant fortississimo delivery grated after a while. Again, however, that may have been the point.

But, look, it’s Anna Netrebko. She’s pretty damn good, and when it was right, it was really right. Her high notes throughout were champagne delicious: sparkling, rounded, head-spinning. The sleepwalking aria was simply wonderful, finally showing off some dynamic contrast and Netrebko’s beautiful sense of line, glorious pianissimos, and sensitive phrasing.

In her final appearance on stage, she was allowed to break out of her scenery chewing to display the sense of guilt and ultimate shred of humanity that lies beneath even this most despicable woman. It was excellent and almost made me feel bad for her.

The other stand-out of the night was Matthew Polenzani’s Macduff, whose “Ah, la paterna mano,” felt like the cool side of the pillow on a stifling night. He’s got a buttery, rich, smooth tenor that never veers into too-nasal, and an incredible way of delivering full voiced high notes with grace and ease, letting the sound pour out like hot caramel.

It’s a generous voice, both in size and in emotional power. Macduff’s grief at the death of his wife and children was beautifully underplayed, with Polenzani staying almost perfectly still for most of the aria, letting his voice do the work. It was mesmerizing stuff, and I wanted to go back and replace every chorus scene with this aria.

Oh, and what about the titular Macbeth himself? In the blessed absence of one singer who shall not be named, Zeljko Lucic’s Macbeth had a rather grey, bland presence, taking a long time to get moving vocally and nearly receding into the background. Again, however, this criticism is actually a compliment in the upside-down world of this production.

I actually liked a reading of Macbeth as rather uncharismatic, someone who can’t charm in way into power, only take it by murderous force. It made his physical interactions with Netrebko, who is much smaller than he is, take on an interesting tone; he appears large, imposing, and physically strong, yet doesn’t have the stomach to kill without remorse, only the stomach to kill. I

t’s the smaller, tougher Lady Macbeth who runs this show, who is prepared to take power, and who grows stronger as Macbeth begins to break down. After his wife’s death, we suddenly see Macbeth for what he is in his final aria, “Pietà, rispetto, amore,”—a deeply frightened man facing eternity as a murderer, hated by all, too greedy to not have killed for power, and yet not psychopathic enough not to be haunted by it.

Lucic truly shone in this aria, the rather dry, asphalty baritone that characterized his earlier sing, yielding to warmth, richness, control, and a tragic beauty that humanized our antihero at the eleventh hour.

Good showings were made by other characters, with Ildar Abdrazakov lending his steely, seductive bass as a muscular, powerful Banquo, and Giuseppe Filianoti embodying a charismatic, convincingly heroic Malcolm, despite that god-awful flag waving. Even tiny parts like Sarah Cambidge’s Lady-in-Waiting were well sung. I only wish this production hadn’t made me want to chug some witches brew to get me through the night.

The conductor was Marco Armiliato.