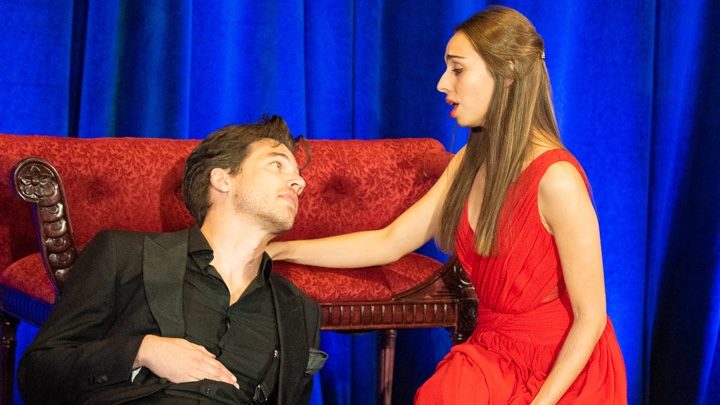 New Yorkers sometimes get lucky when visitors arrive bearing early opera, and over the past week we were blessed by two appealing 17th century presentations: John Blow’s Venus and Adonis from Opera Lafayette which is currently celebrating its 25th anniversary, and La Storia di Orfeo, an intriguing modern pasticcio with Amanda Forsythe and Philippe Jaroussky courtesy of the Boston Early Music Festival.

Venus, Blow’s brief three-act work, is sometimes claimed as the first English opera and it precedes its more celebrated cousin, Purcell’s Dido and Aeneas, by several years. As both run less than an hour, they are often presented together as a double bill, but Opera Lafayette chose to do the Blow on its own.

However, perhaps realizing it would seem a rather small serving, Friday’s concert at the Museo del Barrio began with an inviting selection of songs by Dowland and Purcell spotlighting the evening’s special guests, mezzo Lea Desandre and her frequent collaborator lutenist Thomas Dunford who also served as Venus’s musical director.

Dowland’s well-known “Come again” which opened the program immediately gave notice that Desandre and Dunford are artists whose special partnership demonstrated a rare intimacy. Her arrestingly rich and vibrant voice and forthright yet modest manner proved just right for Blow’s title heroine, a goddess who briefly loves then loses the handsome Adonis.

Tall Douglas Williams was her imposing doomed object of desire; he pleased with his suave manner but his virile bass-baritone had a bit more vibrato than necessary. Sarah Shafer, whose delightful cameo as Iris was a highlight of Opera Philadelphia’s recent unfortunate Semele, again shone as the sparkling Cupid who entrancingly teased and cajoled his mother.

Véronique Filloux, Patrick Kilbride and Jonathan Woody took on some tiny roles as well as doing choral duty when they were joined by promising countertenor Daniel Moody whose sweet “Strike the Viol” from Purcell’s Come ye sons of Art was one jewel of the opening set.

Dunford led the lively band of ten instrumentalists, including Opera Lafayette’s artistic director Ryan Brown on violin; after a bumpy overture they gave a modestly apt reading of Blow’s piquant score which ends with a touching choral mourning lament for the slain Adonis.

Garbed in modern concert dress, the singers and musicians were abetted by two vital dancers in period costumes. One of them, Julia Bengsston, also provided the authentic-looking choreography as well as the spare concert staging which transpired on the righthand side of the stage while the instrumentalists played from the left side.

Desandre, just 26, first came to notice as a member of Jardin des Voix, Les Arts Florissants’s young artist training program, and she and Dunford have collaborated on several recordings with the group Jupiter whose latest CD Vivaldi has been enthusiastically received.

As the English music Desandre sang on Friday was poignant and lyrical, a soupçon of her fiery side with a brilliant shower of Italian coloratura can be heard in an aria from Juditha Triumphans from a recent Radio France appearance.

Way back in 2011, the third piece I submitted to parterre box was a review of the Boston Early Music Festival’s recording of…Venus and Adonis! Since then I’ve written several times about their appearances at the Morgan Library which are often among the best concerts of every season.

This year’s series began with an odd work—La Storia di Orfeo—a concoction promoted by Jaroussky that attempts to tell the story of the legendary musician Orpheus by combining bits from operas by Monteverdi, Rossi and Sartorio but omitting the violent fatal ending.

One version of this modern-day pasticcio was recorded by Jaroussky several years ago, but, as it featured a full instrumental ensemble and a chorus, it wouldn’t have been suitable for touring the US. So, adjustments were made for this month’s performances which conclude in Boston this weekend.

While I have serious doubts about the enterprise itself, Tuesday’s edition at the Morgan displayed marvelous singing and playing by the BEMF Chamber Ensemble led jointly by Paul O’Dette and Stephen Stubbs. Forsythe remains a warmly stylish miracle whose very rare local appearances are always causes for rejoicing. She blended exquisitely with Jaroussky throughout the evening including a predictable encore of the pop-hit final duet from Monteverdi’s L’Incoronazione di Poppea.

But the program’s emphasis expectedly fell on Jaroussky, for nearly 20 years one of the world’s foremost countertenors who appears in the United States only rarely. In his brief program note, he alludes to his hubris in tackling the title role of Monteverdi’s L’Orfeo which was written for a low tenor/high baritone.

But while it was somewhat bizarre to hear his high sweet voice tackling Orfeo’s magnificently ornate plea “Possente spirto,” his fierce agility and dramatic intensity made it work, particularly as the aria’s demanding coloratura often defeats lower-voiced singers.

The conceptual misfire of Storia results from its cobbling together an awkwardly flowing narrative from works that span nearly 70 years. The transitions from, say, Monteverdi of 1607 to Sartorio from 1672 and then to 1647’s Rossi could be downright startling. The inclusion of large bits of Rossi’s Orfeo reminded me of my first encounter with the BEMF: I attended its complete Rossi at Tanglewood in 1997 which was coincidentally the first collaboration of O’Dette and Stubbs.

Although neither was involved with the recording of Storia on Erato both have long been connected to all three of these Orfeo operas. Before the concert I pulled out my CD of Sartorio’s version which was recorded in 1998 and discovered it was conducted by Stubbs and featured them both on archlutes.

Their rejiggering the pasticcio for this tour took some strange turns; for around 80 minutes of music, there were a rather large number of purely instrumental pieces including an extended (and not so interesting) Rosenmüller sonata whose inclusion made little sense.

It would also be very easy to object to the addition of a long duo-aria from Steffani’s 1691 Orlando Generoso, the operatic centerpiece of this year’s festival. It had no connection whatsoever to Orpheus; however, the piece was of such transfixing beauty as ravishingly performed by Forsythe and Jaroussky that any reservations melted away.

By the way. the BEMF Steffani Orlando was broadcast just last Sunday and remains available for listening online. It’s a long haul but highly recommended despite the annoying presence of its determinedly clap-happy audience

Although Forsythe doesn’t appear on the Storia CD, she and Jaroussky got to do another Eurydice and Orpheus in Gluck’s setting on an Erato release which is particularly enlightening as it contains the premiere of a later version Gluck made for Naples which includes a striking additional aria for Euridice.

I’ve always felt 17th century music brings out the best in Jaroussky and his recent CD “Ombra mai fu” dedicated to Cavalli handily supports that contention although there are moments when he sounds uncharacteristically stressed.

Jaroussky also appears on a what looks to be a fascinating brand-new release by Christina Pluhar featuring chunks of Rossi’s Orfeo. I haven’t yet heard this 3-CD set which also stars Véronique Gens and Jakub Józef Orlinski, but I did attend her fine Orfeo-centric Rossi concert here two years ago.

Those curious about Sartorio’s works beyond Orfeo may listen to a Trove Thursday presentation of fine complete performance of his Giulio Cesare starring Alex Penda in the title role..

In March Opera Lafayette heads into the 19th century to leap on the Beethoven-250 bandwagon with Leonore, his early version of Fidelio.