Thus let few thanks be paid 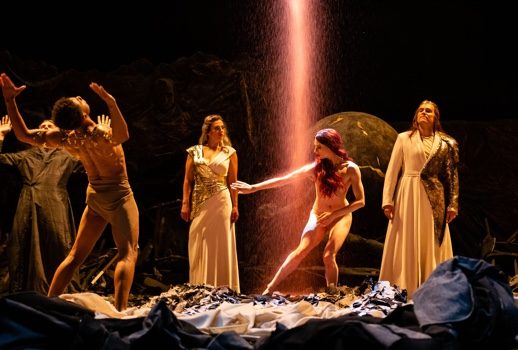 Kudos to Opera Philadelphia for programming Semele—one of Handel’s greatest masterpieces—in its exceptionally interesting and wide-ranging Festival 2019 but unfortunately, despite an extraordinary cast, James Darrah’s drably dull production doomed it.

Despite the printed program’s claims, Semele isn’t an opera at all but a “music drama after the manner of an oratorio” meaning it wasn’t intended to be staged as Handel had given up Italian opera several years earlier. However, his delicious setting of William Congreve’s brilliant libretto depicting the story of an ambitious woman’s ultimately fatal affair with Jupiter (based on Ovid’s Metamorphoses) cries out for the theater. So it’s been embraced, like its twin “sort of oratorio” Hercules, by opera houses now for decades.

In fact we’re informed that Philadelphia’s production which originated at Opera Omaha is Darrah’s third stab at Semele but it proved anything but “the charm.” His six exceptional singers dutifully went through their paces but were ultimately undone by Darrah’s ideas and further hindered by Emily Anne MacDonald and Cameron Jaye Mock’s darkly ugly scenic and lighting design plus Gustavo Ramirez Sansano’s unnecessary and distracting choreography.

It all began promisingly: one was greeted by a nighttime world whose fearful inhabitants crave “lucky omens” from the gods hoping the marriage of Semele to Athamas will earn the blessings of Juno. However, Semele ultimately rejects her preordained and conventional fate and is transported to the realm of the god of gods which unfortunately proved to be a monochrome world of floor-to-ceiling draperies.

The interactions between the sensual nonconforming human and the compulsively philandering deity evolve into one of the most complex and delightful relationships in all Handel but Darrah never leaves them alone. While one desperately yearned to concentrate on the wonderful Amanda Forsythe and Alek Shrader, instead the 20-member chorus and quartet of dancers were always there observing or meddling to no fruitful purpose.

Darrah and Sansano’s most off-putting conceit was to pair the singer portraying Semele’s long-suffering sister Ino (Daniela Mack) with a dancer-mirror, Lindsey Matheis. I can’t imagine what anyone who hadn’t read the program notes ahead of time made of Matheis’s manic cavorting throughout the long anguished interplay between Ino and Athamas which was inexplicably transformed into a pas de trois.

This baffling doubling reached its nadir during Forsythe’s exquisite “Thus let my thanks be paid” during which Matheis repeatedly convulsed. But this was just one of any number of “WTF?!” moments caused by the five dancers who would occasionally carry a singer around the stage upside down or on her side. 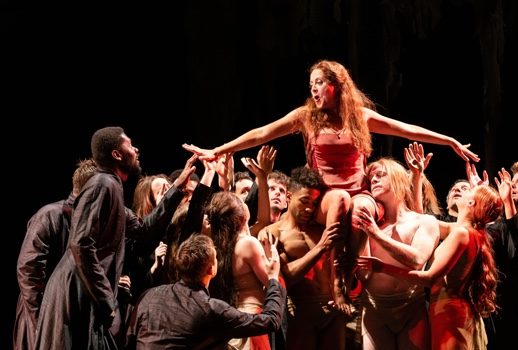 If Semele was a less beguiling work, I might have minded less these follies but Opera Philadelphia had assembled as fine a cast as could be imagined these days. Though directed to play Iris as a speed-demon nitwit, Sarah Shafer’s lithe silvery soprano was still a delight while vigorous and sonorous bass Alex Rosen shone strongly in a pair of widely varied roles, Semele’s stern father Cadmus and Somnus, the drowsy god of sleep.

English countertenor Tim Mead unfortunately got off to a rocky start when someone had the cockamamie idea to move Athamas’s third-act bravura aria to the beginning of the first. His workaday coloratura got him through the piece but it should never have been placed there to begin with. Happily, his later “Your tuneful voice” (though deprived of its da capo) was suffused with soulful longing.

I wonder if Semele’s Jupiter and Juno have ever before been performed by a real-life husband and wife? Although in the score they never appear in the same scene, Darrah’s most provocative and successful idea was to flesh out their fraught relationship particularly during the work’s final scenes which imagined a cowed Jupiter returning to his wife who forgives him and even embraces him for, what, the 10th (or 50th?) time?

In a double-casting that dates back to the work’s Covent Garden premiere in 1744, mezzo Mack performed both Ino and Juno. She was a bit less successful in the former role as Ino’s more lyrically expansive music particularly the long aria “Turn, hopeless lover” revealed a more pronounced vibrato than one generally wants in 18th century music.

Mack came into her own though as a fire-breathing Juno, occasionally pouring out decibels one might expect in Amneris’s Judgment Scene. I doubt she will continue in Handel and lighter Rossini roles for much longer: I could definitely hear in the voice the Carmen and Charlotte in Werther she has already sung while also imagining there will might be a Dalila in her future.

Her husband Alek Shrader made a welcome return to Handel after a Bernstein-filled season of Candide and West Side Story. His shiny tenor has more weight than one might expect for Jupiter and the sound can get muscular on top but his easy agility throughout was very impressive and he spun out a lovely line in the work’s hit tune “Where’er you walk” which oddly ended the first half of the afternoon. 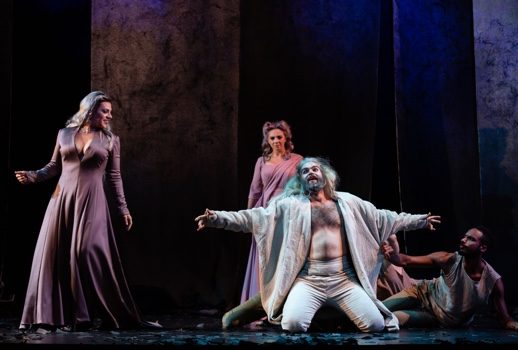 His ornaments there, like many others throughout the show, were a bit odd—he crooned the da capo repeat (seemingly) deliberately behind the beat, but it did serve to introduce the very first hint of eroticism into this Semele, a work I’d always believed was mostly about sex.

Forsythe’s triumph eventually made up for the production’s dumbest misstep: after her ravishing first accompagnato, she launched into a piece that momentarily had me scratching my head: “What the hell is that?!” Gradually it dawned on me someone had interpolated “Oh that I on wings could rise” (but just the A section) from the prison scene in Theodora, composed six years after Semele.

This inanity was immediately followed by the clunky transference of Athamas’s aria; both had me curious who thought he knew better than Handel? Thankfully these were the only egregious musicological missteps perpetrated but why do these things keep happening?

Forsythe’s graceful and limpid “O sleep” contrasted vividly with the no-holds-barred florid showers of “No no! I’ll take no less” but unfortunately her dazzling showstopper “Myself I shall adore” was undermined by a silly sight gag in the projections behind her. Despite all, Forsythe easily ascended to the pantheon of sterling artists I have heard sing Semele live which includes Kathleen Battle and Cecilia Bartoli.

The chorus was enthusiastic rather than well-blended but did sufficient justice to the superb choral numbers that dot the score but the unidiomatic orchestra under Gary Thor Wedow’s sensible and affectionate (rather than incisive and insightful) leadership suffered from persistently sour string playing and imbalances caused by placing the oboes, horns, trumpets and timpani up a level above the slender pit.

All in all Semele did not offer “endless pleasure” but rather an honorable yet ultimately disappointing afternoon. It did make me even more eager to catch Forsythe again when she appears with her frequent collaborator Philippe Jaroussky in La Storia di Orfeo in November at the Morgan Library.

Onward to Agrippina at the Met and Partenope in San Francisco next year.