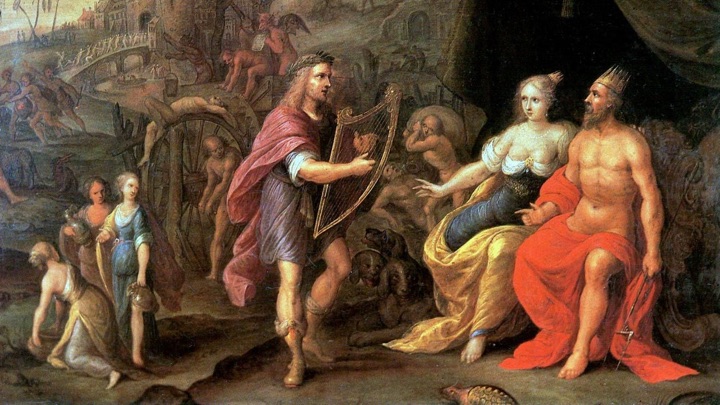 The sad tale of Orpheus and Eurydice has been set by too many composers to name here. Jacopo Peri’s Euridice written around 1600 is considered the oldest surviving opera, with Monteverdi’s setting following just seven years later.

While the American Opera Society had begun presenting L’Incoronazione di Poppea locally in concert in the early 1950s, New York City Opera’s Orfeo began that company’s path to eventually producing all three of Monteverdi’s extant operas. The Met, to date, has presented none of them.

Orfeo was part of Stokowski’s second NYCO engagement. The previous season, he had led a staged double bill of Oedipus Rex and Carmina Burana. The Monteverdi (in its much shortened edition) was paired with Dallapiccola’s Il Prigioniero starring Norman Treigle.

Stokowski would, of course, debut at the Met the following January in the new Cecil Beaton Turandot with Birgit Nilsson and Franco Corelli. After 12 Puccini performances with the company, he would return only to lead a bit of Tannhäuser at the Gala Farewell to the old opera house.

Souzay famously sang just once with the Met: a single performance of the Count in Le Nozze di Figaro in 1965 when his Susanna was Raskin, his NYCO Euridice.

Forty years after Monteverdi’s, Rossi’s Orfeo premiered in Paris, one of the first operas performed in France. The Italian-born Cardinal Mazarin was determined to bring the new art form to the court of Louis XIII and his previous project was Sacrati’s La Finta Pazza in 1645 with the Rossi following two years later. Both works notably featured imported castrati, a phenomenon that didn’t catch on and indigenous French operas that would arise beginning in the early 1670s never included castrated men in their casts.

Rossi, whose music remains far too little known, had written just one opera before Orfeo: 1642’s Il Palazzo Incantato which lay unperformed for centuries before the Argentinian conductor Leonardo Garcia Alarcón fleshed out some missing sections and led its modern stage premiere in Dijon during the pandemic with his group Cappella Mediterranea.

Les Arts Florissants produced the first commercial recording of Orfeo and has also released several disks of Rossi’s sacred works which, now out of print, are very much worth hearing. My favorite Rossi recording, however, is “Le Canterine Romane” by the group Tragicomedia on Teldec which features some of the composer’s entrancing secular works for two or three female voices.

NYC’s early music group TENET has also performed one of those ravishing pieces.

Juilliard Opera returns to action next week at the Peter Sharp Theater with what is being billed as the local stage premiere of Rossi’s L’Orfeo; does this mean that the work has previously been performed locally in concert?

It will feature the school’s student period-instrument ensemble Juilliard 415 and be staged by Mary Birnbaum and conducted by Avi Stein.

Then, on November 23 the Met presents Matthew Aucion’s recent Eurydice set to Sarah Ruhl’s libretto (based on her play) starring Erin Morley, Joshua Hopkins, Jakub Josef Orlinski (in his Met debut) and conducted by Yannick Nézet-Séguin.

Gluck’s opera about the mythological pair exists in several versions and Trove Thursday has posted Orfeo ed Euridice with Janet Baker and Pilar Lorengar, as well as Nicolai Gedda and Jeanette Pilou in Orphée et Eurydice.

Orchestra of the Early Opera Company

Both versions of Orfeo can be downloaded by clicking on the icon of a square with an arrow pointing downward on the audio player above and the resulting mp3 files will appear in your download directory.