Trove Thursday celebrates Christa Ludwig with live excerpts from 1955 through 1982. 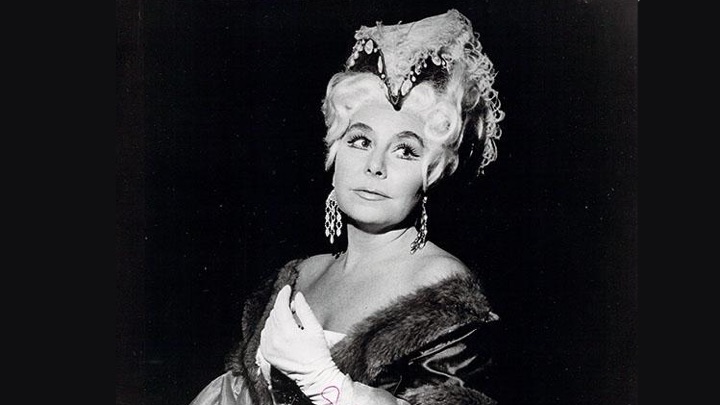 Ludwig was featured on the first opera LP I owned in the small role of the Second Lady in highlights from the Otto Klemperer-conducted Die Zauberflöte. I was astonished this week to discover that the Second Lady was the mezzo’s second-most performed role at the Vienna Staatsoper: 55 performances between 1955 and 1971. Imagine a 1968 Zauberflöte featuring Gundula Janowitz, Ludwig and Hilde Rössel-Majdan as the three Ladies to Arleen Augér’s Queen!

I might add that although I love the opera, I don’t love the widely worshipped Klemperer Fidelio recording starring Ludwig—way too heavy and slow for me, plus she is more exciting in other preserved performances.

In addition to the Elena Souliotis–Tito Gobbi Nabucco duet, another of my obsessions from Royal Family of Opera was Ludwig’s searing Waltraute narration from Götterdämmerung.

But my favorite early Ludwig discovery was Mahler’s Des Knaben Wunderhorn with her then-husband Walter Berry conducted by her frequent collaborator Leonard Bernstein. The initial LP release included two versions, one accompanied by the New York Philharmonic, the other by Bernstein at the piano; I definitely preferred the orchestral, one and it included (unlike a number of Wunderhorn recordings) the haunting “Urlicht” which Ludwig sings divinely.

When I began listening to the Met Saturday broadcasts, Ludwig was frequently featured. After several appearances in 1959 and 1960, Ludwig vanished from the company for six years, returning for the first season at Lincoln Center. She then had a remarkable eight-season run during which she was scheduled for eight new productions, though she eventually withdrew from the August Everding Tristan und Isolde and canceled the opening of the company premiere of Berlioz’s Les Troyens. But after her final local Marschallin in 1974, she’d appear in just two roles over the next fifteen years.

Listening to those broadcasts in Ohio during elementary and high school, I never imagined that I might hear Ludwig in person but years later I did—twice in fact during the 1984-85 season. Having been thrilled by Klaus Tennstedt’s Met debut in Fidelio the previous year, I eagerly traveled to New York for his return with Elektra. Unfortunately, Tennstedt withdrew but the Strauss performance still proved memorable, mostly for Ludwig’s riveting ruin of a Klytämnestra. A few months later I delighted in her sly Quickly which lit up Carnegie Hall in a starry, Georg Solti-led Falstaff that five years ago was posted on Trove Thursday.

Ludwig’s enormous discography made pulling together these excerpts a challenge. The two exceptions to the non-commercially recorded “rule” are arias from her calling-card role of Cherubino (her complete 1956 Le Nozze di Figaro under Karl Böhm has never been released on CD), plus a striking 1968 “Immolation Scene” with the Chicago Symphony Orchestra.

Verdi played an important part of Ludwig’s career but not in the US where she performed only Preziosilla in Chicago and several turns as Amneris at the Met—one in 1960 followed by just two more a decade later. By some extraordinary coincidence Lucine Amara and Cornell MacNeil were the Ethiopian daughter and father in all three!

Previously my only thoughts about Ludwig as Eboli involved her notorious withdrawal after the opening of a new Don Carlo at the 1975 Salzburg Festival. But she had in fact sung the Princess years earlier in Salzburg and it was by far her most often performed Verdi role at the Vienna Staatsoper. She even chased Carlo at La Scala in 1961, alternating with Giulietta Simionato and Oralia Dominguez.

As wide-ranging as Ludwig’s operatic career proved to be, it might have been even more eclectic. A 1973 profile in OPERA magazine mentions a planned Vienna production by her husband Paul-Emile Deiber of Meyerbeer’s Le Prophète that never happened as well as the San Francisco La Favorita with Luciano Pavarotti from which she withdrew.

In that same article, Kostelnicka in Jenufa is listed among her repertoire but as far as I know she unfortunately never performed the Janacek role. My own impossible Ludwig dream would be the title role of Elektra, but at least we have that magnificent Recognition Scene she recorded with Berry.

Videos of Ludwig in opera are not plentiful but one important example is Vaclav Kaslik’s 1969 studio, lip-synced film of Così fan Tutte which preserves her delightful Dorabella in the company of Janowitz (take a look at that hair helmet!), Olivera Miljakovic, Luigi Alva, Hermann Prey and Berry, conducted by Böhm.

If I had a lot more time, I’d have been more specific about the excerpts included. But I will say that one can discover the entire Ariadne prologue, Don Carlo’s Garden Scene plus Eboli’s two arias, the Aïda Judgment Scene, the entire second half of Macbeth’s first act as well as the Sleepwalking Scene (if you don’t know it, her Lady is just smashing!), etc. Sound quality varies considerably with the Orfeo bits the most problematic.

Sifting through so much live Ludwig over the past few days, I was reminded of Robert Lawrence’s eloquence in A Rage for Opera published 50 years ago. My copy seems to have disappeared but I recall he acknowledged that she could be an imperfect singer—intonation suffered not infrequently, for example—but he hailed her fearless, committed artistry which always shone through.

Each group of today’s Ludwig-fest can be downloaded by clicking on the icon of a square an arrow pointing downward on the audio player above and the resulting mp3 files will appear in your download directory.