Tonight at the Met should have welcomed Barrie Kosky’s production of Prokofiev’s The Fiery Angel; in its absence Trove Thursday steps in with a recent broadcast featuring this summer’s breakout star Ausrine Stundyte as the enigmatic Renata. 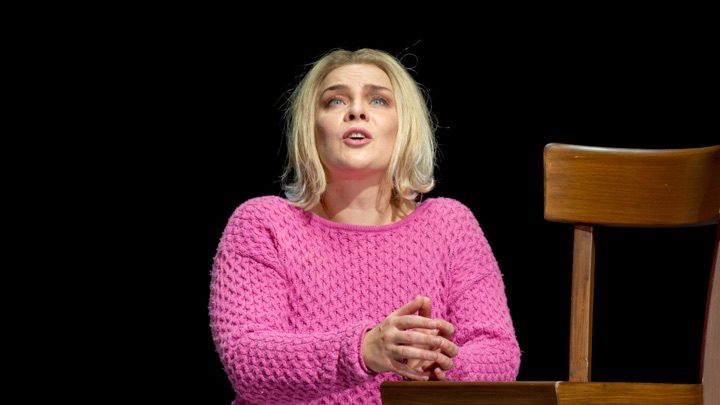 Prokofiev’s operas don’t immediately spring to mind when I think of my favorite 20th century operas but they should. War and Peace is a sprawling epic filled with indelible, moving characters and the loony antics of The Love for Three Oranges constantly surprise and delight, while The Gambler brings Dostoyevsky’s compelling short story of addiction vividly to life. And I’ll never forget the nonstop enchantment I experienced when I attended Betrothal in a Monastery during the 1998 Kirov Opera visit to the Met. The ideal Louisa of exquisite 26-year-old Anna Netrebko only added to the magic of that matinee.

Six years earlier another Met residency by the Kirov brought Fiery Angel to Lincoln Center. As I was leaving a few days later to spend a month on Lake Como—my first-ever visit to Italy—I was distracted during the Angel premiere, and Prokofiev’s probing study of psycho-sexual obsession mostly eluded me. I hadn’t had time to do my homework and MetTitles were still years away. But the searing performances of Galina Gorchakova and Sergei Leiferkus as Renata and Ruprecht nonetheless made an enormous impression.

I had heard the baritone the pervious fall as Tomsky in Pikovaya Dama with the Boston Symphony at Carnegie Hall but it was really Gorchakova about whom everyone was buzzing. Just 30 at the time of the Kirov at the Met performances, she wielded her gleaming, tireless soprano to easily surmount Prokofiev’s fierce demands.

Despite her personal triumph it took her more than two years for her to appear with the Met, and I attended her powerful if unsubtle debut as Cio-Cio-San. Unfortunately, neither of her Russian roles with the company—Tatyana and Lisa—impressed as much as that fierce Renata or her Fevronia in The Legend of the Invisible City of Kitezh which was brought by the Kirov not to the Met but to the Brooklyn Academy of Music a month after her Met Butterfly debut.

Fiery Angel isn’t revived so often probably due to the challenges of the role of Renata. A few important singing actresses have tackled it with some success including Marie Collier, the inevitable Anja Silja and Leyla Gencer opposite Rolando Panerai in a Frank Corsaro staging for the Spoleto Festival. Kosky’s Met protagonist was to have been Svetlana Sozdateleva who had originated his production in Munich. Peter Gelb has said this season’s canceled new productions will be rescheduled—we’ll see. Perhaps by the time the company can find room for it, Netrebko might be convinced to tackle Renata.

But in the past some rather young sopranos have been invited to take on the demanding role. It’s been called a “voice-killer” and pointed to as one of the factors behind Gorchakova’s shortened career. Jane Rhodes was under 30 when she recorded the opera (in French) as was Felicia Weathers who made her Chicago Lyric debut as Renata in 1966; Gencer was just 31 at Spoleto.

On the other hand, Stundyte has been on the international scene for some years standing out as one of today’s most riveting stage creatures. She has been particularly acclaimed in the title role of Shostakovich’s Lady Macbeth of Mtsensk in addition to Renata which she repeated at the Aix-en-Provence Festival in 2018.

I heard Stundyte at the 2019 Bard Summerscape production of Korngold’s Das Wunder der Heliane. I’ve been told that she was in fresher form at the opening two days prior to the performance I attended, but she was a mesmerizing presence if vocally a bit tired.

Her triumph this summer in the new Krzysztof Warlikowski Elektra at the Salzburg Festival brought her to a new level of international attention performing with her fellow—also much buzzed-about—Lithuanian soprano, Asmik Grigorian.

Who knows what the future holds, but for the moment, Stundyte is scheduled to reprise Fiery Angel at the Theater an der Wien opposite Bo Skovhus in March.

Fiery Angel can be downloaded by clicking on the icon of a square with an arrow pointing downward on the audio player above and the resulting mp3 file will appear in your download directory.

An exciting War and Peace broadcast from the Bolshoi starring Galina Vishnevskaya can be listened to or downloaded here.

The archive, which lists every Trove Thursday offering since the beginning in alphabetical order by composer,  was updated in September.