The future’s so bright

For this, the 250th edition of Trove Thursday, [hold for applause] a broadcast of a memorable evening at Carnegie Hall—and I was there: Smetana’s stirring Libuse, the Czech national opera, with a transcendent Gabriela Benackova as its titular prophetess. 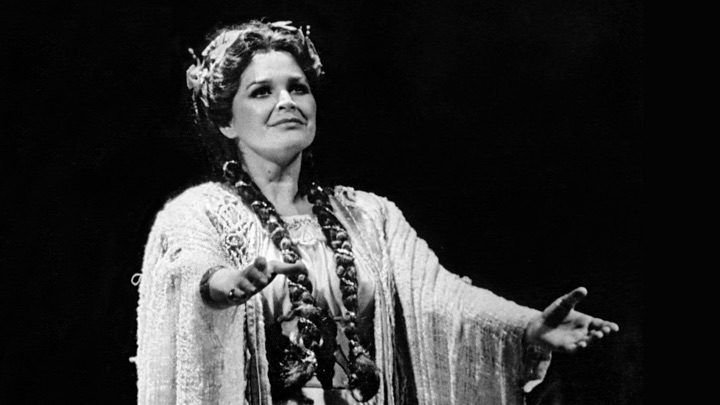 Diva-stalking is not something I’ve done very often but for three consecutive years during the 1980s, I was sure to be in New York City to hear Benackova perform Czech opera. When she made her US debut with Opera Orchestra of New York in 1979 as Kat’a Kabanova, I hadn’t yet begun opera-shuttling between Ohio and the East Coast, but when it was announced that the soprano would finally be returning to the US for Libuse, I was ready, particularly as airfares at the time were ridiculously cheap.

I even subscribed to OONY that season as I was also eager to hear Aprile Millo and Carlo Bergonzi in I Lombardi as well as Ghena Dimitrova and Piero Cappuccilli—only his third NYC appearance—in La Gioconda. Eve Queler’s group also threw Dimitrova and Cappuccilli together for an under-rehearsed but still exciting all-Verdi concert two nights after Gioconda, but I was most of all looking forward to finally experiencing Benackova live.

I had already bought several of her broadcasts on reel-to-reel tapes, and by that time I was also indulging in my new addiction of buying too many CDs. I had snapped up her complete Rusalka (bought on sale at Record Hunter on Fifth Avenue) and two aria recitals, but neither medium prepared me for the seemingly effortless, soaring splendor of her glorious voice in person.

Apparently Benackova believed the role of Libuse to be essentially too heavy for her but as the reigning Czech soprano she agreed to perform the opera just twice—once for the reopening of the Narodni Divadlo in Prague (a live recording of which was released on CD), followed by today’s performance, the opera’s US premiere. Usually I omit nearly all the post-performance applause in the uploaded mp3 but I couldn’t resist including the enthusiastic cheering after this March 1986 concert, most especially the ecstatic roar that greeted Benackova at her solo bow.

Carol Vaness was originally announced to sing Krasava but bowed out and was replaced by Linda Roark-Strummer whom I would hear three years later as Abigaille in Nabucco with the Philadelphia Orchestra and Riccardo Muti at Avery Fisher Hall. Vaclav Zitek and Pavel Horacek came along with Benackova from Prague and Paul Plishka learned Chrudos to complete his OONY triple-play that season, as he also starred in the Lombardi and Gioconda.

Benackova so won me over that I had to return the following year for Rusalka; in fact, I ended up coming to New York twice for it. I had already bought my plane ticket for its original March 1987 date but late in the game she pulled out of her scheduled Met debut as Micaëla around that same time. So Rusalka was moved to May at Avery Fisher Hall and I dutifully made another trip for what turned out to be the most gorgeous singing I’ve ever heard in my life. Then attending the monumental Jenufa opposite Leonie Rysanek back at Carnegie Hall the next March proved a no-brainer.

Other than this Libuse, which was unsurprisingly the composer’s favorite opera, and The Bartered Bride, the only other Smetana I’ve heard was his first opera The Brandenbergers in Bohemia which I caught during my second trip to Prague. If neither it nor Dvorak’s The Jacobin which I saw the following day revealed a hidden masterpiece, I was grateful to experience them, and I’d love to see The Kiss or The Two Widows, in addition to Smetana’s powerful but unfairly neglected Dalibor.

There are unlikely to be another 250 Trove Thursdays but—for now–onward to 300—if without Gerard Butler, alas.

Libuse can be downloaded by clicking on the icon of a square with an arrow pointing downward on the audio player above and the resulting mp3 file will appear in your download directory.

Other Smetana (both in German) on Trove Thursday: The Bartered Bride with Gundula Janowitz and Waldemar Kmentt and Rafael Kubelik conducting Felicia Weathers and Sandor Konya in Dalibor.