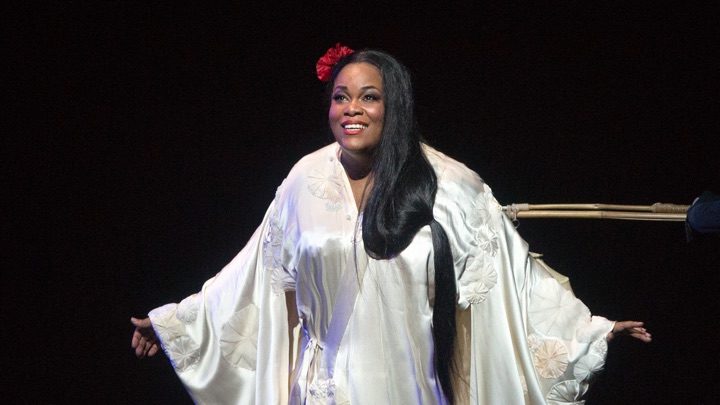 Many artists have posted ad hoc video recitals on YouTube and social media over the past months but few have given me as much pleasure as Moore’s which was streamed live on 30 July sponsored by the Los Angeles Opera. She performs Tatyana’s Letter Scene from Onegin, several Rachmaninoff songs and ends with a spiritual.

It reminded me how little we’ve heard her in New York since she was a Met National Council Auditions finalist (along with Bryan Hymel) 20 years ago!

Two years ago, I posted on Trove Thursday Opera Orchestra of New York’s 2007 L’Arlesiana by Cilea, a performance I attended and the first time I heard Moore. I missed Edgar the following year but often wondered what had happened to her. Likely she was just off my radar until her well-received, last-minute Met debut as Aïda on a Saturday broadcast in 2012. She only reappeared there four years later for a one-off Madama Butterfly following some performances of Tosca with New York City Opera where she ceded the opening to Kristin Sampson.

Her powerful Serena handily stole the reviews for Porgy and Bess last year at the Met even from Angel Blue’s ravishing Bess. Moore was expected to once again repeat Aïda in this season’s canceled new production scheduled to open this week. But surely there might be roles for Moore beyond Aïda and in American operas!

Having two weeks ago posted Aïda with Jessye Norman, I began to think about how frequently Black sopranos are cast in that opera. Although Norman recorded a couple early operas for Philips, I believe Aïda was the only Verdi role she performed, but why Aïda and not Leonora or Amelia or…?

My mind quickly ran through the many African-American sopranos who have sung Aïda over the past decades, including some who were overmatched by the vocal demands of the enslaved Ethiopian princess: Leontyne Price and Martina Arroyo, of course, plus Gloria Davy, Margaret Tynes, Ella Lee, Felicia Weathers, Leona Mitchell, Priscilla Baskerville, Camellia Johnson, Indra Thomas, Wilhelminia Fernandez, Michelle Bradley as well as former Amneris Shirley Verrett. There are surely others that readers could name.

I can’t find any indication that Grace Bumbry performed the title role although she make a fanciful video in which she did the Aïda-Amneris duet all by herself. I’d heard Blue was going to sing her first Aïda in a new production in 2021, but apparently it’s been canceled or postponed.

Giordani had some of his greatest local successes with OONY. He was the Maurizio torn between Aprile Millo and Dolora Zajick in a celebrated Adriana Lecouvreur. His Arnold was a standout in the company’s Guillaume Tell as was his Raoul in Les Huguenots. Although no Meyerbeer fan, I heard him twice sing the great Act IV duet opposite Krassimira Stoyanova’s Valentine, first at the dress rehearsal before the 2001 performance and again at a 2008 anniversary gala: on both occasions they were thrilling.

Edgar can be downloaded by clicking on the icon of a square with an arrow pointing downward on the audio player above and the resulting mp3 file will appear in your download directory.

The archive which lists every Trove Thursday offering since the beginning in alphabetical order by composer was just recently updated.