With one show opening Sunday, another beginning previews on Monday and two more scheduled for the spring, 2021-22 will be yet another Stephen Sondheim-centric season in New York City which leads Trove Thursday to offer three "international" live recordings in which the artist’s works are performed without his inimitable English lyrics. 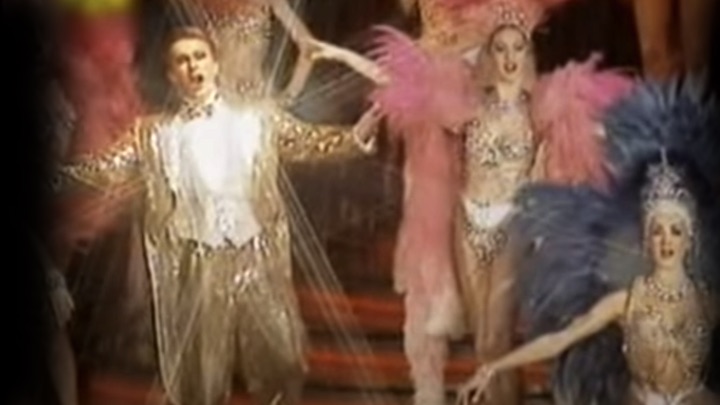 Featured are a complete A Little Night Music in Swedish plus extensive excerpts from a Japanese Pacific Overtures and Follies in German!

I’m not very fond of Assassins but I’m curious about Company and wonder if an all-American crew can make a better showing than the lackluster (to my ears) British cast—with Patti LuPone who repeats in New York–did on the London CD.

In the spring, MasterVoices will bring Anyone Can Whistle back to Carnegie Hall with Vanessa Williams as the Mayoress,, while City Center’s Encores does a two-week run of Into the Woods featuring Sara Bareilles, Christian Borle and Heather Headley as the Witch.

Of today’s three Sondheim-in-translation shows, I attended one in person: the New Theater of Tokyo’s opulent Pacific Overtures which played Avery Fisher Hall during the 2002 Lincoln Center Festival. Despite its excellence I had real reservations. Sondheim’s English lyrics had been so imprinted on my brain from the OBCR that I missed them mightily throughout the evening.

Sondheim’s acclaim as a lyricist rankles as he wishes he was embraced equally for his music. The enduring success of two of the three shows for which he provided only the lyrics—West Side Story and Gypsy—may also help to push his music into second place. By the way, my first live Sondheim show was the third of his lyrics-only projects—Do I Hear a Waltz?—to music by Richard Rodgers. I saw it one summer has a kid when the Kenley Players presented it with Anita Bryant (!) in the lead.

From the Berlin Follies, I’m including just the final “Loveland” sequence in which the solo numbers are juggled from their familiar order. The Malmö Opera production of Little Night Music returned the musical to its Swedish locale and was perhaps most notable for the presence of famed opera star Kerstin Meyer (then 85) as Madame Armfeldt, her final stage role. Meyer died in April 2020 at 92.

Each of the above shows can be downloaded by clicking on the icon of a square with an arrow pointing downward on the audio player above and the resulting mp3 file will appear in your download directory.

Other Sondheim found on Trove Thursday include:

In addition, more than 400 other podcast tracks are always available from Apple Podcasts for free, or via any RSS reader. The archive which lists all Trove Thursday offerings in alphabetical order by composer was recently updated.