Sunday will never be the same

“Trove Thursday” presents two live versions of Sunday in the Park with George. 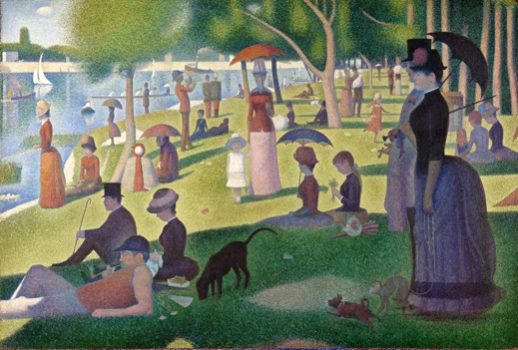 Thirty-five years ago tonight Sunday in the Park with George opened on Broadway and for that anniversary “Trove Thursday” presents two live versions of this challenging musical-theater work by Stephen Sondheim: one is complete starring Audra McDonald and Michael Cerveris and the other “music only” with Melissa Errico and Raul Esparza.

After I started working on this week’s post, I remembered exactly where I was on Sunday’s opening night, May 2, 1984. Strapped-grad-studenet-but-devoted-Handelian-stuck-in-the-Midwest that I was, I had taken a Greyhound bus that morning to Chicago to hear Rinaldo presented by Lyric Opera.

Its concert version extracted four of the principals from the Met’s concurrent spring tour but instead of inviting Edda Moser, Lyric tapped Carol Vaness. That unique combination—the only time Marilyn Horne squared off opposite Vaness’s Armida—compelled me to attend.

Rather than stay overnight, I raced, blissed out, to the station for my all-night ride back to Cincinnati. During the long layover in Indianapolis I went to the newsstand to buy The New York Times which I knew would feature the Sunday review. So, at around 4AM on May 3, I read Frank Rich’s ecstatic notice about the new musical “about” Georges Seurat that would eventually win the Pulitzer Prize.

I was particularly interested in his review as I had seen Sunday’s third Broadway preview the previous month. It was somewhat different from the finished production Rich acclaimed. When I attended, the second act was still “in process” with songs yet to be added including “Children and Art.”

But the first act even then was one of the most perfect and thrilling things I’d ever seen. I still remember, 35+ years on, the remarkable frisson as Mandy Patinkin assembled James Lapine’s meticulous reimagining of Seurat’s masterpiece Un dimanche après-midi à l’Île de la Grande Jatte (painted exactly 100 years earlier) while the rest of the cast sang the anthem “Sunday.” I’m sure I wasn’t the only one with tears in his beard when the lights came up for intermission

Years later, I witnessed another moving rendition of the “Sunday” at Sondheim’s 80th birthday tribute at Avery Fisher Hall in 2010.

For many it may be difficult to imagine anyone other than Bernadette Peters and Patinkin in the lead roles but I hope that some will find the McDonald/Cerveris and Errico/Esparza pairings fascinating in their own ways.

I liked but didn’t love the 2008 Broadway revival brought over from London but I unfortunately had to miss the most recent staging with Annaleigh Ashford and Jake Gyllenhaal.

However, the recording strikes me as very fine.

Another MacDonald/Cerveris/Sondheim collaboration was previously featured on “Trove Thursday”: Anyone Can Whistle with a rip-roaring Patti Lupone as the Mayoress.

Sondheim: Sunday in the Park with George

Both versions of Sunday in the Park with George can be downloaded by clicking on the icon of a square with an arrow pointing downward on the audio player above and the resulting mp3 files will appear in your download directory.

The archive which lists all “Trove Thursday” offerings in alphabetical order by composer has recently been updated to include all works posted up to last week.