Stephen Sondheim turns 90 on Sunday, prompting Trove Thursday to present his most “operatic” work, Sweeney Todd, in a rare 2002 performance with Christine Baranski and Brian Stokes Mitchell as the murderous duo. 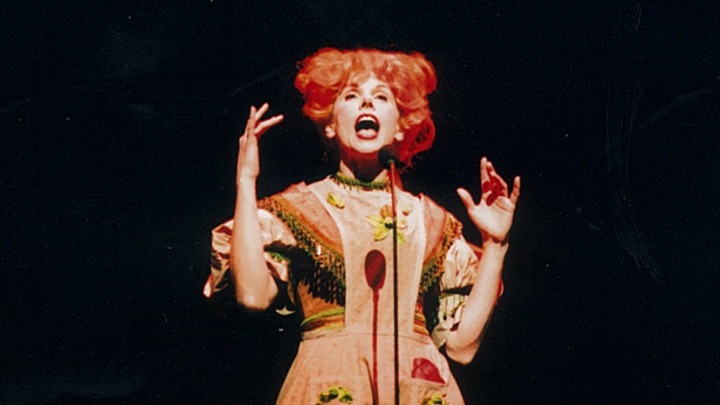 When I was nine my maternal grandmother began taking me to musicals. Every year from the 60s to the 80s cavernous Memorial Hall in my hometown was taken over by the Kenley Players for 12 weeks of summer stock from which we’d pick two to attend.

I became obsessed clipping out the reviews and listening to recordings from the library in prepare; one year I decided I had to see a third show so I went by myself to Pal Joey with Buddy Greco (who interpolated Slaughter on Tenth Avenue before intermission), Anne Jeffreys—and Dagmar!

After four seasons and no doubt due to my discovery of opera, I decided at 12 I’d outgrown musicals, so we stopped going—but not before I’d experienced some stellar local “diva” casting: Ethel Merman in Call Me Madam; Ann Blyth as an aging Magnolia in Show Boat; On a Clear Day with Shirley Jones; and Vicki Carr in The Unsinkable Molly Brown after which she belted her big hit “It Must be Him” as an encore.

Six years passed before I returned to Kenley one last time: my mother had a 2-for-1 coupon so we went to see A Little Night Music with Eva Gabor, whom I remember as a wonderful Desirée. Although years before I had seen Anita Bryant (shudder!) in Do I Hear a Waltz? with its Richard Rodgers music to Sondheim lyrics, LNM was my first all-Sondheim show. Looking back though I could kick myself for missing out on that summer’s other Sondheim show: Sonny Bono in A Funny Thing Happened on the Way to the Forum!

The original cast recording of A Little Night Music had been my first Sondheim LP purchase and it hooked me. I backtracked to Company and later eagerly snapped up Pacific Overtures. Somehow Follies eluded me until its star-studded 1985 New York Philharmonic recording although I do remember being mesmerized by “Losing my Mind” on the radio in the early 70s.

1979’s Sweeney Todd, Sondheim\s fifth show of that amazing decade, got a 2-LP treatment which I embraced after a very long, very hot walk to the record store closest to my first apartment. I finally got to see the show years later at a local university in a production that cheaply copied every detail of the Harold Prince original.

Opera companies embraced the work including New York City Opera where I saw it with Elaine Paige and Mark Delavan. Felicity Palmer and Thomas Allen performed it at Covent Garden and Bryn Terfel has made a specialty out of it—it may be the role that has been in his repertory the longest. He returns to Sweeney yet again next season in Zurich opposite Angelika Kirchschlager.

Although it was recently revived in New York at a small Off-Broadway theater where your ticket included a meat-pie meal, my last live Sweeney encounter was the 2005 Broadway run with Michael Cerveris in the title role. When I went to the theater to buy my ticket, I gave the date I wanted and the ticket-seller imperiously sniffed, “But Patti LuPone will be on vacation that week!” I said I loathed her and three guys in the box office gasped in unison. As expected, I was thrilled that Judy Kaye proved to be a marvelous Mrs. Lovett.

Before that though I went to see two shows at the 2002 all-summer Sondheim Festival at the Kennedy Center: the Sweeney offered today along with a fine Company with John Barrowman and Lynn Redgrave. There have been scarier barbers than Stokes Mitchell but he sang the music beautifully. But Baranski (whom one sees at the Met and other opera events around town) inevitably stole the show with her slyly ribald Mrs. Lovett.

Sweeney Todd can be downloaded by clicking on the icon of a square with an arrow pointing downward on the audio player above and the resulting mp3 file will appear in your download directory.

There’s lots of other live Sondheim available from past Trove Thursdays: Natalie Dessay as Fosca in Passion; a complete Follies featuring its original Broadway cast; plus Sunday in the Park with George (with added highlights of the 2002 Kennedy Center production with Raul Esparza and Melissa Errico) and Anyone can Whistle, both starring Audra McDonald, Lupone (perfect as the braying Mayoress in the latter) and Cerveris.

The archive listing all Trove Thursday offerings in alphabetical order by composer has been updated to include all material as of late last month.