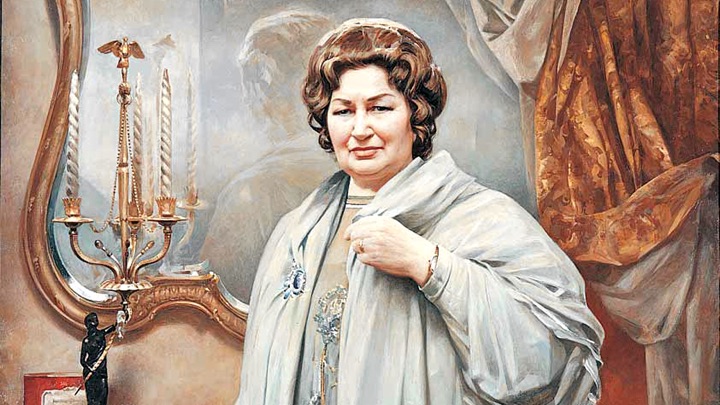 Though Joan claimed to be 19 during her trial and was known as the “Warrior Virgin,” Tchaikovsky’s heroine has regularly been taken by “mature” singers, sometimes sopranos, more often mezzos. For examples, Arkhipova was 50 at the time of this French Radio broadcast. The only time I have seen the opera staged was during a 1991 visit to the Met by the Bolshoi Opera in which Georgian soprano Makvala Kasrashvili—then 49—was Joan.

Dolora Zajick sang the work twice locally in concert: I missed the first for Opera Orchestra of New York in 1990 but I caught the second when Zajick (in marvelous form) returned to the work for the Collegiate Chorale seventeen years later when she was 55. Perhaps the most striking instance of a senior diva taking on the teenaged heroine was Mirella Freni’s US farewell to opera when she performed Joan at the Kennedy Center at the age of 70!

I unfortunately missed Arkhipova in her prime but I was lucky enough to catch her during her sole engagement at the Met. She debuted at 72 as Filippyevna at the premiere of the Robert Carsen production of Eugene Onegin in 1997. For many, she all but stole the Letter Scene from Galina Gorchakova’s refulgent if unsubtle Tatyana. Piavko too appeared at the Met but only when the Bolshoi Opera visited in 1975. The tenor was 16 years his wife’s junior and died just last year at 79.

The musical settings of Joan’s story also include Verdi’s Giovanna d’Arco which like the Tchaikovsky was based on Schiller’s 1801 play Die Jungfrau von Orleans. Trove Thursday posted it several years ago featuring Margaret Price, Carlo Bergonzi and Sherrill Milnes.

Several of the world’s finest filmmakers too have been drawn to the Maid of Orleans. Carl Theodor Dreyer’s The Passion of Joan of Arc surely stands as one of the greatest silent films and features Falconetti’s remarkably powerful portrayal of Joan. However, another great director one also much preoccupied with issues of faith, Robert Bresson, had one of his biggest failures with Procès de Jeanne d’Arc.

Two more recent French directors not known for period films have been fascinated with Joan. In the mid-1990s, Jacques Rivette made a sweeping two-part Jeanne La Pucelle starring Sandrine Bonnaire. The rigorous Bruno Dumont too has told Joan’s story in a pair of films: the rock-musical (!) Jeannette, l’enfance de Jeanne d’Arc (which to my surprise I liked a lot) and Jeanne which came out last year around the same time that COVID hit. I have a copy but haven’t watched it yet.

One more musical setting of Joan’s martyrdom is in the pipeline to appear on Trove Thursday.

Orleanskaya Deva can be downloaded by clicking on the icon of a square with an arrow pointing downward on the audio player above and the resulting mp3 file will appear in your download directory.

In addition, more than 400 other podcast tracks are always available from Apple Podcasts for free, or via any RSS reader. The archive which lists all Trove Thursday offerings in alphabetical order by composer was recently up-to-dated.