She’s a rebel, she’s a saint 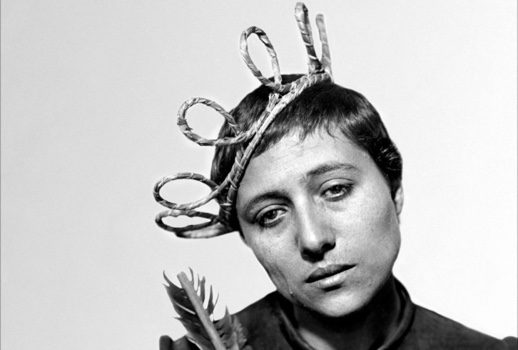 Leaping from last week’s Manon to an altogether different archetype of French womanhood, “Trove Thursday” offers—on her feast day—one of the many artworks inspired by the life of St. Joan of Arc: Verdi’s Giovanna d’Arco in a rare NYC concert performance with Margaret Price, Carlo Bergonzi and Sherrill Milnes—and I was there!

The Maid of Orleans continues to fascinate: Bruno Dumont’s film Jeanne (a sequel to last year’s hard rock musical Jeannette, l’enfance de Jeanne d’Arc) premiered just last week at the Cannes Film Festival. I’m a passionate Bressonian but I can’t get enthused about that director’s Procès de Jeanne d’Arc, especially when one compares it to Carl Th. Dreyer’s silent film with the mesmerizing Falconetti on the same subject.

Like many others I came to today’s Joan via Mozart: as a kid I bought both of Price’s LPs (first opera arias, then concert arias) on RCA Red Seal as well a disk of highlights from a Glyndebourne Die Entführung aus dem Serail. The last curiously omitted “Marten aller Arten” presumably because it was already available on the RCA collection. However, when I actually got to hear Price live, the first four times were singing Verdi.

In college, I began to feel increasingly frustrated that I had never experienced in the flesh the “big names” I heard on Saturday afternoon radio or on the “pirate” tapes I was now stealthily acquiring. When I discovered that Lyric Opera of Chicago was presenting a star-studded gala to mark its 25th anniversary—on my birthday, no less—I rushed to order tickets for the extravaganza about a 6+ hour drive from Cincinnati.

It was an amazing afternoon—my first encounters with Mirella Freni and Leontyne Price; Luciano Pavarotti, Alfredo Kraus and Nicolai Ghiaurov; as well as the only time I got to hear Jon Vickers, Carlo Cossutta and Geraint Evans.

The most memorable musical moment of the gala was Margaret Price’s “Willow Song and Ave Maria” from Otello. The excited crowd was unusually hushed throughout her performance until a roaring ovation greeted its conclusion. The Welsh soprano was the only artist the entire afternoon called back to the stage for a second bow!

The irony was that Price was in Chicago to rehearse Simon Boccanegra, a production in which she never appeared as she left town before the opening—an early sign to me of the unpredictability that dogged her career.

I had to wait more than five years to hear her again when I came to New York for Desdemona at the Met, her long-awaited debut there, some 15 years after her first US opera appearances as Pamina in San Francisco in 1970.

Later in 1985 I returned to New York for this concert of Giovanna d’Arco but it would be three more years before Price came back to the Met for Elisabetta in Don Carlo opposite Tatiana Troyanos, Neil Shicoff, Bernd Weikl and Ruggero Raimondi—and I flew in for that too!

She cancelled Fiordiligi the season after Don Carlo and I despaired of ever hearing her in Mozart but to my surprise she came back to the Met one last time in the fall of 1994 after an absence of five years for just two performances as the Countess in Le Nozze di Figaro.

Her colleagues were otherwise relative newbies: Dawn Upshaw, Susanne Mentzer, Dwayne Croft and Bryn Terfel who had made his much-heralded debut as Figaro just two weeks earlier. Of course, Price sang a single Countess at the Met 18 years earlier when the Paris Opéra visited but that was well before my NYC opera-going began.

The evening I heard her “Porgi amor” was most disappointing, dry and strained—I was crushed but then Price proceeded to give one of the most spirited and delightful portrayals of the Countess I’ve ever experienced. For once one could imagine this was the same Rosina of Rossini’s Il Barbiere di Siviglia. “Dove sono” was rocky too but some 15 years after our first encounter in Chicago I finally got my Price-Mozart experience.

Price only sang Verdi’s Giovanna a couple of times but Bergonzi that evening returned to his very first tenor role which he sang in a RAI broadcast opposite Renata Tebaldi in 1951, 34 years earlier! In addition to recording Giacomo opposite Montserrat Caballé and Placido Domingo, Milnes had previously performed his role in another New York concert presentation opposite Teresa Stratas in 1966.

In recent years Anna Netrebko and Marina Rebeka have tackled Verdi’s virgin-warrior and Giovanna continues to be occasionally revived—most often in concert—as it will be when it’s performed in July in Madrid with Carmen Giannattasio, Michael Fabiano and the inescapable Domingo, now as daddy.

It shows up again in October at the Monnaie in Brussels with a less starry cast.

Look for Tchaikovsky’s Joan of Arc on a future “Trove Thursday.”

Giovannaand the Otello excerptcan be downloaded by clicking on the icon of a square with an arrow pointing downward on the audio player above and the resulting mp3 files will appear in your download directory.

Margaret Price can also be heard on “Trove Thursday” as Mozart’s Pamina and Massenet’s Cendrillon. Over 230 other podcast tracks are always available from iTunes for free, or via any RSS reader.