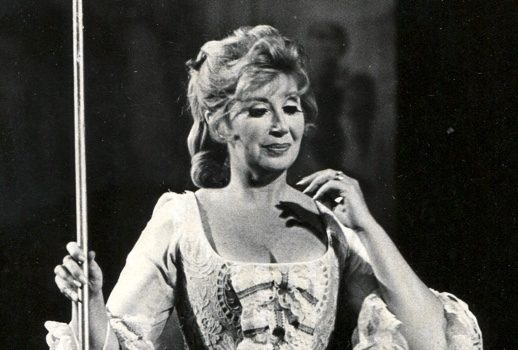 The Met has no sooner gone on vacation then we turn our attention to next season which features the rare opportunity to see the two best -known operatic adaptations of Prévost’s L’Histoire du chevalier des Grieux et de Manon Lescaut; so to mark Beverly Sills’s 90th birthday (May 25, 1929) “Trove Thursday” offers the late diva’s acclaimed Massenet heroine opposite her ideal Des Grieux, Alain Vanzo.

Manon is a long five-act opera and I confess I left a 2005 Met performance with Renée Fleming and Marcelo Álvarez at the second intermission. Today’s Mexico City Massenet, on the other hand, features a number of cuts including the once-traditional omission of the Cours-la-Reine and the moving of the Gavotte to the gambling scene. This reduces the total running time to a brisk two or so hours.

The year 1969 was particularly noteworthy for Sills: it began with her sole attempts at Zerbinetta in concerts with the Boston Symphony, a portrayal happily captured on video.

Then in the spring she made her La Scala debut in the famous/infamous L’Assedio di Corinto (replacing a pregnant Renata Scotto) opposite Marilyn Horne, Franco Bonisolli and Justino Diaz.

The Caramoor Festival in June welcomed her return to Handel’s Semele opposite Elaine Bonazzi and Léopold Simoneau and conducted by Julius Rudel, a marvelous pirate recording of which was one of the first items featured on “Trove Thursday.”

According to the invaluable online Sills performance archive, this September 18 Mexico City Manon was a one-off and followed a Marguerite in Faust at New York City Opera just four days earlier. It seems to have the only time Sills sang with Vanzo, one of the leading postwar Francophone tenors and—for me—it’s a perfect pairing.

Despite the occasional haphazard nature of this quickly put-together performance and the careless radio announcer who talks into the music more than once, I think it may be the best available souvenir of Sills’s beloved Manon.

In September Lisette Oropesa, recent winner of the Met’s Beverly Sills award, will become the latest American soprano to undertake Massenet’s Manon with the company.

Although Sills herself didn’t perform the role on that side of the Lincoln Center plaza, many other US-born divas have performed the role at the Met beginning with the composer’s muse Sibyl Sanderson (creator of Esclarmonde and Thaïs) who appeared in the company premiere in 1895. She was followed in the new century by Geraldine Farrar and Grace Moore among others.

The Met’s double-Manon season was to have given Sonya Yoncheva the chance to perform both Massenet and Puccini heroines but she thought better of tackling the Massenet.  Others though have pulled off that hat-trick at the Met including Dorothy Kirsten and Eleanor Steber, as well as Licia Albanese.

The Met’s previous Manon production opened in 1986 starring Catherine Malfitano who, along with Patricia Brooks and Faith Esham, also appeared in the work at New York City Opera.

I didn’t see Malfitano at the Met but I did catch Carol Vaness (opposite Alfredo Kraus) the following season. Although I was a devoted Vaness fan, the evening didn’t make much of an impression on me, nor did it when I saw the opera (or rather most of it) again with Fleming almost 20 years later.

The first season of the Met’s current Laurent Pelly production starring Anna Netrebko and Piotr Beczala, however, nearly turned me into a (marked) card-carrying Manon fan.

The Met’s Manon-preoccupation can’t wait for the fall though: next month American Ballet Theatre presents Kenneth McMillan’s 1974 full-length ballet based on Prévost and set to music by Massenet. The most noteworthy event of the eight-performance run of ABT’s Manon will be the company farewell of Italian heartthrob Roberto Bolle as Des Grieux on June 20.

“Trove Thursday” will get to Puccini’s setting next year—and maybe even Auber’s as well!

Manon can be downloaded by clicking on the icon of a square with an arrow pointing downward on the audio player above and the resulting mp3 file will appear in your download directory.

Other Massenet works on “Trove Thursday” include Cendrillon with Margaret Price and La Navarraise and Hérodiade, both with Rita Gorr as well as Régine Crespin, Guy Chauvet and Robert Massard in the latter.

Over 225 other podcast tracks are always available from iTunes for free, or via any RSS reader. The archive which lists all “Trove Thursday” offerings in alphabetical order by composer has recently been updated.