The lovely English soprano Valerie Masterson turns 84 today, prompting Trove Thursday to present her in a pair of her specialties. 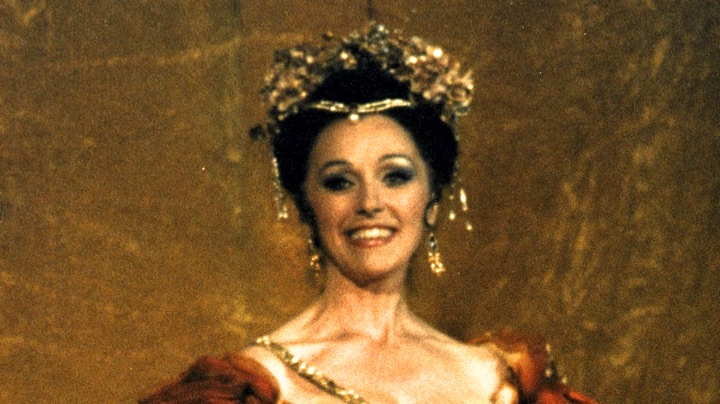 We’ll honor her with Gilbert and Sullivan’s The Yeomen of the Guard with Philip Langridge as her Colonel and Handel’s Scipione opposite the marvelous countertenor Paul Esswood, each conducted by a notable Charles—Mackerras and Farncombe, respectively.

Several years into my pirate-tape collecting habit, I received my first Mr. Tape catalogue in the mail. Scanning the enormous, head-spinning collection, I instantly identified my first purchase: a recent Aix-en-Provence Alcina with Christiane Eda-Pierre, Teresa Berganza, Ann Murray with Masterson (my first time hearing her) and Langridge as bickering lovers Morgana and Oronte.

Not too long after, I also ordered both today’s Scipione and the now-legendary English National Opera Giulio Cesare in which Masterson reigned supreme alongside Janet Baker. That 1979 live broadcast, far superior to the rather lifeless studio audio/video recording made years later, remains available on a Trove Thursday post from five years ago.

Once I began opera-trips to NYC, I jumped at the chance to hear Masterson in Handel. For the composer’s tricentenary Matthew Epstein produced a lavish series of concerts at Carnegie Hall and Orlando featured Marilyn Horne’s first assumption of the title role with Masterson as Angelica, the hero’s beleaguered love object.

I had no idea that the soprano, as far as I know, would not appear in New York again.

What I also didn’t know at the time was that Masterson had first appeared in New York 20 years earlier as a member of the D’Oyly Carte Opera Company and participated regularly in its visits to City Center.

After leaving the Gilbert and Sullivan troupe in the late 1960s she joined the English National Opera and soon became one of its biggest stars particularly acclaimed in French operas like Manon, Faust, Les Pêcheurs de Perles, Roméo et Juliette and Le Comte Ory, often paired with John Brecknock. Like the recently deceased Pauline Tinsley,

Masterson didn’t appear very often at the Royal Opera; her roles there included Marzelline in Fidelio (conducted by ENO stalwart Reginald Goodall with whom she recorded the Siegfried Woodbird) and Mme Lidione sharing the stage with Tinsley as Mère Marie. In her most important Covent Garden engagement, she starred in a new Semele under Mackerras with Robert Tear and (the underrated) Kathleen Kuhlmann.

As she approached 40, Masterson began to be in demand throughout Europe and eventually returned to the US without D’Oyly Carte. For San Francisco she debuted as Violetta (a role she recorded in English for the Peter Moores Foundation) and soon returned as Cleopatra in the ENO production opposite Tatiana Troyanos. For her final SF gig in 1985, she was again Horne’s Angelica.

Chicago would only hear her as Antonia in Les Contes d’Hoffmann in 1982, two years before her New York return as Nina in a concert of Massenet’s Chérubin with Frederica von Stade. Later that year she’d make her only appearances at the Metropolitan Opera, not with the home company but as Gilda (but not on its first night) in the notorious Jonathan Miller “Mafia” Rigoletto during the ENO’s extensive US tour.

Besides her participation in a number of D’Oyly Carte G&S sets, Masterson’s opera recordings were few: besides a recital of French arias, her participation in the Philips set with Montserrat Caballé of Rossini’s Elisabetta, Regina d’Inghilterra arose when Ileana Cotrubas dropped out of the attached Aix Festival production.

On the other hand, her rise to international prominence in the late 1970s coincided with more and more live opera telecasts, so there are a good number of Masterson videos. Some were released commercially like the classic Nicholas Hytner Serse from the ENO (captured a bit late for both her and Ann Murray) and a Glyndebourne Die Entführung aus dem Serail.

Others, like a rare Gounod Mireille with Luis Lima from Geneva, have turned up complete on YouTube.

On another, she more than holds her own in the opulently cast (dare one say over-cast?) Paris L’Incoronazione di Poppea with Gwyneth Jones, Christa Ludwig, Jon Vickers, Richard Stilwell and Nicolai Ghiaurov.

One important item currently MIA though is her sole US video appearance: a 1985 Philadelphia Faust made particularly special by Marguerite’s seducer—the wonderful Alain Vanzo in a rare stage appearance in this country.

Today’s broadcast comes from an exhaustive BBC G&S project—several were conducted by Mackerras featured Masterson. While Yeomen isn’t available on YouTube, two of their other collaborations are: The Pirates of Penzance. . .

and Princess Ida (again with Langridge).

The ORTF Handel had its origins in a 1972 staging starring Masterson by London’s important Handel Opera Society led for many years by Farncombe. Its best-known offering was likely the very fine 1959 Rodelinda (also in English) under Farncombe with Joan Sutherland, Margreta Elkins, Baker and Patricia Kern which has been issued by many CD labels.

This much-cut Scipione differs markedly from the complete studio recording by Christophe Rousset in that it uses a later version in which the title character’s part was transposed by Handel for tenor.

This broadcast often lists Scipione as sung by noted Handelian Anthony Rolfe Johnson, but it is in fact Anthony Roden.

Gilbert and Sullivan: The Yeomen of the Guard