Stratas in the Sixties

Teresa Stratas turned 83 yesterday and Trove Thursday features one of the recent past’s most interesting yet frustrating artists in two rare broadcasts. 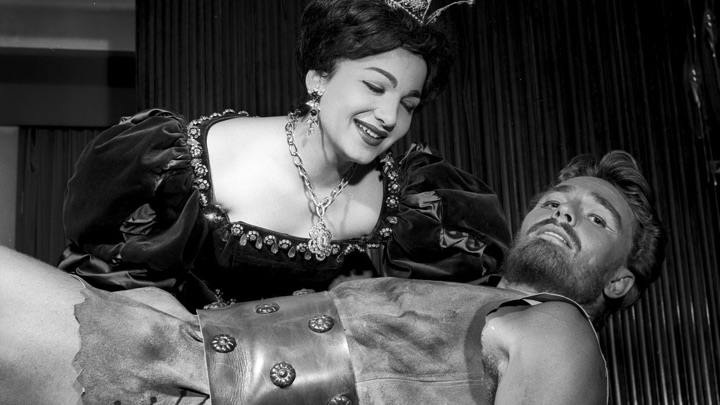 We will hear the world premiere of Falla’s Atlantida (the Canadian soprano’s sole La Scala engagement) co-starring Giulietta Simionato (not pictured) and the prologue from a 1967 Munich Ariadne auf Naxos in which she falls for Sylvia Geszty.

Though I only saw Stratas perform twice, both were indelible evenings. My first-ever Met opera featured her last-ever Mimi during the initial run of Franco Zeffirelli’s then-new production. I never imagined it would still be in use nearly 40 years later! She first sang Mimi at the Met two decades earlier, her big break in New York after three years of tiny roles, although she had been given a single Liù in Turandot opposite Birgit Nilsson and Franco Corelli in her native Toronto the previous year. Stratas’s unforgettably fragile, heartbreaking seamstress (at my first-ever live Bohème) remains a treasured memory.

Her aching vulnerability was again a major attraction of the world premiere of The Ghosts of Versailles which I enjoyed at the time and was indeed a raging success but hasn’t aged all that well. I understand, though, a Met revival is planned with Sonya Yoncheva stepping into the Stratas’s role of Marie Antoinette. But why?

After the Zeffirelli Bohème Stratas vanished from the Met for seven years, returning as a triple threat in a revival of Il Trittico. I hadn’t yet moved to New York but friends who lived here cursed her loudly for not showing up at the performance they’d bought expensive tickets for. As it turned out she appeared just thrice in the triple-header, once she turned Suor Angelica over to Diana Soviero and for her final go she sang only Giorgetta.

But by then New York audiences would have been familiar with Stratas’s unpredictability. Surely her most infamous Met disappearance was from the live telecast of the three-act Lulu which she had premiered in Paris in the Patrice Chéreau production two years earlier. Julia Migenes had already taken her place at the previous Lulu so it wasn’t quite the last-minute triumph the media trumpeted. At an Opera News tribute to Stratas at Town Hall a while back, remarkable footage of her and Franz Mazura at the Lulu dress rehearsal was shown: it’s unlikely but how wonderful would it be to see the entire thing!

Stratas’s American opera career was almost entirely Met-centric. Her one Lyric Opera of Chicago appearance was as Mélisande in 1992 (she missed the first two performances, because of course she did) and just twice did San Francisco Opera host her, first as Butterfly in 1966, then as Mimi (her first encounter with José Carreras as her Rodolfo) in 1973. I seem to remember that a conflict over a La Périchole in Miami had everything to do with her dropping out of the Met’s new Lulu in 1977.

Recently a friend was incredulous when I mentioned that Stratas had been announced for Tosca at the Met. I eventually found the season calendar which listed a run of performances beginning in late March 1991 in which she was to sung Puccini’s heroine opposite Neil Shicoff. Expectedly both withdrew leaving expectant audiences with Maria Guleghina and Bruno Beccaria!

An opera-lover’s life is always rife with nostalgic regret and I’m now sorry I skipped Stratas so many times after I moved to New York. My aversion to Gwyneth Jones prevented me from sampling Stratas as Liù; a bigger regret is passing on Mme. Lidoine opposite Dawn Upshaw and Helga Dernesch, who also was Begbick for the soprano’s final Mahogonny Jennys! I did have tickets for the revival of The Bartered Bride but that proved to be her final Met cancellation.

I also missed her 1994 Komponist, a role which spanned more than 30 years of her Met career. She performed it there just eight times, the first on Christmas Day 1963. This surprising longevity set me to wondering if other Met artists had similarly sustained a major role for so many years. While not a fully committed archive-a-holic I did uncover two other 31-year spans: Mignon Dunn as Azucena 1959-1990 and Robert Merrill as Germont 1945-1976. Of course, Mr. Record Book proved the champion in my limited survey: 41 years for Maurizio in Adriana Lecouvreur from 1968 to 2009 when it was substantially transposed.

While still down the search-engine rabbit hole, I discovered that Mirella Freni’s La Scala Mimis had spanned 1963 to 1994, while Leonie Rysanek sang Sieglinde at the Wiener Staatsoper for more than 32 years. But the (untransposed) winner must be Edita Gruberova’s astonishing run as Zerbinetta also in Vienna from 1973 to 2009!

Do parterre readers have other favorite big-league long-runs?

There is much more to say about Stratas and I hope to return to her at a future date. But in the meantime, please also check out a rare Verdi Requiem on a previous Trove Thursday.

The Falla and Strauss can be downloaded by clicking on the icon of a square with an arrow pointing downward on the audio player above and the resulting mp3 files will appear in your download directory. Needless to say, the sound quality of these ten broadcast tracks varies considerably.