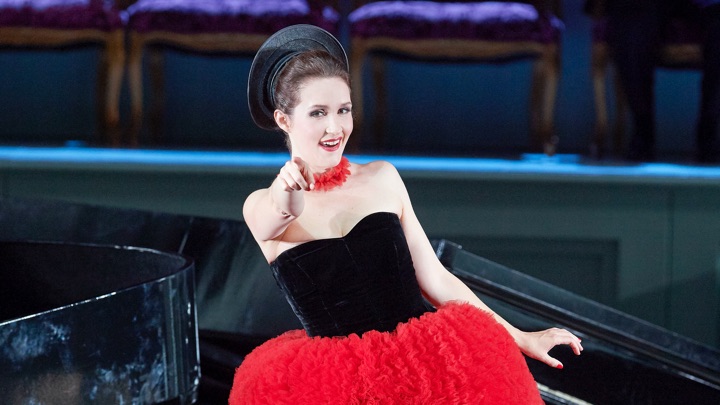 This Sunday Erin Morley wrests Lakmé from Sabine Devieilhe for one night to perform the Brahmin princess with Washington Concert Opera, followed on May 28 by Gilda in Rigoletto at the Metropolitan Opera.

In the spring of 2007, I was eager to finally see La Finta Giardiniera, the charming rarely performed early work by Mozart. Juilliard Opera was staging it, and there was a good deal of buzz about Isabel Leonard, the mezzo singing the trouser role of Ramiro. While both Leonard and Brenda Rae, the Arminda, were very good, I was blown away by a soprano I knew nothing about who portrayed the title role of Violante, disguised as Sandrina. I made a note to myself to look out for Erin Morley in the future.

Two years later, friends convinced me to take the long bus ride to Bard College to see Les Huguenots. To my surprise, I quite enjoyed the Meyerbeer, especially Morley and a tenor I was hearing for the first time: Spyres. By the way, last fall Morley returned to Meyerbeer via concert performances of Robert le Diable conducted by Marc Minkowski at the Bordeaux Opera. I understand that the cast led by John Osborn subsequently recorded the work under the auspices of the busy Palazzetto Bru Zane.

Over the next few years, I heard Morley often—in smallish roles in Peter Grimes, Pique Dame, The Nose, Hansel und Gretel, Ariadne auf Naxos and Götterdämmerung at the Metropolitan Opera where her breakthrough was as Constance in the 2013 revival of John Dexter’s legendary production of Dialogues des Carmélites.

One of my favorite concerts from around that time was my first Morley-Mozart encounter since Finta. I’ve written of my love with the composer’s great soprano concert arias,  so as they aren’t performed very often locally, I jumped at the chance to hear “Vorrei spiegarvi” and “No che non sei capace” at the 2015 Mostly Mozart Festival. To my surprise, a pirate recording of Morley singing the former turned up on YouTube.

Am I being ungrateful to wish that the other deliciously florid piece was also available?

Many will remember how Morley stole the show during the Met’s streamed At Home Gala accompanying herself on the piano in a brilliant “Chacun le sait” from Donizetti’s La Fille du Régiment.

Others may also be familiar with Morley either from her delightful Olympia or her exquisite Sophie which I first caught at the Met with Martina Serafin and Daniela Sindram in 2013 when she stepped into the role after Mojca Erdmann vanished after the dress rehearsal. Morley, of course, returned to the role several years later for the premiere of the Robert Carsen production stealing Elina Garanca from Renée Fleming.

Next season at the Met Morley once again sings Sophie on the occasion of Lise Davidsen’s first-ever Marschallin—a casting I still can’t quite wrap my head around. And after having debuted Pamina in the Met’s shredded Magic Flute for kids, she’ll get the chance to do the role there properly when Simon McBurney’s pandemic-delayed Die Zauberflöte finally arrives in spring 2023.

Of the Morley’s projects for next season, the one I’d most like to hear is her first Handel role since a superb Orlando Angelica six years ago with the English Concert. She’ll be Morgana when Minkowski leads his Musiciens du Louvre in a European tour of Alcina. Her “Credete al mio dolore” should be divine.

When I realized I hadn’t yet posted Carmina Burana, I pulled out the broadcast of the 2012 New York Philharmonic concert I’d attended. Then I thought I’d add Morley’s Brentano, and then this enterprise just grew and grew into a Trove Thursday Mega-Post ©!

The other selections include arias, a duet and a trio from Orlando, Marguerite’s “O beau pays” and duet with Raoul from Les Huguenots, as well Konstanze’s three Entführung solos. Although her Brentano doesn’t include the dramatic sixth song which many sopranos omit—though Golda Schultz performed it this year with the New York Philharmonic—Thielemann included instead the world premiere of a song by Thomas Hennig based on themes by Strauss.

One prays that her first Met Gilda (which is happening due to the withdrawal of Kristina Mkhitaryan) will prove luckier than her livestreamed debut at the Vienna Staatsoper when Sir Simon Keenlyside, her Rigoletto, had a meltdown during act 2 and had to be replaced by Paolo Rumetz.

Thanks to Orla for supplying me with the Mozart broadcast.

Each Morley selection can be downloaded by clicking on the icon of a cloud with an arrow pointing downward on the audio player above and the resulting mp3 file will appear in your download directory.