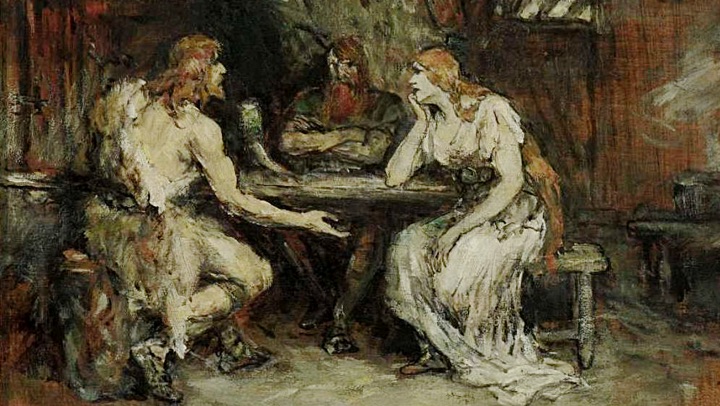 Whether its transatlantic journey will actually happen may depend on how Friday’s performance goes. Stefan Herheim’s recent Ring at the Berlin Deutsche Oper was previously mentioned as a candidate to replace the Met’s much-reviled Robert Lepage production but that transfer won’t happen. Based on some hideous photos I’ve seen of the Herheim, skipping it was probably a very good thing.

Orchestras then have it much easier than opera companies when it comes to the Ring. The first act of Walküre requires just three singers and lasts an hour is a near-perfect fit for an after-intermission offering. Despite its frequent programming, I’ve only heard the act once in the concert setting.

In the fall of 2001 Daniel Barenboim and the Chicago Symphony brought three Wagner-centric concerts to Carnegie Hall including a complete Tristan und Isolde featuring an incandescent Waltraud Meier as the Irish princess. Elizabeth Connell sang the Immolation Scene in another while the third included Walküre’s first act which I most remember because Angela Denoke’s Sieglinde never once looked at Peter Seiffert’s Siegmund, even though he was standing right next to her!

Putting together today’s TT I sought unusual items like Marilyn Horne’s rare stab at Sieglinde (from the same year she had been announced to open the Met in Tannhäuser) and Karita Mattila and Jonas Kaufmann’s once-only Wälsung pairing.

Lise Davidsen has been announced as the Met’s future Sieglinde (why not its Brünnhilde, IMHO a more suitable role?), and Angela Meade’s recent debut in Wagner may interest some. Amber Wagner’s premature retirement prompted inclusion of her Act I Sieglinde which was performed the night before the remaining two acts at Tanglewood.

I’ve avoided performances available on YouTube with the exception of the ecstatic Jessye Norman-Jon Vickers pairing, another one-off. I find my fine-sounding copy superior to the YouTube version and it comes from a dub I made myself from a reel-to-reel copy I bought not long after the performance was given.

Norman and Ozawa had collaborated on performances of the act in Boston earlier that year but their Siegmund then was Karl Walter Böhm. Broadcasts of that performance were easy to come by but the later Tanglewood version with Vickers I only ever saw offered by one pirate purveyor. Norman, Vickers and Ozawa would return to Tanglewood three years later for the second act of Tristan, the other Wagner “bleeding chunk” symphony orchestras often program.

The next local Walküre Act I arrives at Carnegie Hall in June when Yannick Nézet-Séguin leads Christine Goerke, Brandon Jovanovich, Eric Owens and the Met Orchestra.

Wagner: Die Walküre—Act I (in concert)

Each Walküre act can be downloaded by clicking on the icon of a square with an arrow pointing downward on the audio player above and the resulting mp3 file will appear in your download directory.