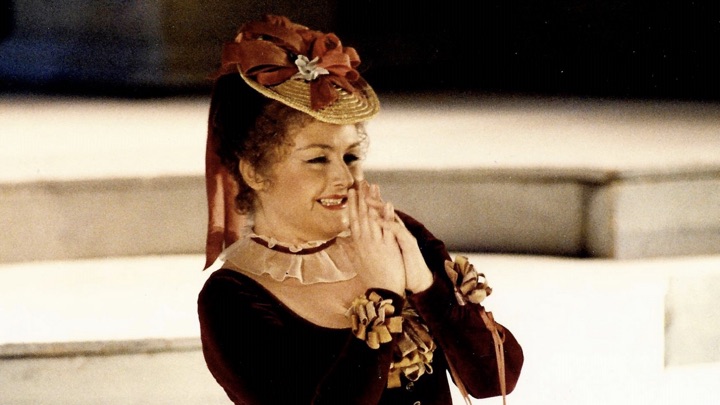 I was in college when I became an early fan of Gruberovà’s: Good Sound Associates, a pirate tape purveyor that got lots of my money, posted for sale the broadcast of the Vienna Staatsoper’s recent Ariadne auf Naxos from November 20, 1976 which featured the soprano’s star-making Zerbinetta. It was conducted by Karl Böhm with Gundula Janowitz, Agnes Baltsa and James King. I must admit that I still find Zerbinetta’s bits the least interesting parts of Ariadne but this breathtaking new soprano compelled me to listen over and over to “Grossmächtige Prinzessin!”

GSA then offered a live Salzburg Mozart-Woche concert of Mitridate Re di Ponto from two months after the Ariadne. Gruberová sang Sifare (with Verdi’s Oscar, her only other male role?) with her trademark effortless bravura, more than holding her own opposite Baltsa again, Arleen Augér, Ileana Cotrubas and Werner Hollweg. This cast then made a studio recording, part of the early Mozart opera series conducted by Leopold Hager, and Mitridate then became one of Gruberovà’s first important calling cards.

It would be well over a decade after those broadcasts that I had a chance to hear the Slovak soprano in person. But I was able to continue to savor her Mozart via another rare work, Il Sogno di Scipione, plus two LPs of concert arias, one conducted by Hager, the other by György Fischer.

After the shocking news of the soprano’s death was announced, several posted here on parterre box that they were listening with pleasure to Gruberovà’s Mozart concert arias and I wondered which collection? My guess was that it was likely her famed live 1991 CD with Nikolaus Harnoncourt and the Chamber Orchestra of Europe.

While it remains an impressive achievement, I prefer the Hager/Fischer groups from more than a decade earlier. While Gruberovà’s voice remains its freshness and astonishing agility, her interpretations for Harnoncourt had become more mannered replete with the distracting, extreme dynamic shifts that she would increasingly favor.

After two unheralded first Met appearances as the Queen of the Night in early January 1977, she’d return to the company as a full-fledged star two years later for a run of Zerbinettas that also featured Leontyne Price in her first (and only) Strauss role there. As many know, Price fell ill and would sing only the first and last performances. As a bonus, I’m including an in-house pirate memento of Gruberová’s final local Zerbinetta.

For the only time in my life on a marathon Saturday in October 1988 I stood for two operas at the Met: Lucia di Lammermoor followed by Il Trovatore. I confess that my very first Trovatore made more of an impression than the Donizetti despite Eva Marton’s miscast Leonora. Dolora Zajick’s robust Met debut that night as Azucena made it particularly special. But Gruberová and Francisco Araiza made an ardent Lucia and Edgardo during the matinee. However, my Gruberová encounter the following October would prove entirely more memorable.

The first new Franco Zeffirelli production of La Traviata was announced for October 16, 1989 with Kleiber conducting his hand-picked trio of Gruberovà, Shicoff and Brendel. Since I often made October trips to NYC that premiere made a perfect centerpiece especially since Kleiber’s Met debut the previous year—La Bohème with Mirella Freni and Luciano Pavarotti—had proved an unforgettable evening.

While the online Met archives are indispensable, they don’t tell the full story. While I knew that the Met’s plans for its new Traviata that season didn’t turn out quite as expected, I hadn’t recalled just how badly they’d gone awry until I pulled out my 1989-90 Met Ticket Service Calendar. Find below the announced casts and conductors for that season’s thirteen (!) iterations–followed by who actually performed!

As you can see, Gruberová only showed up for four of her announced 11 Violettas and the first cast appeared together just once—for the premiere that I attended. Whew!

Of the three roles that I heard Gruberová perform at the Met, Violetta to my surprise was the most impressive—perhaps due to Kleiber in the pit. Her first act scena was just fine though the “Sempre libera” was a bit hectic and its final high F-flat harsh, but the remainder was beautifully nuanced and deeply felt.

A year and a half later, she’d return for five performances of I Puritani conducted by Richard Bonynge. Though Chris Merritt bowed out of the premiere, he was her Arturo for the one I heard. After that run she would never again appear at Lincoln Center, nor I believe in the US at all. She was announced for a revival of Semiramide in the fall of 1992 but canceled to be replaced by Christine Weidinger.

More than a decade after the Elvira I got an unexpected chance to hear Gruberová once more. While in Berlin for the Staatsoper’s April 2002 Wagner Festtage, I saw that on one of my free nights the soprano would be giving a recital at the Deutsche Oper; tickets were available and inexpensive, so I attended. And it proved a revelation!

I had rather lost track of Gruberová during the 90s as she concentrated more and more on the Donizetti and Bellini operas that I rarely listen to. At 55 and more than 30 years into a busy career, that Berlin evening she sounded as if time had stood still, and the voice had a shiny, vibrant impact that I didn’t recall experiencing in the much larger spaces of the Met. She radiated an absolute joy in performing and the audience ate it up. Although there were coloratura showpieces offered as encores, I most remember her gently lovely rendition of Schubert’s “Der Hirt auf dem Felsen” for which a guest clarinetist joined the soprano and her pianist.

La Traviata, I Puritani and “Grossmächtige Prinzessin” can be downloaded by clicking on the icon of a square with an arrow pointing downward on the audio player above and the resulting mp3 files will appear in your download directory.