As Tokyo’s games wind down, Trove Thursday’s are just beginning with settings of L’Olimpiade, an important Metastasio libretto, by Giovanni Pergolesi and Domenico Cimarosa, both featuring gold-medal mezzo Anna Bonitatibus. 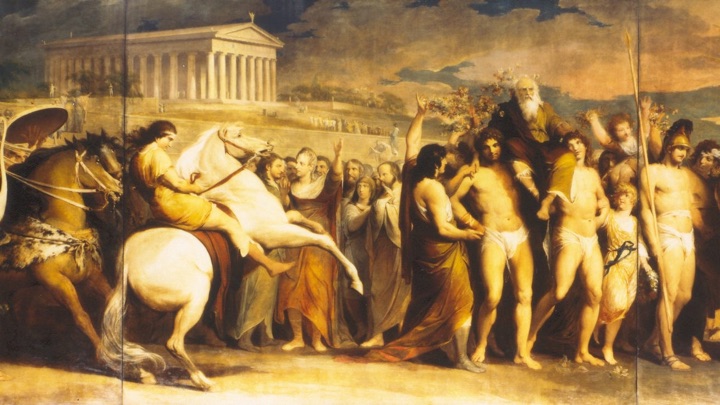 For a previous Trove Thursday, I posted an important early US performance of Johann Adolph Hasse’s L’Olimpiade; in addition, parterre box archives contain a CD review of a recent pasticcio cobbled together from bits of Olimpiade by 16 different composers.

Therefore—it being August and all—rather than just repeat myself, I’ll refer interested readers to those links for lots of info about Metastasio’s spin on romantic entanglements during the ancient Olympic Games.

If Pergolesi and Cimarosa’s versions (separated by nearly 50 years) don’t suffice, YouTube handily supplies yet another: Baldassare Galuppi’s from 1748.

While several other mezzo sopranos we all can name have for years dominated the world’s stages and recording studios performing baroque music, Italian Bonitatibus has more quietly also been doing marvelous work in the same repertoire. She has released a number of solo recordings, the most impressive being her superb two-CD Semiramide anthology which I reviewed here six years ago.

I’m unsure whether Bonitatibus has ever performed in the US so I was thrilled to catch her at Munich’s Bayerische Staatsoper in 2005 starring in a revival of Nigel Lowery’s production of Gluck’s Orphée et Eurydice. Some may be familiar with the DVD starring Vesselina Kasarova, but Bonitatibus proved an equally committed Orphée, noble and splendidly sung (including the spectacular Viardot cadenza at the conclusion of “Amour viens rendre à mon âme”), without any of Kasarova’s grotesque mannerisms.

Bonitatibus’s Pergolesi Licida and Cimarosa Megacle (both trouser roles) dominate each of today’s casts. (Note the surprising Argene from 20 years ago of current verista Ermonela Jaho.) Of particular note are the mezzo’s spectacular duets as Megacle with the young Patrizia Ciofi.

After several decades, “the other Anna” continues to perform baroque works at the highest level. Earlier this year she repeated her acclaimed Handel Agrippina when the Hamburg Staatsoper restaged Barrie Kosky’s Munich production. Its broadcast showed her still in sovereign form.

As a non-Olympic bonus, I’m also including today Bonitatibus’s arias from another recent 18th century venture, the modern premiere of Riccardo Broschi’s La Merope from the Innsbruck Festival in which she portrayed the title role. Broschi was, by the way, the brother of the famed castrato Farinelli.

Listeners should be warned that this primitive-sounding in-house “pirate” can be noisy at times but the singer’s idiomatic élan shines through nonetheless.

Many thanks to “hubertroad” who facilitated my obtaining the Pergolesi and Cimarosa broadcasts some 15 (!) years ago.