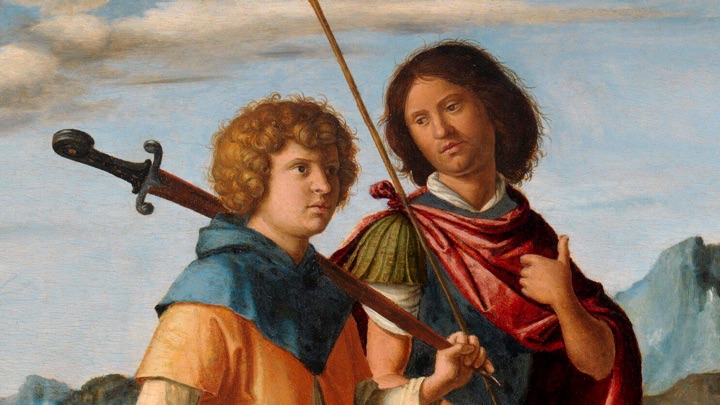 The affection between Saul’s son Jonathan and David, the heroic slayer of Goliath, has long been cited as the Bible’s most intense embrace of same-sex love. Perhaps it’s not coincidental that the most moving musical depictions of that loving relationship have been by two never-married composers: George Frideric Handel with his towering 1738 oratorio Saul and Marc-Antoine Charpentier whose David et Jonathas was composed as an unstaged concert work for a Jesuit college half a century earlier.

To most opera-lovers Charpentier is “Gustave” who wrote Louise, but another, more important French composer preceded him by several centuries. For this Pride 2021 Trove Thursday installment, I’m going to be lazy and refer readers to a pair of parterre box pieces I wrote about Marc-Antoine and David et Jonathas when the Brooklyn Academy of Music presented Les Arts Florissants (the ensemble’s name derives from a short Charpentier opéra) in Andreas Homoki’s production of the tragédie biblique.

Padmore, today’s David, lately has been hailed primarily as an exponent of German lieder and the music of Benjamin Britten but much of his early career centered on the French baroque. When looking over a list of the many times I attended Padmore performances between 1991 and 2004, I was surprised to note how often I heard him in Charpentier. After I moved to New York City, my first LAF performance was at BAM, of course, and included the famous Te Deum and the ravishing Assumpta est Maria. That memorable concert included not only my first live Padmore encounter but my first of many with Sandrine Piau as well.

The tenor would return to New York in 1993 for the title role in Charpentier’s Actéon, a one-act pastorale, as well as participating two years later in a LAF concert of sacred music that included one of the composer’s beautiful Leçons de Ténèbres. In between he was Jason to Lorraine Hunt Lieberson’s searing sorceress in the magnificent LAF/BAM production of Médée, Charpentier’s superb sole tragédie mise en musique.

I attended David et Jonathas when Haïm and the Orchestra of the Age of Enlightenment brought it to Alice Tully Hall. Padmore, however, was not the David; the role was sung instead by Paul Agnew who also had been Padmore’s alternate during the New York Médée run and was again when LAF toured Rameau’s Hippolyte et Aricie (again with Hunt Lieberson) here several years later. Agnew who still performs sometimes as a tenor has become co-director of Les Arts Florissants and led the group in an all-Charpentier sacred program during the Mostly Mozart Festival several seasons ago.

Naouri, too, is a French baroque veteran and was also in the incredible BAM Hippolyte as Thésée. The bass-baritone who has lately been singing Don Pasquale and Scarpia occasionally still returns to the 18th century. He performed Handel in New York as recently as 2013.

Choir and Orchestra of the Age of Enlightenment
Conductor: Emmanuelle Haïm