Still under the spell of the recent stream of the Met’s 1983 Les Troyens (finally!), Trove Thursday offers an important musical and mythic antecedent to Berlioz’s epic work: Gluck’s Iphigénie en Aulide, as well as Iphigenia in Aulis, Wagner’s 1847 reworking of the earlier composer’s first French tragédie. 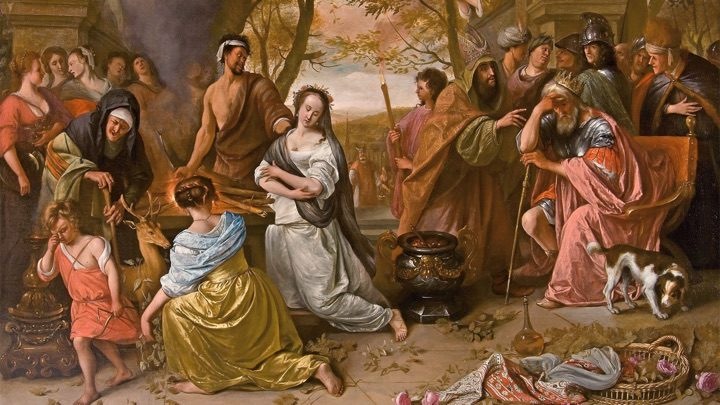 The Met plans to revive Stephen Wadsworth’s production of Iphigénie en Tauride conducted by debuting Nathalie Stutzmann during the opening week of its 2021-22 season.

In the meantime, we move to an earlier event in the Trojan War saga involving the doomed house of Atreus and the unfortunate daughter of Agamemnon and Clytemnestra.

Other than Donizetti’s several works involving England’s Queen Elizabeth I and, of course, Wagner’s Ring, are there other instances where a composer has returned to the same character for another opera? As it is the stronger, more focused of Gluck’s pair of Iphigenia works, Tauride is performed far more often than its predecessor, yet Aulide offers its own rewards.

Other than occasional performances of Orfeo ed Euridice, New York hasn’t been very hospitable to Gluck in the past few decades with the exception of the Juilliard School which since 1999 has twice presented Armide and Iphigénie en Aulide. Its most recent Aulide was a joint effort in 2015 with the Met rather limply conducted by Dame Jane Glover that featured rising stars Ying Fang, Virginie Verrez, Andrew Stenson, Yunpeng Wang and Brandon Cedel. Some liked it more than I did, but on the whole Juilliard’s earlier Aulide led by Ari Pelto in 2007 with Paul Appleby as Achille offered an appreciably stronger case for Gluck’s work.

Today’s Aulide comes from the 2002 Glyndebourne Festival which oddly enough has yet to present Tauride. Its production directed by Christof Loy features the strong pairing of Katarina Karnéus and Gerald Finley as the title character’s warring parents and its period-instrument orchestra is led by Gluck conductor par excellence Ivor Bolton.

Gluck wasn’t the first composer to tackle the haunting story of a father sacrificing his daughter to assure his military scheme to rescue his brother’s wife. Earlier in the 18th century Apostolo Zeno’s Italian libretto Ifigenia in Aulide was set by many composers, first by Caldara in 1718. Seventeen years later Nicola Porpora composed his Ifigenia and three years later Giovanni Porta offered his.

A more recent composer skipped the heroine’s adventures in Aulis and Tauris taking her directly to New York’s most expensive borough.

A major composer tinkering with a great work by another isn’t entirely uncommon. One thinks of Mozart’s substantial revisions of Handel’s Messiah, Acis and Galatea and the Ode for St. Cecilia’s Day, for example. His German versions are still performed on occasion, particularly Die Messias.

Mozart would get his turn in the 20th century when Richard Strauss set to work on Idomeneo, the only one of the works I’ll mention that I’ve heard performed live. Lincoln Center’s Mostly Mozart Festival presented Gerard Schwarz leading a cast headed by a commanding Anthony Dean Griffey (replacing a tenor I don’t recall), Angelika Kirchschlager and Christine Brewer as Ismene, Strauss’s new name for Elettra. As I know Mozart’s original very well, his changes made for an occasionally disorienting evening.

In 1889, Strauss also took on Iphigénie en Tauride but the more persuasive Gluck-reworking occurred in the 1840s when Richard Wagner between Tannhäuser and Lohengrin adapted Iphigénie en Aulide. His handiwork which included a new ending and all sorts of other emendations premiered in 1847 in Dresden, the site of today’s concert performance.

Wagner’s Iphigenia in Aulis has been recorded several times and was performed hereabouts as recently as 1984 at the Waterloo Festival with Alessandra Marc in the title role. Though I’ve never heard Aulis live, the two operas I attended at the Staatsoper during my first trip to Berlin in 1995 fit perfectly with today’s Trove Thursday.

I went to the famous/infamous Achim Freyer production of Iphigénie en Tauride (in French with no Strauss tinkering) followed the next night by Tristan und Isolde featuring today’s Aulis daughter and father—Eva-Maria Bundschuh and Siegfried Lorenz—as Isolde and Marke. The soprano, in particular, opposite a stalwart Heikki Siukola as Tristan, was a ringingly passionate Irish princess.

Iphigénie en Tauride will arrive on Trove Thursday later this year (fingers crossed) as a preview for the Met revival.

Orchestra of the Age of Enlightenment

Both versions of Iphigénie can be downloaded by clicking on the icon of a square with an arrow pointing downward on the audio player above and the resulting mp3 files will appear in your download directory.