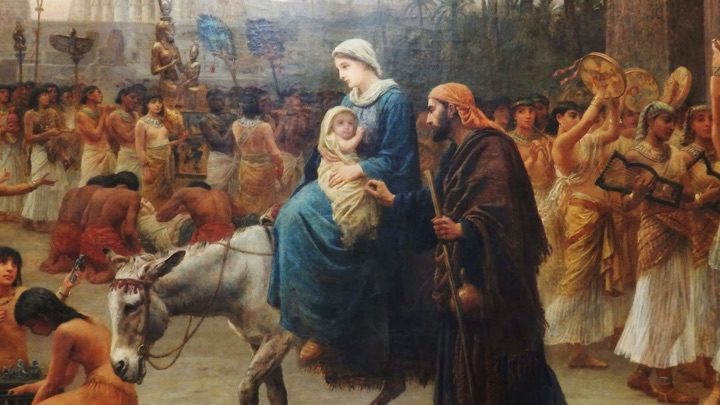 Along with Bach’s Christmas Oratorio (or at least the first three parts of it) and Tchaikovsky’s The Nutcracker, Handel’s Messiah remains the quintessential Christmas offering although it really belongs at Easter especially as the “Hallelujah Chorus” celebrates Christ’s resurrection! Unfortunately, the Big Three leave little room for others although the Bavarian State Opera just this week performed Saint-Saëns’s virtually unknown Oratorio de Noël with Ailyn Pérez, Benjamin Bernheim and Etienne Dupuis.

I’ve never heard Berlioz’s Enfance live; I’m sure it’s done occasionally in New York City but it’s not yet crossed my path. I did have a wonderful chance 25 years ago that I botched. Charles Mackerras led the work with the Orchestra of St. Luke’s at Carnegie Hall in December 1995 with superb Berlioz singer Lorraine Hunt (pre-Lieberson) as Marie. For some now-unknown reason, I didn’t go!

I have managed to hear all four of today’s soloists, two of them in Berlioz! D’Oustrac and Testé were Ascagne and Panthée in the magnificent Les Troyens conducted by John Eliot Gardiner at the Châtelet in 2003. It was a life-changing afternoon and while the DVD mostly does it justice the unique sound of the superb period-orchestra and vibrant chorus in the house was unforgettable.

D’Oustrac’s early career primarily focused on baroque music (I heard her first in a Madrid staging of Torrejón y Velasco’s La purpura de la Rosa), but she has more recently performed lots and lots of Berlioz. She starred in Béatrice et Bénédict in Brussels and at the Glyndebourne Festival as well as in a concert performance at the Paris Opéra under Philippe Jordan.

For that same company in 2012 she participated in Sasha Waltz’s nice dance version of Roméo et Juliette which I had seen during its initial run there five years earlier. The French mezzo has even performed the edition of Gluck’s Orphée et Eurydice that Berlioz created for Pauline Viardot!

Jordan also led her Troyens Cassandre in the Tcherniakov production which I haven’t seen yet: it didn’t look so promising and I have my doubts about how suitable d’Oustrac might be in that demanding dramatic role. Plus I had already heard Ekaterina Semenchuk‘s powerful Didon with the forces of the Mariinsky Opera at Carnegie Hall. Perhaps I’ll check out one of her Mort de Cléopâtres before watching the Paris Troyens?

One of d’Oustrac’s biggest triumphs was as Cybèle in the 2011 revival of the legendary Les Arts Florissants production of Lully’s Atys. As the spurned goddess, she turned the title character into a tree; he was played by Swiss tenor Richter. Although both he and d”Oustrac star in the DVD (currently OOP), neither unfortunately made the trip to the Brooklyn Academy of Music when Atys returned there.

I found her most recent local appearance in Handel’s Theodora with Les Arts Florissants not so successful.

Richter too is a Béatrice vet, having sparred as Bénédict with Greta Thunberg’s mom (aka Malena Ernman) at the Theater an der Wien. And he also did Troyens at the Paris Opéra: Hyllus in the Herbert Wenicke production in 2006. As all four of today’s Enfance singers have performed Early Music, it’s not surprising that my only Richter encounter was as a dulcet Acis in Handel’s Acis and Galatea at the Salzburg Pfingsten Festspiele with Marc Minkowski and Les Musiciens du Louvre.

A Frenchman despite his very English name, Crossley-Mercer earlier this month sang Jupiter in Rameau’s Platée at the Theater an der Wien in the splashy Robert Carsen fashionista production which was videotaped without an audience for future release. When Carsen first mounted it in 2014, Les Arts Florissants brought it semi-staged to Lincoln Center with Crossley-Mercer (oft-celebrated on Barihunks) again as Jupiter.

Of course, he too has performed in Béatrice, as Claudio with today’s Emmanuel Krivine (a noted Berlioz specialist who rarely conducts opera) at the Comique in Paris and has often sung Brander in La Damnation de Faust including the Opéra’s most recent version with Jonas Kaufmann and Sophie Koch.

Of the four, Testé (regularly heard these days with his wife Diana Damrau) seems to have rarely performed either Berlioz (after the Gardiner Troyens) or early music although he admirably sings the title role on Christophe Rousset’s fine recording of Lully’s Roland.

Enfance can be downloaded by clicking on the icon of a square with an arrow pointing downward on the audio player above and the resulting mp3 file will appear in your download directory.

For those who’d still like some Messiah (part one only, please), Yannick Nézet-Séguin leads a starry, decidedly un-HIP version with the Philadelphia Orchestra available here.