On the 21st of this month Romanian soprano Virginia Zeani will celebrate her 95th birthday and Trove Thursday salutes her versatility with two markedly different 20th century works: Menotti’s The Consul and Mascagni’s Il Piccolo Marat, one of many collaborations with her husband Nicola Rossi-Lemeni. 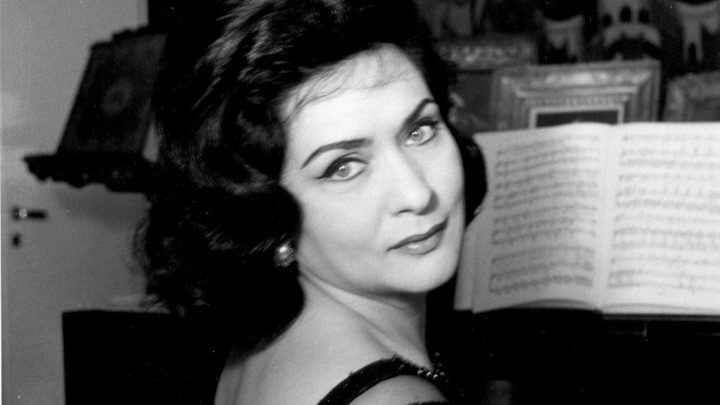 Zeani made few commercial recordings so her sizable reputation is due to the wide circulation of many broadcasts from her varied career. Like many she rose to prominence in coloratura bel canto operas like Lucia di Lammermoor and I Puritani. She starred in a number of modern revivals including Donizetti’s Maria di Rohan, Verdi’s Alzira, and Rossini’s Otello; she made one of her very rare New York City appearances as Desdemona in the last when the Rome Opera visited the Met in the summer of 1968.

She would eventually move onto to heavier repertoire singing numerous performances of Aïda, Manon Lescaut and Fedora among others.

Her very first operatic appearance was in La Traviata in 1948 and that was the work in which she made her “belated” Met debut in the lavish Cecil Beaton production which had 29 (!) performance the opening season at Lincoln Center. According to Irving Kolodin’s decidedly mixed review, Zeani claimed to have already sung nearly 600 Violettas and the ever-pointed critic felt Zeani’s best days in the role had passed. A “pirate” recording of her debut exists.

Could Zeani have really so many Violettas in 18 (by then) years? I wonder and was reminded of a pithy anecdote in Rasponi’s The Last Prima Donnas recounted by Gina Cigna who when asked by Leyla Gencer if she’d ever sung Norma replied “Yes, Madame—only over 500 times!” Could that have truly been the case in the 16 seasons that the Bellini role was a feature of Cigna’s career? Color me diva-doubtful in both cases.

Zeani did perform a third time with the Met but not at Lincoln Center: she was Elena in the company premiere of I Vespri Siciliani which was presented in concert as part of an all-Verdi Festival in Newport, Rhode Island during August 1967.

Other than just two Traviatas and the Rossini Otellos at the Met, the only other local Zeani appearance I’ve uncovered was Cleopatra in Handel’s Giulio Cesare opposite Cesare Siepi in 1958 for the American Opera Society. She made her debut at La Scala in that same role appearing there with her soon-to-be husband Rossi-Lemeni.

Like his wife, the Italian-Russian bass had only a brief Met career of just one season but he was an important fixture during the 1950s at both the San Francisco Opera and Lyric Opera of Chicago. Mascagni’s Marat became a particular specialty of the pair who performed it from the early 1960s through the mid-1970s.

They appeared quite often together in works as diverse as Rubinstein’s Demon, Der Fliegende Holländer, Les Contes d’Hoffmann (in which they both sang four roles), Montemezzi’s L’Amore dei Tre Re, Mefistofele and Pizzetti’s Assassinio nella cattedrale which they premiered at La Scala in 1958. They even recorded Pergolesi’s comic two-hander La Serva Padrona!

Given how sparse Zeani’s US career had been, it might seem ironic that she’s spent the last 40 years here. She and Rossi-Lemeni were invited in 1980 to join the faculty of the Jacobs School of Music in Bloomington, Indiana. After he died there in 1991, Zeani continued to teach for many years until she retired to Florida where she lives now. I’ve lost count of the many American singers who studied with Zeani who credit her great importance in their development.

Her final appearances were at the San Francisco in 1982 when she made her debut with the company as Mère Marie in Poulenc’s Dialogues des Carmélites in a cast that included Leontyne Price, Régine Crespin and Carol Vaness. Zeani had, of course, created the role of Blanche in the work’s world premiere at La Scala 25 years earlier.

The year before that farewell she performed on the east coast for the final time in a memorable Newark concert that featured a number of farewells: both Franco Corelli and Ferruccio Tagliavini sang in public for the last time. This wretched-quality video exists of bits by Zeani, Corelli and Tagliavini but you miss other highlights like Jerome Hines in “Ole Man River” and Klara Barlow’s “Liebestod!”

The Consul premiered 70 years ago at the Schubert Theatre in Philadelphia while Il Piccolo Marat will turn 100 in 2021.

Menotti: The Consul (in Italian)

Both the Mascagni and the Menotti can be downloaded by clicking on the icon of a square with an arrow pointing downward on the audio player above and the resulting mp3 files will appear in your download directory.

The archive which lists every Trove Thursday offering since the beginning in alphabetical order by composer was just recently updated.