A broadcast of Weill and Brecht’s pungent Die Dreigroschenoper 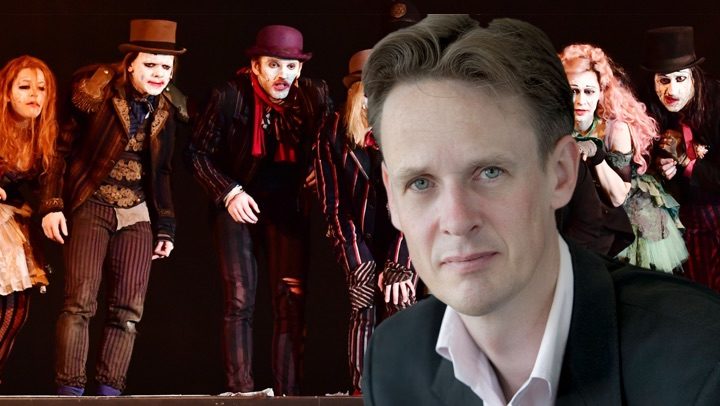 After devouring all 28 spellbinding episodes of Babylon Berlin I couldn’t let go of Weimar just yet so Trove Thursday indulges me with a broadcast of Weill and Brecht’s pungent Die Dreigroschenoper with Ian Bostridge, Dorothea Röschmann, Angelika Kirchschlager, Hanna Schwarz, Florian Boesch and HK Gruber who both sings and conducts.

Season one of the irresistibly complicated, jaw-droppingly lavish Babylon (streaming on Netflix) includes a long sequence set during a 1929 gala performance of Dreigroschenoper at the Theater am Schiffbauerdamm where the work premiered the year before. Highly recommended for addition to one’s bingeing list.

Ages ago I bought then adored the near-definitive 1958 German CBS recording with Lotte Lenya; I rarely felt the need to listen to another version, so I hadn’t heard the famous Off-Broadway/Marc Blitzstein Threepenny Opera until this week!

I was surprised how much I liked it as I’d always imagined it would be too sanitized and bland. Although the perversely nice Macheath doesn’t work at all, the rest of the cast, including Lenya, Jo Sullivan and Bea Arthur, is swell.

If one wants the work in English though, I prefer the previously long-unavailable recording of the 1976 Public Theater production. Its fiercer translation along with Raul Julia’s cruelly insinuating Macheath capture the work much more intensely than the Blitzstein. Ellen Greene’s Jenny, however, might not be to everyone’s taste.

The last time I attended a Dreigroschenoper occurred nine years ago at the Brooklyn Academy of Music. As it was performed by Brecht’s own Berliner Ensemble, what could go wrong? As it turned out, almost everything as it was very poorly sung and Robert Wilson’s predictably glacial production served the biting work not at all.

Weill and Brecht’s theater piece, of course, has an essential early opera antecedent as it was based John Gay’s 1728 The Beggar’s Opera which in turn was partly a slap against the highfalutin Italian opera seria by Handel and other itinerant composers that dominated the London scene for years.

In the mid-20th century Benjamin Britten put together a realization of the Gay which was filmed by the BBC and in it one can enjoy Heather Harper and Janet Baker going at each other as Lucy and Polly.

Another Beggar’s arrangement this one by Richard Bonynge and Douglas Gamley, was recorded by Decca and its divas Dames Joan Sutherland and Kiri Te Kanawa riotously duel in what was Gay’s droll allusion to Handel’s feuding “Rival Queens” Francesca Cuzzoni and Faustina Bordoni.

Weill and Brecht’s spicy version of this same catfight is surely one of the score’s highlights, and Röschmann (who is especially smashing throughout) and Kirchschlager really give it their all. What listeners will think of Bostridge as Macheath I can’t guess.

Anyone not familiar with Peter Brook’s striking film of Beggar’s Opera with Lord Laurence Olivier as Macheath can check it out albeit with Spanish subtitles!

Dreigroschenoper can be downloaded by clicking on the icon of a square with an arrow pointing downward on the audio player above and the resulting mp3 file will appear in your download directory.

In addition, nearly 300 other podcast tracks are always available from Apple Podcasts and iTunes for free, or via any RSS reader. The archive listing every “Trove Thursday” offering since September 2015 in alphabetical order by composer was updated recently.