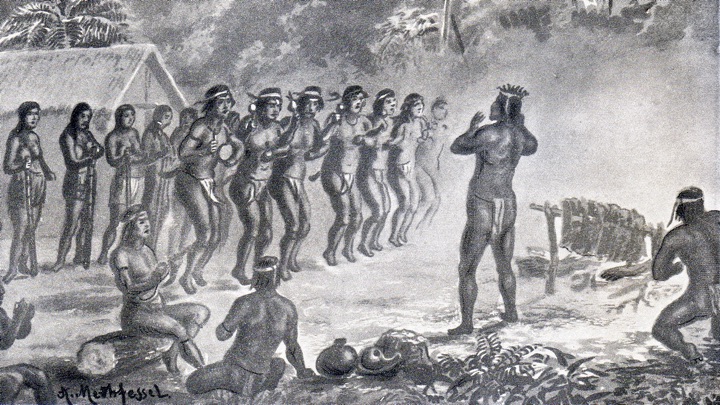 As our nation convulses struggling to deal with decades of racial injustice, operas that traffic in unfortunate cultural stereotyping have increasingly come under scrutiny. Brazilian composer Gomes’s 1870 work features as its hero Pery, an indigenous “noble savage” who rescues the white European heroine from the clutches of a threatening rival cannibal(!) tribe. Their inevitable love is, of course, threatened, but his selfless bravery and necessary baptism save the day!

Photos of Gibin from this 1964 production or even worse of Placido Domingo in Werner Herzog’s mounting of Guarany from the mid-1990s unfortunately present Pery in full MGM Indian drag replete with feathered headdress and darkened skin! 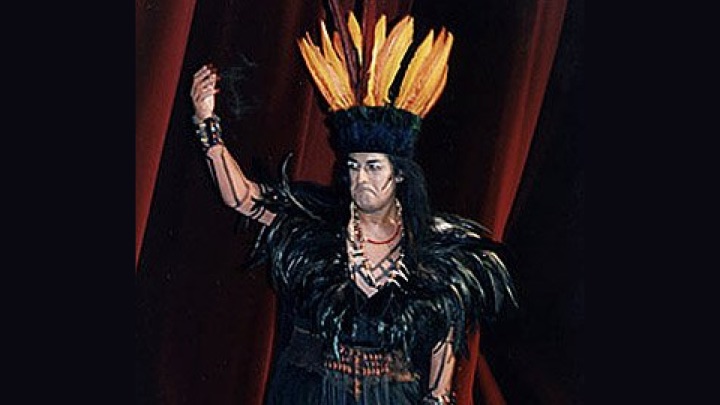 The first few works of Gomes were mounted in Brazil but the composer soon journeyed to Italy and Guarany (dubbed an opera-ballo although its extensive Brazilian-flavored dance music is often cut) had its very successful premiere at La Scala when the composer was 34. Most of his other major works—Salvator Rosa, Maria Tudor and Fosca (no relation to Sondheim’s Passion, by the way)—also had their first performances in Italy. They are all written to Italian libretti, but his final opera Lo Schiavo which premiered in Rio de Janeiro had a Portuguese text.

Both Liszt and Verdi praised the composer and his operas were initially produced worldwide but despite their melodic appeal they never gained a long-lasting foothold. However, several excerpts were widely performed and recorded. Enrico Caruso and Emmy Destinn collaborated in a famous Guarany duet…

while the bass aria from Salvator Rosa was frequently programmed at Sunday Night Concerts at the Met during the first half of the past century. José Mardones performed it at four different such galas.

Today’s Pery, Brazilian tenor Gibin is likely best known for two noteworthy events during the late 1950s. First, he replaced Franco Corelli in EMI’s recording of Puccini’s La Fanciulla del West opposite Birgit Nilsson who was herself not the label’s first choice for Minnie.

Then in February 1959 he was Edgardo in the now-legendary broadcast of Lucia di Lammermoor from Covent Garden that documented the epochal role debut of Joan Sutherland that had actually occurred several weeks earlier. The Lucia premiere had featured Kenneth Neate (who?) as her hot-headed lover substituting for the originally scheduled tenor who cried off ill. I’ve not been able to discover who was La Stupenda’s original Edgardo but surely Gibin too was brought in at some point to save the day.

Gibin would then appear for two seasons with New York City Opera, debuting as Radames in 1961 and later he was Luigi in Il Tabarro and Don José in a new production of Carmen the following year. San Francisco briefly beckoned in 1965 for Dick Johnson opposite Marie Collier followed by a single Andrea Chenier.

I’d have wagered that he had never appeared at the Met but I would have been dead wrong—there was a one-off as Radames when he was torn between Lucine Amara and Fiorenza Cossotto during the 1972 June Festival!

While he had a spotty career at the Wiener Staatsoper of mostly single performances of big roles, his tenure at La Scala lasted seven seasons and was intriguingly varied. As in Vienna he made his debut in Milan as Calaf opposite Nilsson-–his Austrian Liù had been Teresa Stich-Randall—but he then often wandered off from his standard dramatic tenor repertoire to appear in Boris Godunov, Doktor Faust, and Katerina Ismailova, the last in Italian opposite Inge Borkh. His most surprising Scala detour came in Schumann’s Das Paradies und die Peri, perhaps in prescient anticipation of his Guarany role!

One of the more amusing aspects of Gibin’s international career that is for nearly all of his appearances outside Brazil, he was known as Giovanni Gibin as one presumes João might have been too challenging. Calling Christoph Perick!

The same year as today’s Guarany Gibin appeared in Rio in his signature role of Dick Johnson opposite Magda Olivero in yet another opera with questionable “Indian” representation. I’m including several of their scenes together as an addendum.

Guarany and the Fanciulla excerpts can be downloaded by clicking on the icon of a square with an arrow pointing downward on the audio player above and the resulting mp3 files will appear in your download directory. 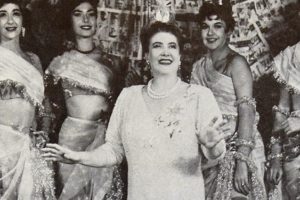