Love, loss, and what I sang

Sunday is Handel’s 335th birthday, an event Trove Thursday celebrates with Rodelinda, Regina de’Longobardi, one of the composer’s most popular works. 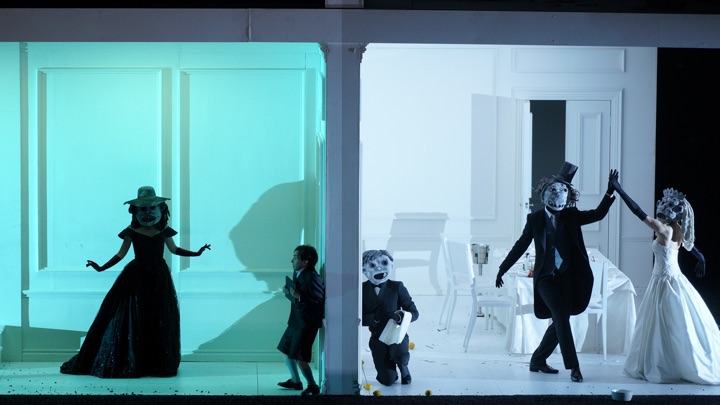 Handel’s many operas had languished unperformed for decades until the Göttingen Handel Festival revived Rodelinda in 1920. That production began a movement that eventually resulted in Handel operas now regularly being presented at nearly every opera house worldwide. The festival marks its centenary in May with a new staging of Rodelinda!

Rodelinda, with Giulio Cesare and Tamerlano, make up the remarkable trifecta that Handel premiered in less than a year. The final one of the three to be written, it features a relatively straightforward story of lust and redemption featuring six compelling characters particularly those intertwined in its central love triangle: Rodelinda, her banished husband Bertarido and the usurper Grimoaldo.

Between 2004 and 2011 the Met presented Rodelinda 22 times; while a variety of singers appeared in its other four roles, every Met performance to date featured Renée Fleming and Stephanie Blythe as the Queen of Lombardy and her sister-in-law Eduige in Stephen Wadsworth’s grandly effective production. Will we ever see it again?

Since 2013, the English Concert has presented Handel operas and oratorios annually at Carnegie Hall and this season is Rodelinda’s turn. Lucy Crowe, who has been singing the title role a lot lately in Claus Guth’s production—Madrid, Frankfurt, and recently Amsterdam—performs it again on May 3 with Joshua Ellicott as Grimoaldo and the apparently inescapable Iestyn Davies as Bertarido.

Rodelinda might be the only Handel role Cuberli performed; if not, it is the only one I’ve ever encountered a recording of. Two years before this broadcast from Italian radio, husband and wife Langridge and Murray portrayed another pair of romantic rivals in Trove Thursday’s offering of Mozart’s Lucio Silla.

John Angelo Messana was one of the first American countertenors to make a splash internationally. He was Tolomeo in the historic 1979 English National Opera revival of Giulio Cesare with Valerie Masterson and Janet Baker which remains available in the Trove Thursday archive.

Fagioli who, I believe, hasn’t sung in the US since Cavalli’s Giasone with the Chicago Opera Theater in 2010 will be Arsace in Handel’s Partenope with the San Francisco Opera this summer co-starring fellow countertenor Jakub Jozef Orlinski as Armindo.

Gauvin doesn’t come to New York very often but appears with the Orchestra of St. Luke’s next month at Carnegie Hall in Beethoven’s Mass in C.

While still in grade school, I always tried to find opera on television which was no easy task but occasionally on Sunday morning Camera Three would present a half hour dedicated to a well-known diva. I remember both Beverly Sills and Fiorenza Cossotto singing arias and there was also one with Horne performing these three arias for Bertarido from Rodelinda, certainly the very first time I heard any music from this great work.

Both Rodelinda broadcasts and the Horne arias can be downloaded by clicking on the icon of a square with an arrow pointing downward on the audio player above and the resulting mp3 files will appear in your download directory.

The archive listing all “Trove Thursday” offerings in alphabetical order by composer was updated to include all material as of early February 2020.