Today’s Trove Thursday was originally scheduled for February 27, which would have been Mirella Freni’s 85th birthday, but instead we remember today the beloved soprano who passed away this past weekend in Puccini. 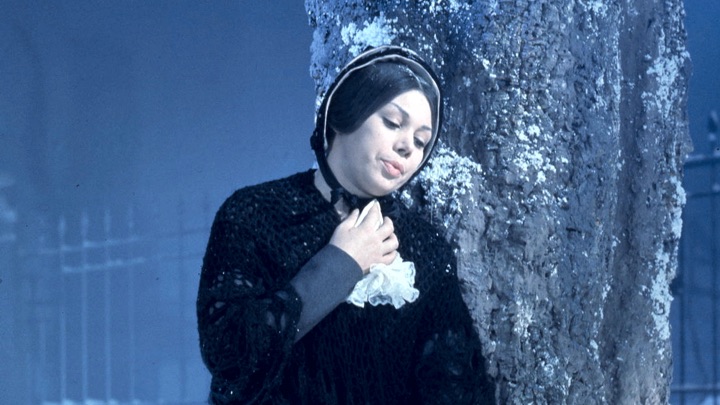 We will hear La Bohème with Luciano Pavarotti conducted by Carlos Kleiber and her only onstage appearance as Cio-Cio-San in Act III of Madama Butterfly.

Freni was a favorite from the very beginning and eventually became an important number of “firsts” for me. Her Nozze Susanna dominated the very first reel-to-reel “pirate” I purchased during high school.

And she was one of the stars of the first “big-league” event I ever attended: the 25th Anniversary Gala of the Lyric Opera of Chicago in 1979. So less than two years after the complete Kleiber Bohème posted today took place I got to hear for myself her and Pavarotti perform the first-act arias and duet!

At the time Freni was in Chicago for Faust (which was later televised), her first opera with a US company in more than a decade due to a long-running tax issue. She had reappeared though in New York and Washington during 1976 with visiting ensembles: the Paris Opéra, La Scala and the Berlin Philharmonic. It’s puzzling though that it took more than three years after Faust for her to return to the Met in 1983 as Elisabetta in Don Carlo.

I inevitably traveled to New York for the Verdi, but I had managed with far less effort to hear her again before then. A presenter who had brought Pavarotti to Cincinnati with much success wanted to try again, so he arranged a recital for Freni at Music Hall in March 1980.

It was a lovely concert which included (per my rusty memory as the program has long since disappeared) “Caro mio ben,” “Gretchen am spinnrade” “Dove sono” and some songs by Rachmaninoff. Shockingly, the event sold only a few hundred tickets, leaving enormous Music Hall nearly empty. Freni didn’t seem to notice and performed graciously (with, I believe, her husband Leone Magiera) in a rare US recital appearance.

Coming of age while Freni wasn’t performing in the US, I feared I might never hear her live. So, looking back, I’m astonished that I was able to attend 13 of her performances over a 33-year period! Somewhere I remember reading that the Met return was to be a new production of Mascagni’s Il Piccolo Marat with Plácido Domingo and Nicolai Ghiaurov, but that of course never happened. I didn’t attend the very first Don Carlo but a later one followed the next year by a second visit to Chicago for Tatyana in Eugene Onegin (coupled with Kiri te Kanawa as Arabella).

A decade after the Chicago gala I finally got to hear Freni and Pavarotti in a complete Bohème when I visited for Kleiber’s Met debut in January 1988, one of the most exciting performances I’ve ever attended. I was planning to hear her Mimi earlier though: I was in New York in October 1983 and arrived at the Met for Bohème with Freni and Dano Raffanti. The poster outside however announced that Catherine Malfitano would instead be singing, so I fled.

Many memorable Freni encounters at the Met followed that extraordinary Bohème: a remarkable gala honoring the 25th anniversary of her, Alfredo Kraus’s and Ghiaurov’s debuts; her only US Desdemona (the third-act only) during 1991’s Opening Night; Falstaff; Adriana Lecouvreur; and Fedora followed by just a single act of Fedora on Opening Night 2002, the last time I heard her sing. I would have gone to her farewell in 2004 but I was out of the country, and although she made a brief appearance at Volpe’s 2006 Gala, she simply gave a touching speech.

I remember vividly also her Lisa in Pikovaya Dama at Carnegie Hall, an electric evening opposite Vladimir Atlantov and Dmitri Hvorostovsky in his NYC opera debut. Her verismo aria concert at Avery Fisher Hall that same autumn of 1991 was lustily cheered if frustratingly brief as she sang just a handful of 3-minute arias and even one of her encores was a repeat of something heard earlier.

Although Freni will best be remembered for her lovely and unaffected 19th and early 20th century heroines, I’ve always had a special fondness for her Mozart as well as her delightful performance of Piccinni’s La buona Figliuola which I much later discovered had been televised.

Both Freni-Puccini items can be downloaded by clicking on the icon of a square with an arrow pointing downward on the audio player above and the resulting mp3 files will appear in your download directory.

The archive listing all “Trove Thursday” offerings in alphabetical order by composer will be updated to include all material as of early February 2020.