How stable everything appears

Plink. A marble drops into a bowl. A brief yelp from glass, and a dozen, a hundred, a thousand years pass. Eventually the bowl is full of marbles, each one a tiny globe. 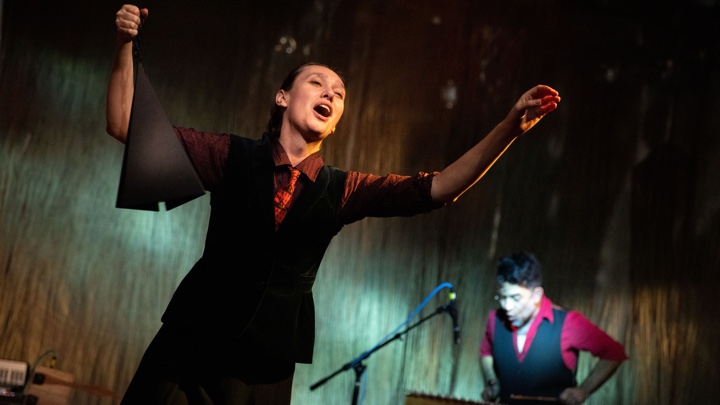 The stage for Gelsey Bell’s Morning/Mourning centers a ragtag collection of bowls. Some are filled with water, some empty, waiting for a finger to coax them to sing.

Singing bowls are funny, aren’t they? They’re an absence from which a voice emerges, an emptiness that sings. But they also involved with some sleight of hand. Each bowl is hemisphere only looks empty, directing our gaze towards emptiness, while being complete and whole in themselves. Turn one over, and you’ll have the surface of the earth.

Morning/Mourning, put on by the ever-innovative Prototype festival in a welcome return to form, is concerned with singing from absence, songs of lament and futurity in a world without us in it. But it’s also concerned with the way our absence may not threaten wholeness, when in terms of the earth and the universe, and what that might mean for us now.

Here’s the plot: Imagine a world with no more humans. They’ve been wiped out, raptured or disappeared or something— it doesn’t matter how, they’re gone.  What would happen? What would the earth do? How long would it take for us to be forgotten? What would remain of us? Shards of pottery, plastics, fossilized bones. The golden records inside the Voyager, which wouldn’t return for thousands of years. Eventually these things would disappear too.

Over the course of ninety tight, affecting, and varied minutes, Morning/Mourning spans from one day to 1.6 billion years after this imagined human extinction event, taking its cues from Alan Weisman’s 2007 book A World Without Us. There are no characters, no narrative, save for the mind-bending narrative of the earth and the solar system, in whose plots we barely make up a footnote.

Instead, five actor-musicians armed with synths, bells, harp, tabor, accordion, water bowls and bird-call whistles, present vignettes: mold overtakes cities, nuclear power plants meltdown, domesticated dogs go extinct, trees live on and on, new species rise to replace humanity. And then they break into song, sometimes celebrating, sometimes elegizing, or simply describing, a world that will inevitably move forward without us. Throughout, the actors drop marbles into a bowl, representing the years. 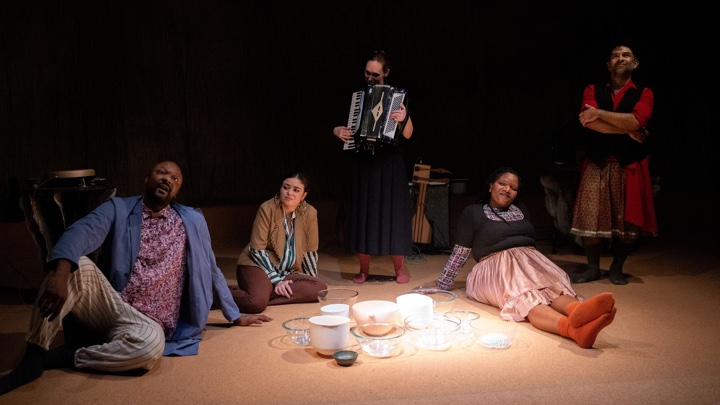 Tara Ahmadinejad’s direction was clear and striking; from the marbles, which acted as a sonic and visual leitmotif that organized the entire performance, to the streamlined movements and play with levels that utilized the tiny HERE stage, Ahmadinejad captured something elegant and surprising, while keeping her actors light and flexible throughout.

Bell, who provided the libretto, music, sang, and played, seems to be one of these enviable renaissance women who can create something at once daring in both vision and style and utterly unpretentious. Combining light extended techniques with some popular sensibilities, spanning timbre and instruments, Bell’s score was in turns, sexily sinister, celestial and otherworldly, synth-y and noisy, folksy, operatic, and on and on.

Each number was varied, reconfiguring the ensemble vocally and instrumentally with room for tight and thrilling harmonies and plenty of environmental sounds. Singing was at once indispensable to its storytelling, and only one of a continuum of sounds that Bell drew upon.

The score’s scope was nearly as ambitious as its timeline’s, in other words, but each musical number felt linked by clear, direct melodies (which walked the narrow line between going exactly where you wanted it to go and moving in surprising directions) and a sort of folksy sensibility. There was an earthiness to the music that kept the actors’ toes in grounded emotional soil, even as the timeline accelerated moving us further and further from a world with a familiar shape.

The ensemble, a group of vocalists and multi-instrumentalists made up of Bell, Ashley Pérez Flanagan, Justin Hicks, Aviva Jaye and Paul Pinto, each shone in individual moments, but were especially impressive as they flowed in and out of each other’s lines, sidling up on each other with harmonies, passing gestures between, and moving like their own organism.

Each is a standout artist in their own right: Broadway and other high-profile opera credits abound, and most are composers themselves, but this was truly an ensemble piece, taking each of their vocal talents, from Flanigan’s sultry mezzo and Hick’s stratospheric tenor to Pinto’s rhythmic declamation and Jaye’s soft soprano and thrumming harp, and creating something larger than all of them. They also helped to arrange the work; another reminder that opera is by nature collaborative.

But Bell, dressed in a velvet vest and flowing skirt, often drew my eye with her laser-like intensity; her voice, sometimes whispery and rocky other times swelling with such sparkling resonance that it threatened to escape her, anchored the piece.

Bell has an ear for mordant humor, a certain dryness that only made the moments of sincere wonder more finely sketched and allowing a sweetness that wasn’t saccharine. The initial years of destruction are treated with a sly triumph and many moments unexpected comedy. Dogs and cows, it seems, will not do well in the new order, but house cats will prevail (of course they will).

The libretto is full of sadness and anger, too, though for the ways that humanity has profoundly and nearly (but not totally) permanently damaged our earth, the way the legacies of colonialism have been written into the rock so deeply that only millions of years of erosion could erase it. Humans have wrought so much destruction, and even our passions and pleasures seem silly and very dearly bought.

There is a sort of terror in recognizing how much more we need the earth than it needs us. It’s like that feeling of missing a step in the dark, in that second where we fear the ground may no longer exist.

But within and around this mourning, there is possibility, futurity, and something like redemption, something that Bell doesn’t have to say. That unmoored feeling of insignificance is also a type of freedom; a freedom to imagine a world where humanity doesn’t choke itself out of existence, but instead thinks of itself as part of a continuum of life.

We can content ourselves with being footnotes in the book of the universe. Knowing that we can’t erase the wounds we’ve made on our world and on ourselves, we can find ways to let those wounds scab over and join the forward motion. We can turn our faces to the morning.

One of the later numbers wonders at “how stable everything appears, though we conceive and can see— nothing lasts forever.” I left the theater singing it, and have had it in my head since. It’s a cliché, and yet, turned over in Bell’s hands, it isn’t empty at all.

The clue whose meaning we avoid