It's nasty world, Shostakovich seems to say, where life alternates between boring and terrifying. 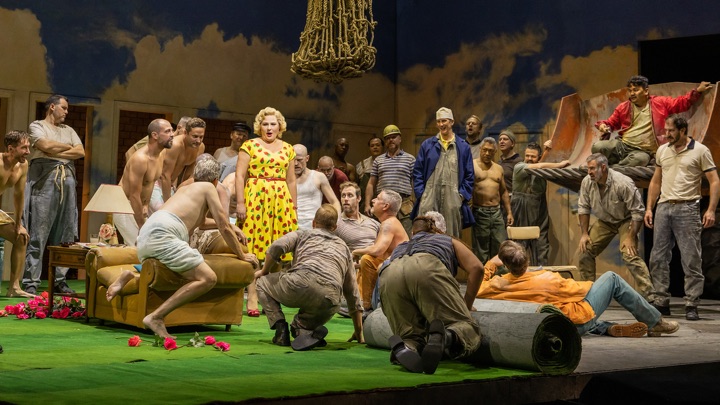 In 1994, Green Day produced one my favorite depictions of boredom in their song “Longview”:

Bite my lip and close my eyes
Take me away to paradise
I’m so damn bored, I’m going blind
And I smell like shit

Billie Joe Armstrong, with his signature sneer, perfectly captures the abject squalor of suburban disaffection and sexual frustration: dirty, reeking, stagnant, a frame of mind where, as he sings later in the song, even “masturbation’s lost it’s fun” but there’s nothing better to do.

Katerina may not know exactly what she wants, but she knows this isn’t it: stuck with a violent father-in-law, Boris Timofeyevich, who masks his own lust for her by attempting to enforce her fidelity to his son, Zinovy Borisovich, a weak little twerp of a man who is largely absent while he runs the family business with his father. In her boredom, new employee Sergei, who is as nasty as any of these men, begins to look like a good prospect for an affair: at least he’s unfamiliar. Sex and multiple murders ensue.

Graham Vick’s production (revived Thursday night), which like “Longview” also arrived in 1994, is completely over the top: combining Soviet surrealism with a sense of squalid ultra-violence.  This show has everything: shirtless hunks, a (nearly literally) blinding disco ball the size of a small planet, people popping out of piles of trash and from inside fridges, three types of vehicles driving on and offstage, cranes lifting cars and actors, an early masturbation fantasy scene that feels like an evil version of the situation described in The Weather Girls’ “It’s Raining Men, ” and what I feel reasonably confident in saying is the highest rate of hip-thrusts-per-minute in any Met production to date. 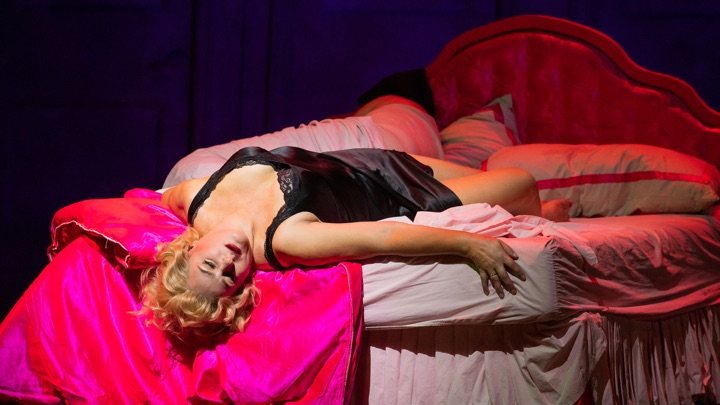 t’s disgusting, overwhelming, and profoundly sexual without ever being sexy. The third act drags on, with a lengthy party scene, digressions into side characters, and an exceedingly awkward set change done without music so we could hear every creak and thud of the mechanics, but mostly I like it. I’d always prefer something over the top, even when it veers into over-wrought or missteps, to drabness.

With its mounting bags of trash and smell of decomposing corpses, Vick’s production anticipates (and for all I know perhaps it literally inspired) the marvelous joke from the first season of Slings and Arrows:  Pretentious hack director Darren Nicholls decides to take “something rotten” bit in Hamlet very seriously and strews the stage with piles of smelly garbage and rotten banana peels (Everyone hates Darren Nicholls—obviously—who wouldn’t with a gorgeous, young Paul Gross right there?).

For Vick, it’s more like taking the age-old aphorism “men are trash” very seriously.  But in this case, the tawdriness is built right into the text of Lady Macbeth of the Mtsenk, so this accumulation of vulgarity feels fully appropriate.

In an opera where all the characters are varying degrees of nasty, lascivious, low-down brutes, Lady Macbeth lives and dies by its Katerina, the only thing close to a sympathetic character apart from a small part, The Old Convict, in the fourth act.

Svetlana Sozdateleva, in her Met debut, proved herself to be a fine actress, but for me, her voice never quite achieved escape velocity. Fighting as it was with Shostakovich’s army of brass, brief glimpses of topspin quickly displayed strain.

For the character this worked fairly well, as Katerina’s anxiety and desperation mounted, but more ease especially in the upper register or when she had the chance to slow down a bit would have been welcome. Despite these vocal challenges, Sozdateleva is very much to be congratulated on how she handled the difficult dramatic task of Katerina, who has to sell a long and fairly graphic sex scene that starts as a rape and ends with her in love. 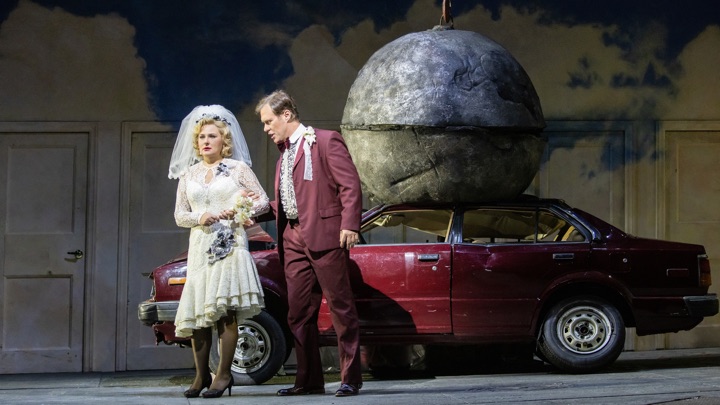 The fourth act gave her a chance to take of her heels (seriously, her feet must have been screaming), and display some lovely moments of stillness before she dragged her prison rival Sonyetka into the cesspit with her.

As the father-in-law from hell, Boris Timofeyovich, bass-baritone (or should I say bass-barihunk, as his pages there popped up when I googled him) John Relyea, his deep buttery voice emerging from out of the side of his mouth, sneering and slouching to hide his handsomeness, was perfectly menacing in the way of low-level abusers— terrifying to those they have power over, but ultimately petty thugs that suck up the air in living rooms around the world.  He was a highlight of the show, and the second half felt slightly empty without him.

Brandon Jovanovich, who looks like an even-taller Jim Carrey, sang Sergei with gusto and clarity, though he occasionally became a bit pinched on top, gave a vanity-free performance of Sergei’s horribleness.

This is not a part I would want to play, with Sergei’s participation the near gang-rape of a poor worker woman flown in a cage via crane, or his “seduction,” ahem, of Katerina in the first half. Jovanovich made him profoundly gross and, crucially, just attractive enough feel plausible as an interest for Katerina.

Nicolai Schukoff, his brassy and stalwart tenor bursting forth from beneath goofy glasses, was in fine voice as Zinovy Borisovich. Rounding out the main cast were Rodell Rosel, perfectly creepy and pathetic as the Shabby Peasant, and two other debuts, Maria Barakova as Sonyetka, who lit up the fourth act with a lurid gleam and looked and sounded lush in a highly-impractical-for-Siberia mesh top and mini-skirt combo (I may or may not own a very similar outfit; readers may search me out in the club to confirm), and an delightful turn from Alexey Shishlyaev as the Police Sergeant, enjoying his spotlight in a little number that had very ACAB energy (Good for Shostakovich).

Goran Juri? slid nicely from funny to lascivious as the Priest, while finally, and most beautifully of all bass-baritone Alexander Tsymbalyuk, brought humanity and sensitivity to the Old Convict. He sang wonderfully last night, refreshing the last half with sincerity.

It felt most of all, like the orchestra’s night, with Keri-Lynn Wilson at the podium in a gorgeous black coat slashed with white. Wilson’s direction was energetic almost to the point of overwhelm as she worked through Shostakovich’s slithering, wailing, screeching, and thrusting score (again, totally appropriate), though she could have pulled back to help out her singers, who were working very hard to be heard.

And, oh, to be a brass player in this opera! It was at times almost deafeningly loud, with brass stationed in the boxes, but they all earned their salaries for the year last night, especially the trombones, who may as well be a named character in the drama (it’s also been a great week for the bassoonists, with a series of gorgeous solos in both Medea and this!)

It’s nasty world, Shostakovich seems to say, where life alternates between boring and terrifying. Men are stupid, and cruel, while women who attempt to grasp at even a false promise of happiness end up dead and forgotten, thrown away like trash. Better to stay inside and be bored: watch a little tv, listen to a little Green Day, and fantasize about better lovers.