Sor Juana Inés de la Cruz is perfect figure for an opera; known, but not known enough, especially in English-speaking countries, with a life that involved plenty of love, poetry and tragedy. 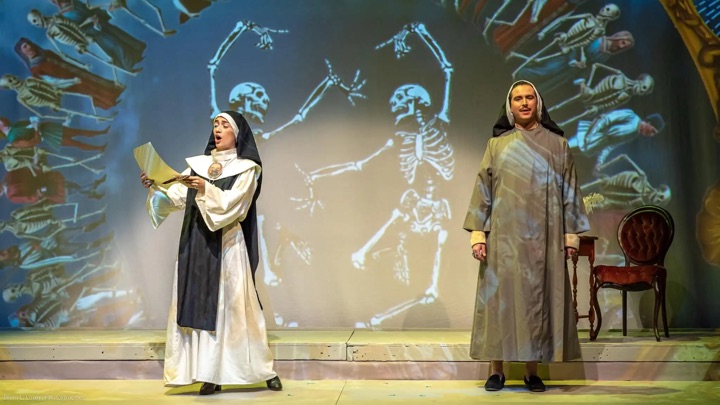 Alicia Gaspar de Alba and Lucero’s libretto, adapted from de Alba’s 1999 historical novel Sor Juana’s Second Dream, traces various scenes in the life of Sor Juana, focusing primarily on her emotional, intellectual, and, in this work, physical romance with the Vicereine of New Spain the Condesa de Paredes, who was also acted as her literary agent and publisher, along with the nun’s brushes with and eventual censure by officers Spanish Inquisition who were threatened by her proto-feminist critiques of misogyny and patriarchy.

She’s a perfect figure for an opera; known, but not known enough, especially in English-speaking countries, with a life that involved plenty of love, poetry and tragedy. Unfortunately, this libretto felt overstuffed, with nearly 20 named roles, two framing devices—one involving an allegorical character and the other involving a younger Juana—as well as flashbacks and -forwards throughout.

This, in addition to the many scene changes, and the occasionally sluggish conducting, led to a show that was both overlong and at times difficult to follow even with the synopsis in the program and supertitles. The opera is a little too close to its subject, often falling into overidentification at the expense of dramatic flow and historical nuance. It is shame that the majority of Sor Juana’s companions at the cloister were presented as jealous, petty, and anti-intellectual.

I don’t doubt that she was the victim of nun-on-nun cruelty, but it had the frustrating effect, so often found in biopics, of presenting every other character as ridiculously stupid or cartoonishly evil in order to highlight the exceptionality of the misunderstood main character. While Sor Juana’s brilliance is unquestionable, it was actually flattened by this choice. 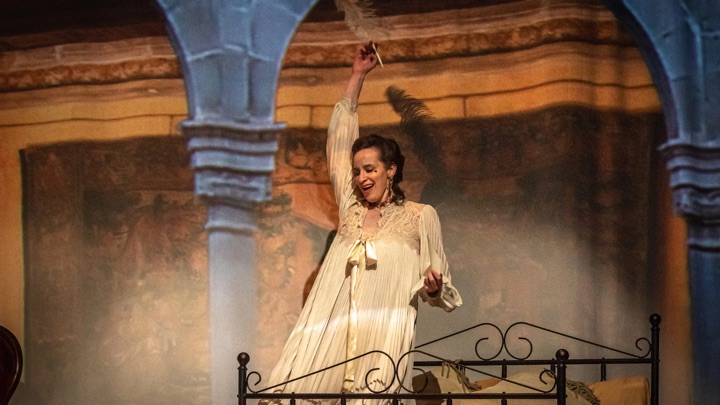 At its best, Lucero’s score is full of lyricism and passion, with inventive and varied instrumentation employing harp, ocarina, flute, and a broad palette of percussion that swelled to cushion these young voices. She also liberally uses small characters, giving almost all named parts moments of arioso singing, and producing tasteful and affecting duets especially for women’s voices.

The final duet between Sor Juana and La Condesa, a moment of queer fantasy in the most violently heteropatriarchal of all spaces, the Inquisition chamber, was soaringly beautiful, bringing out the very best of Lucero’s writing. I could see a cut-down version of this being a real hit—especially with student and emerging companies—as it would allow the beauty of Lucero’s score to shine forth without getting bogged down by length and granting deeper emotional richness and clarity to the libretto.

The real Sor Juana was caught in between the two ways of life offered to women under patriarchy: submit yourself to husband in the world or make an escape into the all-female academic space of the convent, forgoing children and mainstream society.

Because these women sidestep participation in the patriarchal project of lineage and children, and, as many scholars and queer women (and queer women scholars) have recognized, they enter a space in which love and care between women can be centered. Sor Juana, an academic prodigy and what we would know understand as a queer woman, ran towards this life.

In Lucero’s opera, Juana finds herself both free and constrained in the convent: she pursues her intellectual interests with abandon, but by continuing to engage with public life as an intellectual and artist, she violates in her fervor the unspoken rules that govern any female escape from patriarchy: you can opt out, live at the convent, have secret or not-so-secret love affairs with women, but once you’re gone, you have to stay gone. 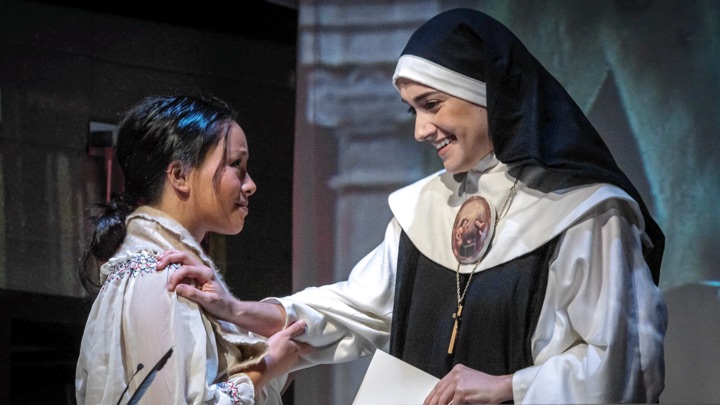 Juana refuses to stay “gone.” She wants it all: intellectual freedom and public recognition, spiritual devotion and fulfilling love. The problem is: because she’s done nothing but study, write, and create, now she’s more educated than women in general society are allowed to be. More importantly, she insists on using that education to criticize the structures of power.  As the inquisition closes in on her, Juana’s lover and patroness La Condesa is too far away to save her, even though writings are being circulated to acclaim in Spain.

Her ultimate punishment is a hideously cruel symbolic execution. She is forced to give up all intellectual pursuits, all her books and writing and spend the remainder of her life to acting as a caretaker to sick and dying nuns. In essence, this patriarchy visibly enforcing gender compliance: Juana must not only exit public life, she must also rigidly conform to a role dictated by her gender. In highly operatic and totally badass move of proto-emo defiance, she stabs her hand to sign her death sentence in her own blood.

Dell’arte is a company that is specifically designed to support emerging artists. Like student opera, it serves a pedagogical as well as artistic purpose—give up-and-coming singers the chance to work on their craft and have a few more roles under their belt. Singing is hard work; voices are unruly and take ages to mature. So, while this was not a vocally unassailable performance, the excitement lies in catching these voices at the beginning of their careers, and, we hope, hearing them develop in opera houses across the world.

As Juana, mezzo-soprano Flavia Darcie delivered a sound that promises to blossom into sable-y soft richness, taking on lovely color and clarity when she approached the higher end of her range. Soprano Anna Woiwood, as La Condesa, shone in her most dramatic moments, revealing a golden lyric sound and wielding fully-embodied emotive abilities. When the lovers came together in their final duet, each singer’s voice transcended itself, bursting open with passion and confidence.

Countertenor Roberto Colón brought a cool and smooth sound as the androgynous La Alma, a personification of the soul, with a darkness that added some pleasant opacity. I would be very interested to see how this voice develops. 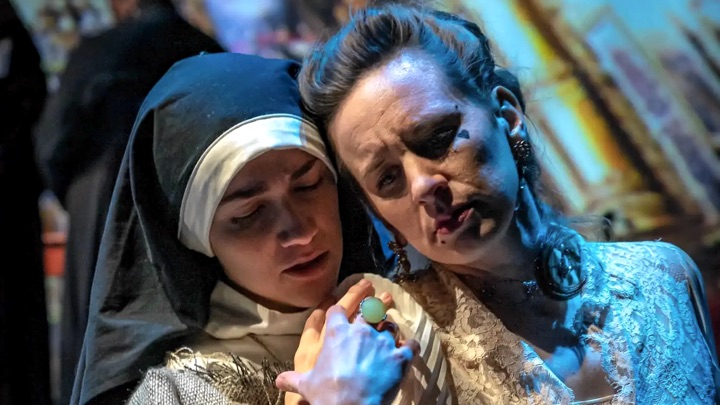 As a dastardly duo of catty nuns, Sor Rafaela and Mother Melchora, mezzo-soprano Alexa Rosenberg and contralto Kayla Faccilongo brought a bit of mean-girl humor, with Rosenberg especially displaying clever comic instincts and, as the night wore on, an increasingly nuanced sound.

Other villains of the misogynist male variety were played by Robert E. Feng, who brought presence and a bronzy baritone as Sor Juana’s erstwhile confessor Padre Antonio; Josephat Contreras, whose flexible tenor lent sympathy to his cowardly turncoat Don Carlos; and, finally, the lively Ai Ra as the cross-dressing and nearly mustache-twirling Bishop of Puebla. I look forward to seeing him in a comedy one of these days. Acting-wise, he’s got Don Basilio written all over him, though his voice might be a touch deep for it.

The standout voice of the night, for me however, was soprano Francesca Federico as Sor Andrea. She had immense presence and power, wrapped in a mournful sweetness that perfectly softened the edges of her tone. This was a memorable and unique sound, matched by Federico’s easy and natural dramatic instincts.

In addition to this and my many other gigs, I’m a teacher and director of undergrad singers. As teachers know, there is something addictive and exciting about hearing emerging artists and watching them experiment vocally and dramatically.

Dell’arte clearly knows this too, and I commend them for casting a diverse troupe of talented singers (many of whom seem like real smarties, too, with two Fulbright scholars in the Juana cast!) and for programming a recent work written and composed by two women of color.