The clue whose meaning we avoid

We watch Peter Grimes being made into a deviant— a process that can take place through the mechanism of the law, but often happens outside of it through social processes. 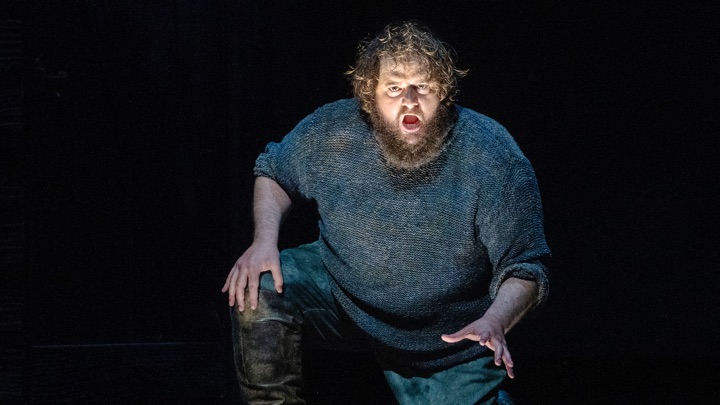 In the opening scene of Benjamin Britten’s 1945 tale of mounting dread and suspicion Peter Grimes, we see the title character in a makeshift court. Grimes has a problem, you see: his young male apprentices keep dying off, through accident or negligence or maybe something even more sinister that it must remain unspoken. He’s been called to an inquest—one of these quotidian and yet also monumental occasions in which people walk in and criminals walk out.

We watch him in this moment being made into a deviant— a process that can take place through the mechanism of the law, but often happens outside of it through social processes. He may have been cleared of his charges at the inquest, but the town has judged him, and that judgement goes beyond and above the law.

Haunted increasingly memories of his last apprentice, who died of thirst at sea while they drifted for three days, and by the town’s mounting hatred, Grimes breaks down completely, going mad before fleeing the angry mob to sink his own boat.

Throughout the opera, we see how this change in status, from insider to outsider, from citizen to deviant erodes, reshapes, and ultimately disintegrates the identity of its title character. The persistent refrain of Grimes’s (rhymes with “crimes”) name, then, becomes not just an accusation but a question: is there such a person as Peter Grimes, or has he ceased to be a person at all, only an avatar of evil for the town? 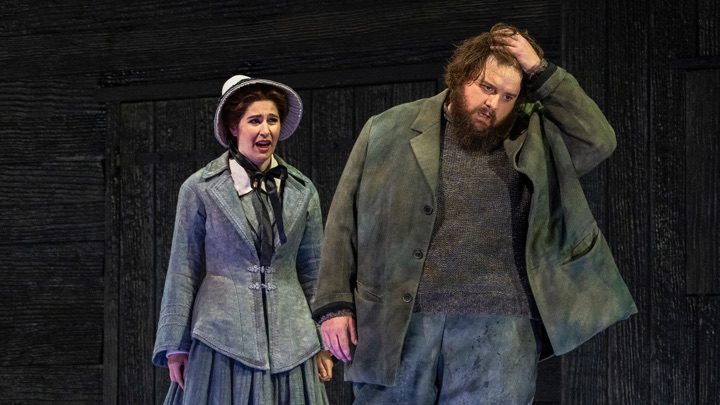 In response to his isolation, Grimes determines to work harder than ever, abusing his new apprentice John in the process to the point where bruises are apparent on the boy’s neck, and eventually, driving him so hard to work that the boy slips and falls to his death. In spiting the Borough’s judgement, however, Grimes become only more reprehensible and crueler, letting another boy die on his watch.

By the third act, Grimes, in ultimate irony, seems to have become everyone else in the town; singing snippets of Ned Keene and the chorus’s gloriously disturbing sea shanty from the first act, as well as snatches of his own former arias.

Ellen, his misguided paramour, cannot knit him back together again. She is defined by these arts—knitting, embroidery, each are acts of integration, enmeshment, and also distinctly feminine arts, the same femininity that it seems, would temper Peter. For this widowed teacher, embroidery is a way to imagine a “silk and satin life” that she wants for her students and herself.

As the opera suggests in her stunning third act “Embroidery” aria, however, women can attempt to {knit integrate} men together, fixing their lives, but in that process, they can stitch over things they don’t want to see about the men that they love: “Now this broidery affords the clue whose meaning we avoid.” 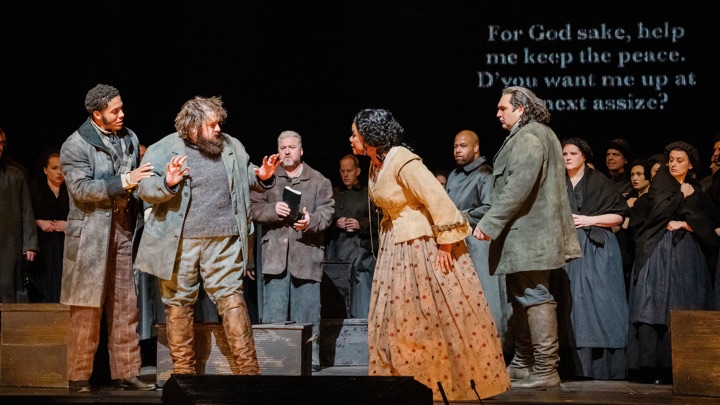 It’s unclear, watching this now, how to take this central character. Britten and Pears each framed Grimes as an antihero, encapsulating the struggling of an individual against society—if not actively heroic, Grimes is at least tragically ambivalent in his morality.

At the same time, Grimes is violent and careless with the lives of his apprentices, whom he owns through the enslaving institution of indentured servitude. Each child may have technically died by accident, but the children were in his care and he put them in the situations that caused their deaths.

AAnd yet as we hear in his luminous “Now the Bear and the Pleiades” aria, and the recurring, soaring lines of ‘What harbor shelters peace,” Peter is also a sensitive person with dreams of a future filled with kindness. It’s the sad fact of his increasing entrenchment in outsider-ness that he cannot see a way to this future without continuing mistreat and overwork those around him.

Those who accuse him aren’t much better: the named townspeople of the Borough all have vices of their own, varying in severity. Ned Keene is a frivolous snake-oil salesman, Swallow and Boles are lechers and drunks, Mrs. Sedley is a nosy true-crime fanatic with a nasty laudanum habit, Auntie is a madame who pimps out her “nieces.”

The only problem is, they seem to be right to be suspicious, even if they frame this suspicion in selfish and petty terms. This makes it difficult to disentangle what is reasonable suspicion that attends the death of a child, and what is borne of simple dislike and distrust of a man who lives alone and refuses to hew to town customs.

The Met are in desperate need of a new production for this extraordinary rich musical and psychological text; John Doyle’s grim presentation has only one gimmick that becomes overplayed after the first time it’s executed: the black stage can expand and contract, windows opening and shutting for singers to peer through.

While there are moments where I like it—the townspeople watching through windows panopticon style is occasionally striking— most of the time it’s a boringly literal take on the claustrophobia of small towns. The set is also frustratingly creaky, nearly ruining Ellen and Peter’s a capella duet in Act I with various scrapes and bumps in a bit of smooth-brained technical direction: Don’t move things during a capella numbers! Student opera companies know this!

Certainly, as Grimes, Allan Clayton deserves the honor of a new production, as he was positively superb in the role. He sings with clarity, sensitivity and always with beauty, even as Grimes descends into madness. The lovely “Now the Great Bear and the Pleiades” showed Clayton’s fine-tuned control and brought out a tenderness and innocence in Grimes that made him briefly sympathetic, while his mad scene in the third act was spellbinding and perfectly pitched.

He’s well cast vocally, and he has an actor’s ability to transform his frame to suit the character’s mood: sometimes he appears almost cuddly, then he draws himself up to imposing height to terrorize Ellen and John, before sagging in dejection, wrung out like a rag.

In the role of Ellen Orford, Nicole Car’s soprano was a fine match for Clayton’s voice. Her timbre is pure and silvery, almost without color, but with intense presence and a ping-y cut that soared over the rich fabric of the score. She skillfully navigated Ellen’s dawning sense of suspicion and horror, and her “Embroidery” aria showed flexibility across a large range and a sense of clearly-drawn emotions, even if those emotions were conflicted.

The other lead is Balstrode, a friend of Peter’s and often his main defender.  At the end of the show, he also abandons ship pretty quickly, however suggesting the final suicide plan out of enigmatic emotional motives. Is this mercy or merely a washing of hands? Stalwart bass-baritone Adam Platchetka captured this ambiguity well, crafting a Balstrode who is both sympathetic to Grimes but also somewhat weak-willed in the face of the Borough.

Rounding out the male cast, was the ever-funny Patrick Carfizzi as Swallow, Chad Shelton, in very fine voice as Bob Boles and a charmingly rakish Justin Austin as Ned Keene, along with Tony Stevenson and Harold Wilson as the Rev. Adams and Hobson, respectively.

Denyce Graves made an unsettling Auntie from a vocal standpoint, which certainly added to the spooky ambiance of the Borough; her sound was harsh and unwieldy throughout, and though she looked as glamorous as ever, the voice stuck out from the overall texture and made for an unsteady foundation for the quartet with Ellen and the nieces (Brandie Sutton and Maureen McKay) in act two.

Nicholas Carter’s animated conducting suffused the performance with suspense and energy, the thrums with menace, which is periodically intercut with Britten’s special brand of breathtaking beauty, the glittering harps and haloes of strings breaking through the dense brass and wind writing like crepuscular rays onto the surface of the sea.

As the three hours hastened by under Carter’s exuberantly physical direction, I found Peter Grimes and its questions about identity in relation to society, as well as its interest in suspicion and collective shunning, increasingly urgent in the age of online media, particularly for the way that children are often wrapped up in these questions—not as people but as symbols.

John, Grimes’s second apprentice, is utterly voiceless in the story, his death is barely acknowledged by the townspeople except as a way to justify their hatred of Grimes, which feels less like justice for a victim but a scapegoating of all the town’s evils onto a symbol.

Grimes may be guilty, but marking him as deviant and murderous and casting him out is only a temporary fix for the Borough, papering over cracks in the moral foundation that will surely come back to light after the next storm.

A different type of self-consciousness altogether